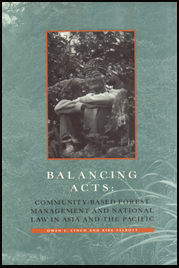 1. Quoted in Madhav Gadgil et al., "Draft Background Notes for the Committee on National Forest Policy and Forest (Conservation) Act," (unpublished manuscript (dated 1989) on file at the Centre for Science and Environment in New Delhi), 39.

5. For a detailed discussion of the causes and ramifications of this natural disaster, see Pinkaew Leungaramsri and Noel Rajesh, eds.. The Future of People and Forests in Thailand After the Logging Ban (Bangkok: Project for Ecological Recovery, 1992).

6. For a detailed discussion of the causes of this natural disaster, see Marites Danguilan Vitug, The Politics of Logging: Power from the Forest (Manila: Philippine Center for Investigative Journalism, 1993).

7. "Huge Toll from South Asia Floods Tied to Environmental Degradation," The Christian Science Monitor, July 29, 1993: 1; and Binod Bhattarai, "Worse Floods in Living Memory Claim Hundreds of Lives," Inter Press Service, July 29,1993. It must be noted, however, that some analysts are not convinced that deforestation was the primary cause of these floods. Citing the inherent geological instability of the Himalayas, they contend that slumpage and mass wasting are inevitable and that floods are a regular occurrence in this part of the world: those that occurred in the summer of 1993 just happened to be worse than usual.

10. For a systematic presentation and refutation of these stereotypes, see Owen J. Lynch, Whither the People? Demographic, Tenurial, and Agricultural Aspects of the Tropical Forestry Action Plan, Issues in Development (Washington, D.C.: World Resources Institute, 1990).

14. Robert Repetto, The Forest for the Trees?: Government Policies and the Misuse of Forest Resources (Washington, D.C.: World Resources Institute, 1988), 17-23.

20. This shortcoming is prevalent in most countries with tropical forests. Lynch, 1990, see note 10.

21. Though the transmigration program was initiated in 1905, a full one-third of the total number of resettlements took place in the two year period 1984-1986 as part of the Third Five-Year Plan. The World Conservation Union (IUCN), N. Mark Collins, Jeffrey A. Sayer, Timothy C. Whitmore, eds.. The Conservation Atlas of Tropical forests, Asia and the Pacific (London and Basingstoke: Macmillan Press Ltd., 1991), 36-37.

25. This process was the basis of Garrett Hardin's famous treatise, "The Tragedy of the Commons," which postulated that such situations are promoted when community-based resource management systems are delegitimized and states fail to manage the resource. When community-based tenure is weakened, sustainable production is often undermined and falls victim to the race for short-term gain by anyone and everyone. In effect, public land and other public resources belong to no one in particular and thus to everyone in general.

26. The distinction is important and the need for a standardized use of the term is highlighted in David Western, et al, eds., Natural Connections: New Perspectives in Community-Based Conservation (Washington, D.C.: Island Press, 1994). Of twelve case studies presented in the book, only one was actually initiated and directed by the local community involved. This is not to criticize the authors or the experiences they described and analyzed. Rather, it is an effort to promote a limitation on the use of the term "community-based."

37. For a discussion of the history of forest depletion in England, see Chapter 10, "England," in John Perlin, A Forest Journey: The Role of Wood in the Development of Civilization (New York and London: W.W. Norton & Company, 1989), 163-245.

50. For a fascinating analysis of the political and economic origins of the Spanish-American War see Luzviminda Bartolome Francisco and Jonathan Shepard Fast, Conspiracy for Empire: Big Business, Corruption and the Politics of Imperialism in America 1876-1907 (Quezon City, Philippines: Foundation for National Studies, 1985).

52. Philip Hirsch, "Forests, Forest Preserves, and Forest Land in Thailand," The Geographical Journal, 1989, vol. 156, no. 2:166-74. These local leaders were described as feudal chiefs whose "forests were recognized, in general, as properties to be maintained... and passed on to their heirs. According to the property rights of the day, the chiefs allowed concessionaires to exploit the teak forests. The deterioration of the forests was evident and disputes among the concessionaires were widespread." Thailand Development Research Institute (TDRI), Thailand Natural Resources Profile: Is the Resource Base for Thailand's Development Sustainable? (Bangkok: Thailand Development Research Institute, 1987), 83.

53. There is considerable confusion as to when, and pursuant to what law, the claim was made. Amara Pongsapich cited Ministry of Justice Document 74/3425 and wrote that "the first land law" promulgated on April 1,1892, indicated that "all land belonged to the King." Amara Pongsapich, Action Plan for a Private Tree Farm Development Program, Thailand: A Socio-Commercial Approach, Socio-economic Aspects, Annex 10 (Bangkok: PACMAR, Inc., (in association with A&R Consultants), 1989), 5. Other studies cited 1899 as the year. TDRI (Thailand Development Research Institute), Thailand Natural Resources Profile: Is the Resource Base for Thailand's Development Sustainable? (Bangkok: Thailand Development Research Institute, 1987), 83; and Lert Chuntanaparb and Henry I. Wood, Management of Degraded Forest Land in Thailand (Bangkok: Kesetsart University, 1986), 79.

65. The 1985 law also provided for a proportional system of land subclassification. Fifteen percent of the kingdom's total land area was to be subclassified as conservation or protection forests. Conservation forests include forest reserves that have been designated as wildlife sanctuaries or national parks, entities that contain most of the kingdom's remaining forests. By 1988, more than 20 million hectares, or 40 percent of the kingdom's total land mass, had been designated as "forest reserves." Amara Pongsapich, "Action Plan for a Private Tree Farm Development Program, Thailand: A Socio-Commercial Approach," Socio-economic Aspects, 1989, Annex 10, Table 10.6 (citing Royal Forestry Department statistics).

66. There were also 31 wildlife sanctuaries encompassing a total of 2,470,054 hectares and 59 national parks covering a total of 3,041,599 hectares. An additional 22 parks, covering 1,136,543 hectares, were pending approval. If the National Forestry Policy was to be fully implemented, however, an additional 1,048,566 more hectares would need to be designated as conservation forests.

76. If it was addressing a serious environmental concern, the 45% figure would presumably apply on an island-to-island, as opposed to an archipelagic, basis. As of 1995, however, more than 75% of the islands of Bohol, Basilan, Cebu, and Negros were identified for classification as agricultural and certification as alienable and disposable. On the other hand, more than half of the total land area in provinces with high concentrations of indigenous occupants was identified for classification as permanent forest. These provinces include Agusan del Sur, Ifugao, Mountain, Kalinga-Apayao, and Occidental Mindoro. Philip- pine Department of Environment and Natural Resources (DENR), Philippine Forestry Statistics, 1993 (Quezon City: Forest Management Bureau, 1994).

77. The World Bank, Philippines: Environment and Natural Resource Management Study (Washington, D.C.: The World Bank, 1989), 10 (Paragraph 2.4). In Paragraph 2.2 the study noted that "of the area presently classified as A&D land, it appears that at least 13% and, according to some recent estimates, perhaps 35% has slopes in excess of 18%. Conversely, as much as 28% of Forest Lands is estimated to have slopes under 18%, although much of this is found at higher altitudes."

85. Government of Sri Lanka, 1991, 102 and 198, see note 82. This estimate was made in 1984 by the Land Division of the Irrigation Department. The total area under chena cultivation is believed to have increased since then.

86. Ibid., 61 and 63 respectively. The loss of biodiversity, by contrast, was blamed on the national policies that promote and subsidize the clearing of land for agriculture.

87. Forest Ordinance, Sections 6 and 7. Similar prohibitions are found in the Fauna and Flora Protection Ordinance of 1938 (Sections 3 to 10).

101. For a more complete discussion of the history and current status of community forestry legislation in Nepal, see Kirk Talbott and Shantam Khadka, "Handing it Over: An Analysis of the Legal and Policy Framework of Community Forestry in Nepal,' Issues in Development (Washington, D.C.: World Resources Institute, 1994).

103. The Integrated Social Forestry Program was launched by Presidential Letter of Instruction No. 1260, dated July 28,1982. The letter instructed the then Ministry of Natural Resources and other concerned government bureaucracies to establish a program that included a leasehold component for all citizens who resided within the "public" forest zone on or before December 31,1981.

105. See Department of Environment and Natural Resources Administrative Order No. 2 of 1993.

106. Republic Act No. 7586 was approved on June 1,1992. The Implementing Regulation is Department of Environment and Natural Resources Administrative Order No. 25, series of 1992.

107. Sec. 1, Article I, of the Department of Environment and Natural Resources Administrative Order No. 02, series of 1993.

112. Kamon Pragtong and David E. Thomas, "Evolving Management Systems in Thailand," in Mark Poffenberger, ed.. Keepers of the Forest: Land Management Alternatives in Southeast Asia (West Hartford, CT: Kumarian Press, 1990), 172. A similar "amnesty" was issued by the Philippine government in 1975. Whether these amnesties actually encourage migration into forest areas is a matter of debate.

116. Sections 4 and 31 of the 1978 Constitution guarantee Thais equal protection of law. Section 33 requires that "fair compensation shall be paid in due time to the owner" of the property right. "The amount of compensation... shall take into consideration the mode of acquisition, nature, and condition of the immoveable property, as well as the cause and purpose of the expropriation, so as to serve social justice." Section 18 of the Expropriation of Immoveable Property Act of 1987 requires that "Compensation shall be given to... the legitimate owner or possessor of land to be expropriated."

127. World Resources Institute, in collaboration with the United Nations Environment Programme and the United Nations Development Programme, World Resources 1992-93 (New York: Oxford University Press, 1992), 287 is the source of the smaller estimate, which is based in part on satellite imagery. The larger estimate is found in Table 2.9 (p. 44) of the 1991 Papua New Guinea National Report. It includes an estimate of 200,000 hectares a year for the "mainly disturbance" outcomes of subsistence agriculture. See p. 42 for additional estimates.

132. Commission of Inquiry into Aspects of the Timber Industry in Papua New Guinea, The Barnett Report (Hobart, Australia: The Asia-Pacific Action Group, 1990), 18.

134. Chapter No. 205, Sections 5(1) and (2). Emphasis added. The underlined phrases could be read as limiting the extent of customary rights, rather than as a limitation on the State's assertion.

135. A prominent lawyer in Papua New Guinea, Peter Donigi, filed a legal challenge against the national government concerning its assertion of ownership of minerals and petroleum resources. Donigi wanted the court to rule that mineral and petroleum deposits belong to customary resource owners. The case was dismissed in February 1992 in the National Court for lack of standing.

142. Louise Fortmann and Diane Rocheleau, for example, noted that during a workshop on agroforestry, women made "their most valuable contributions and their strongest expressions of interest" during the smaller group activities. "During the frequent and even heated exchanges of questions, answers, criticisms, and suggestions among men in larger sessions, the women were silent - even when topics directly relevant to them... were under discussion." Louise Fortmann and Diane Rocheleau, "Women and Agroforestry: Four Myths and Three Case Studies," Agroforestry Systems, 1990, vol. 2:252-272.

144. For examples of the working of this dynamic, see the case studies in David Western and R. Michael Wright, eds.. Natural Connections: Perspectives in Community-based Conservation (Washington, D.C. and Covel, CA: Island Press, 1994).

145. Maasai elders resisted entering into a written agreement and this proved to be a "costly mistake given the government's abrogation of every term." David Western, "Ecosystem Conservation and Rural Development: The Case of Amboseli," in David Western and R. Michael Wright, eds.. Natural Connections: Perspectives in Community-based Conservation (Washington, D.C. and Covelo, CA: Island Press, 1994), 15-52.

146. Despite an agreed-upon revenue sharing formula, the West Bengal community-forest management projects have experienced misunderstandings between local communities and the forest department over how to determine that agreed-upon revenue. Forest Protection Committees agreed to receive 25% of the net sales of timber grown within the joint management area. Difficulties have arisen over how to determine the net.