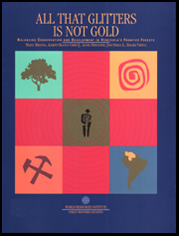 The forests of Venezuela's Guayana region are rich in biodiversity, hydroelectric potential, capacity to protect drinking water and store carbon; they are a home for many of the nation's indigenous peoples. For these reasons, economic development in this ecologically and socially sensitive region must be undertaken with great care and in full consideration of the potential risks for the environment as well as the potential benefit to local communities. Our analysis leads to three principal findings:

1. The benefits from logging and mining are not being fully captured at the national or local levels.

Until now, the government has not benefitted much from either logging or mining in the Guayana region. Logging subsidies and low royalties mean that little revenue accrues to the national treasury from timber extraction, and local communities benefit very little from any employment in the forestry sector. Currently logging contributes only 3 percent of revenues through royalties and area fees, and one third of the timber extracted is not taxed.

The government has lost revenue by failing to tax between $50 million and $100 million worth of gold from small-scale mining, although such operations do provide work for approximately 30,000 miners. Even national parks and monuments can help generate funding for conservation activities, but in the few parks where fees are collected the revenue is not sufficient to contribute significantly to conservation activities. Furthermore, any revenues derived from the development of forest resources accrue directly to the national treasury and are not directly re-invested in the conservation of these resources.

2. Logging and mining currently cause considerable negative environmental and social impacts in the Guayana region.

Both mining and logging in the Guayana region have taken a toll on the forests and the people living in them. A combination of logging practices and squatter settlements has damaged an estimated 2 million hectares of public forest lands in Venezuela, more than half of the 3.5 million hectares held in timber concessions, independent of any damage created by small-scale gold mining.

Gold mining has been undertaken almost entirely by small-scale miners, whose use of mercury and environmentally destructive machinery has significantly increased sedimentation in the region's main water courses, contamination of fish, and destruction of habitats. By 1991, mining in the region had increased the sediment load of the Caroni River by a factor often. In addition, both small-scale miners and at least one foreign company have come into conflict with indigenous communities.

Much of the environmental damage is potentially avoidable, but the Venezuelan government, particularly the Ministry of Environment, lacks adequate capacity to implement regulations and monitor forest activities. The Ministry has 3 technical forestry personnel to patrol nearly 3 million hectares under concession in the Guayana region alone and only one inspector for the mining concessions. The Ministry of Mines has equally limited personnel and resources to monitor its mining contracts in the region. Furthermore, the government agencies generally do not coordinate efforts to conserve forest resources and sometimes subordinate long-term conservation priorities.

In addition, the government has not developed its current plans for the region in a participatory manner. Sometimes information about development activities has been closely guarded, divulged only at the last minute in a hasty public consultation, as was done in the case of the Imataca Zoning Plan. Similarly in the development of the Guri electrical transmission line, which is now in its construction phase, indigenous communities affected by the project were not consulted and the environmental impact assessment was not made public.

3. Expansion of logging and mining activity is likely to bring fewer benefits and higher environmental and social costs than expected.

Economic growth is critical to Venezuela's future development, but unwise use of the nation's forest resources will only yield growth at significant costs. Clearly, mining will generate higher revenues for the treasury than logging, but mining is inherently unsustainable. While large-scale mining will provide some jobs for small-scale miners, it will not be able to absorb all of the region's miners. And assuming that large-scale mining does bring an economic boom for the region, these benefits and economic growth will be short-lived because the mines will close in 20-40 years.

One government response is to foster the development of cooperatives among small-scale miners, which would facilitate the legalization of operations. The government also plans to create a Superintendency of Mines, which would oversee both small-scale and industrial miners. Unless the superintendency has significant regulatory capacity, however, the government would still be unable to monitor and regulate the environmental impact of these activities.

So far, the mining industry has taken the lead in developing standards for mining in Venezuela, an effort that is being coordinated by the Venezuelan-American Chamber of Commerce. Although innovative standards and guidelines for gold mining are necessary tools for protecting the environment, they will be ineffective without provisions in place for implementation. Indeed, Venezuela already has some far-reaching legislation that recognizes the need to protect watersheds and forest resources, but mining activity in the region is in breach of existing regulations. Lacking the administrative capacity to implement clear regulations on mining and the financial leverage to demand adequate guarantees on the companies' performance, Venezuela risks additional environmental damage. No matter the size of the operation, mining companies should not be relied upon to monitor the environmental impacts from their activities voluntarily. Instead, before it contemplates an increase in activity, the government must use regulations, oversight, and adequate performance bonds to control the negative environmental and social impacts of extractive activity that already exists in the region.