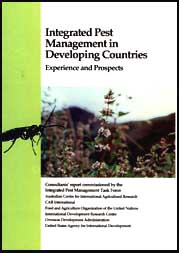 The consultants were appointed from 1 October 1989. Some members of the Consultants' Group met on 6-8 October at FAO, Rome, and all from 6-10 November at the offices of the International Food Policy Research Institute, Washington DC, where they were joined by Gabrielle Persley, Secretary of the Task Force. In Rome the Group benefited greatly from discussions with Lukas grader, Chief of the Plant Protection and Production Division, FAO, and members of his staff. There were also useful discussions with participants at a subsequent meeting of the FAO/UNEP Panel of Experts on Integrated Pest Control. The Group is most grateful to FAO for providing administrative assistance in Rome.

In Washington the Consultants' Group was joined by William Furtick of USAID and W. Barclay of Greenpeace for part of the time. The Group is greatly indebted to the International Food Policy Research Institute (IFPRI) for providing excellent facilities for the meeting, and for secretarial assistance. Particular thanks are due to Ms L. Goldberg, IFPRI's conference co-ordinator, for these arrangements.

The Group is very grateful to the International Development Research Centre (IDRC) Regional Office in Singapore for hosting firstly, the consultant group meeting on 1-3 December 1989, and secondly, the Task Force meeting on 4-5 December 1989. Without the excellent support of IDRC and ACIAR secretarial staff, much of the deliberations would not have been documented.

The membership of the Consultant Group is given in Appendix 2. The consultants are grateful to many people for helpful advice and information, particularly S. Barbosa, C. Farrar, D. Mackenzie, S. Mboob, G. A. Norton, G. Schulten, M. Vaughan and A. Youdeowei. The Group is also most grateful to scientists who, at very short notice, completed pest management questionnaires. Their names are given in Appendix 5.

Published by the Natural Resources Institute, the scientific arm of the Overseas Development Administration, for the Integrated Pest Management Task Force

Short extracts of material from this book may be reproduced in any non-advertising, non-profit-making context provided that the source is acknowledged as follows:

Cover photograph: Muna weed, used as a natural insecticide in Peru (by courtesy of the International Development Research Centre)

No charge is made for single copies of this publication sent to governmental and educational establishments, research institutions and non-profit-making organizations working in countries eligible for British Government Aid. Free copies cannot normally be addressed to individuals by name but only under their official titles.