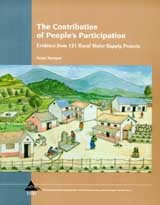 Field observations have led many people to believe that beneficiary participation in decisionmaking can contribute greatly to the success of development projects. When people influence or control the decisions that affect them, they have a greater stake in the outcome and will work harder to ensure success. But the evidence supporting this reasoning is qualitative-some would say anecdotal-so that many practitioners remain skeptical. Even when they accept that participation is important, the qualitative approach does not offer much guidance on how to promote participation in large-scale programs. Therefore three questions need to be addressed systematically: To what degree does participation contribute to project effectiveness? Which beneficiary and agency characteristics foster the process? And, if participation does benefit project outcomes, how can it be encouraged through policy and project design?

To answer these questions, researchers studied evaluations of 121 completed rural water supply projects in forty-nine developing countries around the world. Eighteen different agencies supported the projects, which employed a variety of technical approaches. The results are clear: beneficiary participation contributed significantly to project effectiveness, even after statistically controlling for the effects of seventeen other factors.

The results are based on quantitative and systematic qualitative analyses of data across projects and within the lifetime of individual projects, sometimes over a decade or more. The quantitative data came from content analyses done by two independent coders for each report, covering 149 variables. Intercoder reliability was high on key variables, and testing for so-called halo effects produced no significant change in the results. Preliminary correlation analyses and factor analyses to reduce the number of variables led to a model that applied the framework of collective action to management of rural water as a common property resource. To move beyond correlations among indicators toward causality, multivariate regression analysis was used to test the collective-action framework. Additionally, the twenty projects that were scored as most effective were analyzed to determine their key design features.

How Much Does Participation Contribute to Project Effectiveness?

Results obtained from quantifying levels of participation establish that participation contributed significantly to overall project effectiveness, even after controlling for eighteen direct and indirect determinants of outcomes. The proportion of water systems in good condition, overall economic benefits, percentages of the target population reached, and environmental benefits rose significantly with participation. Participation also helped assure equality of access to facilities, although its effects were less pronounced in this outcome than in the others already cited.

Not surprisingly, the analysis reveals that participation fostered individual and community empowerment. It also promoted new water-management and organizational skills in the community. Finally, it strengthened local organizations, which then went on to undertake other development activities.

One shortfall of the participation process deserves mention here. Although most projects identified women as a target group, only 17 percent of the projects achieved high levels of involvement by women. High levels of beneficiary participation did not necessarily mean that women's participation was high. Women in most rural areas face many constraints to participating in development projects, and unless their involvement was specifically targeted and resources to ensure it were invested, it did not occur.

The study examined how final outcomes were affected by the quality of outcomes at each of the stages of a project cycle, namely, design, implementation, construction, and maintenance. A series of multivariate regression analyses produced two major findings:

· Participation was the single most important determinant of overall quality of implementation.

· The impact of participation throughout the project cycle was significantly greater than it was during any single stage.

Statistics tell only part of the story. Individual projects had to be analyzed in depth to better understand how participation worked in practice and to evaluate uncoded agency factors. Four findings are worth highlighting:

· The forms of effective participation varied tremendously, ranging from representational committees of users to domination by leaders and elites, and from direct involvement in construction to supervision of contractors.

· Effective participation did not result when agencies retained control over implementation details-that is, the what, when, how, and where of implementation.

· Nongovernmental organizations (NGOs) figured in half of the success sample (that is, ten of the twenty most effective projects), although they represented only 15 percent of the total sample.

· Issues concerning physical infrastructure and technology have been addressed more effectively than ones concerning the social organization necessary for managing the physical works.

Participatory processes are nonlinear and iterative. The process interacts with intermediate outcomes, which influence the process, and so on. It is nevertheless possible to identify the critical elements of the participation process, as well as the determinants of the eventual participation levels of beneficiaries. These relationships were analyzed through multivariate regression analysis, which showed that the three intermediate elements most highly correlated with overall levels of beneficiary participation were:

Therefore participation is determined by characteristics both of the beneficiaries and of the agency and project.

At the beneficiary level, the two key characteristics determining participation were commitment before construction, or demand, and the degree of organization of the beneficiaries. When beneficiaries made a commitment before the project was implemented, they became involved in project activities, including investment in capital and recurrent costs. Projects flourished when the service provided matched what consumers wanted and were willing to pay for. Forms of organization-the other beneficiary characteristic important for participation-varied even within communities, but common to all forms were internalized, self-enforced rules and regulations that governed criteria for membership and access to (or exclusion from) the facility.

For agencies, the two most significant characteristics were relative autonomy and degree of client orientation. Three client-orientation strategies emerged as essential for effective participation:

· Making beneficiary participation a goal to be monitored and evaluated, and rewarding staff for achieving it

· Investing in building the capacity of local people, including providing information to help people make informed choices and allowing time for communities to organize themselves. The qualitative analysis revealed also the three most common hindrances to participation, caused by even some well-meaning agencies that tried to elicit participation:

· Unwillingness to give up control over implementation details

· A unwillingness to invest resources for building the community capacity or social organization to manage the physical infrastructure.

How Can Participation Be Encouraged through Policy and Project Design?

Sector policies, project design, and implementation strategies must change fundamentally in rural water supply programs. They must encompass a shift from centralized ownership of systems to local ownership and control. Approaches must change as well: instead of being supply-oriented, they must become demand-responsive and participatory. Achieving these shifts will require changes at the sectoral policy level and the community level.

Research for this study found several steps in the design of large-scale projects to be essential for effective outcomes: objectives must be clear and specific; financing mechanisms must be responsive to demand; a community self-selection process must be used to undertake water-improvement projects; the planning process must focus on learning and applying lessons in implementation; intermediary organizations that work to support communities must be clearly identified; and substantial investments in strengthening the capacity of community-based organizations must be made.

Several rural water projects financed by the World Bank are now moving forward; they are based on the principle of local participation, control, and authority, and supported by an approach to project design that emphasizes learning over blueprints. It is too early to draw conclusions about performance, but two facts are already evident. First, although large-scale projects can be designed with a built-in commitment to demand-responsive approaches and active "experimentation," there is no standard model for doing so. Second, in the absence of a standard model-that is, where learning relies on flexibility, adaptation, and necessarily short planning horizons-monitoring and evaluating are even more important for success than they are in traditional projects.