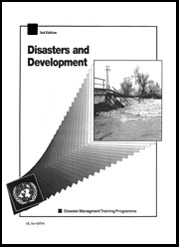 This discussion concerns the relationship of several concepts e.g. disasters, development, structural adjustment, mitigation and reconstruction. Several of these concepts may already be familiar to the reader and will already have been addressed in other modules in this series. However, readers may wish to review definitions of the less commonly used terms, particularly those associated with disaster management.

Disaster: The occurrence of a sudden or major misfortune which disrupts the basic fabric and normal functioning of a society, or community. An event or series of events which gives rise to casualties and/or damage or loss of property, infrastructure, essential services or means of livelihood on a scale which is beyond the normal capacity of the affected community’s ability to cope with out aid.

Preparedness: Administrative, individual and community action to minimize loss of life and damage, and facilitate effective rescue, relief and rehabilitation.

Developing and testing plans for responding to both warning and impact of such phenomena.

Assuring the rapid availability of appropriate material resources, transport and other equipment, and funds when and where needed.

Mitigation: Measures which lessen the impact of a disaster phenomenon by improving a community’s ability to absorb the impact with minimum damage or disruptive effect. The measures include both preparedness (see above) and protection of physical infrastructure and economic assets. Mitigation is generally considered to comprise two separate types of activities:

Structural Adjustment: Usually a discretionary or automatic response to an unsustainable balance of payments deficit usually involving a reallocation of resources between sectors and categories of expenditure (including savings). Although a pre-condition for most development financing, structural adjustment may result in economic contraction in the short term by suppressing demand and imports. It usually adversely affects employment and output. Adjustment may lower investment levels and saving ratios.

Q. Development is defined differently by different people. It is often defined as an improved or higher quality of life. Sometimes it is defined as increased disposable income. How do you define development?