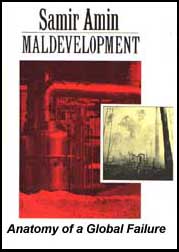 The idea that solidarity of the peoples of Asia and Arica would lead from mutual support in anti-imperialist struggles to positive economic collaboration in alternative moulds to 'dependence' and unequal North-South exchange, dates back to the Bandung conference (1955). The Non-Aligned Movement also adopted as one of its constant themes of word and deed the promotion of South-South relations. After the failure of the North-South negotiations over the plan for the NIEO, the South-South theme had a new burst of life, tinged-since the end of the 1970s - with a certain ambivalence, as Faysal Yachir has noted, since co-operation between Third World countries had the same role as that previously belonging to the NIEO, such as transfer of technology, opening of new industrial markets and availability of financial resources, leading to the adoption by the '77' of an agenda reproducing all the topics of North-South relations.

The sum of recent developments in South-South economic relations is far from insignificant. The facts are well-known and we borrow the essence of conclusions in Yachir's excellent study (La cooperation Sud-Sud, une alternative?, Dakar, FTM, 1983).

At the level of international trade, the salient fact of the past two decades or so is certainly the emergence of new countries as exporters of manufactured goods. Nowadays, the share of these countries - the so-called 'newly industrializing' - accounts for more than 10% of world trade in industrial goods. These exports are sent to the South and to the North (where they compete successfully against some well-established industries, such as textiles, and even some new industries, such as electronics, provoking neo-protectionist responses, despite the liberal language). The annual rate of growth in South-South trade - 15% since the mid-1970s - is far and away the clearest indicator of all the rates of growth in international trade. This not insubstantial change in the structure of world trade, reflecting the evolution of the new international division of labour, is, however, a factor for only a restricted number of countries, as 80% is accounted for by five countries of East and South-East Asia (a 'gang of four' - Korea. Taiwan. Hong Kong and Singapore - and then to a lesser degree. Malaysia) and four large Third World countries (India and Brazil and to a lesser extent Mexico and Argentina).

A close examination of the new factors will show that they differ from both the 'old' South-South trade or some other new phenomena related to the strategy of relocation by the multinationals.

There were some South-South exchanges as part of the former division of colonial labour. In Africa, for example, the Sahel region, as a 'second-rank' periphery, traditionally supplied food exports (livestock and cereals) to the first-rank periphery in the adjacent coastal areas. These flows were accompanied by massive migrations from the interior to the coast that, in the space of half a century (1930-70), changed the proportion between interior and coastal population from two-thirds and one-third to half-and-half. But this kind of complementarily belonging to colonial and neo-colonial spatial arrangements is declining, as we have noted.

There are further South-South exchanges that are expanding and entirely due to the multinationals' strategies of relocation. In addition to an import substitution role, the small industries controlled by foreign capital in such countries as Cd'Ivoire, Nigeria, Kenya, and so on, in Africa, Colombia and Costa Rica in Latin America, the Philippines and Pakistan in Asia, now export their surplus output to neighbouring territories. The explosion of the processing industry based on cheap manpower in the 'free zones' (of which Tunisia is a good example in the Arab region) is also part of this 'controlled relocation'.

The boundary between this second kind of South-South exchange and that originating in the 'nine powers' mentioned above is difficult to trace. A high proportion of the export of manufactured goods from the nine countries is, in fact, by subsidiaries of multinationals of the North. This is mainly the case for motor cars, electronics, and pharmaceuticals, 60% to 90% controlled by foreign multinationals in Latin America (including Brazil) and to a lesser extent in Asia (especially in regard to Korea and India).

In the mid-1970s, the latter factor inspired a thesis of 'sub-imperialism'. This was to some extent an expansion of phenomena that were not entirely new. In Africa the volume of exchange between South Africa and the countries of Southern Africa was of the same kind.

If this factor of the emergence of the 'nine' in world trade deserves special attention, it is perhaps precisely because it reveals new trends in the international division of labour. More than 40% of the manufactured goods of the 'nine' are producer goods, vectors, as we know, of technology transfer. Most of these exports come from three countries - India, Korea and Brazil which are also in the forefront of Third World exporters of engineering, sometimes more appropriate to Third World markets than the goods of their competitors in the North, just as these three countries are in the forefront of the emergence of 'Third World transnationals'. This phenomenon cannot be reduced to the simple effect of relocation controlled by the North's monopoly capital. There is some conflict - albeit at the mercantile stage - between capitals from North and South. It is a conflict that fuels the thesis of qualitative diversification within the Third World.

By contrast, South-South capital flows have not so far opened up any really new prospects. Direct investments of capital are still negligible despite the combined efforts of the OAU and Arab League to encourage direct investment by the oil-producer countries in other countries of the Arab-African region. The investments represent a substantial portfolio. But they are almost entirely the sole concern of the OPEC countries and are entirely placed on the financial markets of the North. The only South-South financial flow of any consequence is represented by aid from the oil-producer countries - principally the Arabs - to African partners. This flow accounts for 80% of South-South capital transfers and has already reached a level, for certain beneficiary countries, comparable in order of magnitude with the flow of traditional aid supplied by the OECD countries.

The South-South migration of unskilled workers or brain drain of skilled workers is also limited to the impact of the oil boom, while the old migratory flows, linked to the colonial division of labour, are exhausted.

What conclusions can be drawn from these facts?

The economic relations between the newly industrializing, and the other Third World countries resemble in some ways the North-South relations. In the nature of things, the former's exports have to be competitive and hence operate within the structure of the world capitalist system's prices. If there is unequal exchange in North-South relations the same thing will occur in South-South relations. But the same could be said of interventions by countries of the East on the world market. Despite the restructuring there is some advantage in the new developments, if only to the extent that the NlCs, unlike the Western countries, cannot fit their trade into global economic and political imperialist strategies. The emergence of this kind of exchange between NlCs and other Third World countries is, in any case, one of the favourite arguments of the proponents of the theory whereby the concepts of centre and periphery should be abandoned once and for all, as it has been proven that the Third World countries can develop within the framework of worldwide expansion and even compete successfully against the countries with the longest tradition of industrialization. Other Third World countries' failure to do so would reflect not the imperatives of the world system but unfavourable internal factors for which they are themselves to blame. The sharp differentiation within the Third World would provide evidence of the mistakes in the theory of international polarization implicit in capitalist expansion.

This takes us rather quickly to the conclusions we have already discussed above. The South-South link as it is, in fact extends the unequal Norh-South relations, without the beneficiaries of change among the countries of the Third World having real access to the closed club of the imperialist centres. There is an enormous amount of evidence in support of this conclusion. The surplus of the NlCs on exchange with the Third World compensates for the deficit on their trade with the North and allows a speeding-up of import of equipment by the NlCs. These imports carry a technological dependence behind which - as the debt experience has shown - stands a financial dependence that the NlCs cannot escape. The NlCs as exporters of technology to the rest of the Third World are intermediaries, unable to innovate but only to absorb. Beyond these purely economic considerations, the impact on the character of the state in the NlCs and the social effects of their development are pan of the worldwide expansion (these effects are, as we have seen, heightening and not reducing internal social inequalities). This impact strengthens rather than denies the thesis of polarization reproduced by world capitalist expansion. That is why I have suggested regarding the NlCs as the true periphery of tomorrow, and not as 'semi-peripheries' on the way to crystallization into new centres, while the rest of the Third World countries - especially the fourth world, in a more recent coinage - are the areas laid waste by this expansion.

There are variations and shades of meaning within this overall schema. Relocation is not necessarily and entirely 'controlled' by the monopolies of the centre, according to a simplistic schema of 'redeployment', as it would be if the multinationals' strategies could be operated without any hindrance. But the industrialization of the NlCs as it is, is closer to this form of relocation than to that foreseen by the NIEO. The latter aimed to establish autocentric industrialized national economies and to breathe new life into world trade. Within the framework of relocation without autocentric national and popular crystallization there are various strategies, each with its particular characteristics. Brazil is an example of relocation without progressive social transformations (so far at least, and it is the tragedy its young democracy is facing): Korea an example of relocation from a more socially balanced starting point: India an example of relocation grafted on to a strategy with some elements of de-linking (and hence led into a new contradiction between the path of further de-linking and that of relocation and incorporation into the worldwide expansion). In all three cases a strong and interventionist state gives the lie to the 'world Bank' language of liberalization.

We are brought back at this point to what we have been saying about de-linking, as the central axis of national and popular autocentric thrust. As long as we operate within the framework of the structure of world prices (and the South-South link has yet to escape), as long as the strategies internalize this structure (through the criteria of profitability in force), industrialization in our time can only be a relocation incapable of effacing the structural characteristics of peripheral capitalism (that is, an increasingly unequal internal social distribution, in contrast to that typifying the societies of central capitalism where the distribution is stable). To change direction it is essential to adopt alternative criteria of economic rationality, de-linked from those that operate in the worldwide framework. A South-South link that would support autocentric national and popular policies and give them more scope demands this de-linking. It is still a long way off.