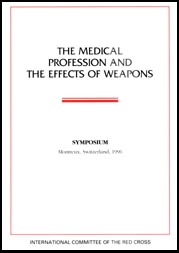 Mr Roethlisberger, Vice-President of the ICRC, welcomed the participants and explained how the Symposium was in keeping with the humanitarian tradition of the ICRC. He described how, from its beginnings on the battlefield at Solferino in 1859, the ICRC has expanded its efforts to prevent the suffering caused by war and weapons both through the development of international humanitarian law and through efforts to ban or restrict the use of certain weapons.

Mr. Roethlisberger explained that the current Symposium was the latest in a series organized by the ICRC on specific issues relating to health in war. In the previous seven years the ICRC had convened groups of experts on blinding laser weapons, anti-personnel landmines, famine, and water in war.

In closing, Mr Roethlisberger said he hoped that by bringing together experts in a number of related fields, the Symposium would help the ICRC to make progress in its work to prevent the suffering caused by weapons.

Dr Russbach said that, as in many humanitarian fields, the medical profession had a special role to play with respect to the effect of weapons on health. But, he pointed out, the knowledge gathered by physicians could be used not only to improve the treatment of victims but also to design even more devastating weapons and strategies. In such a situation, how could doctors ensure that their activities would reduce suffering?

Dr Russbach said that doctors enjoyed credibility because of their commitment to the Hippocratic oath, and warned that they should not squander that asset by playing politician. Nevertheless, he pointed out, doctors did have a legitimate role in advocating for controls on weapons, and the Symposium provided an opportunity to define this role and identify potential initiatives within the medical community.

Dr Russbach went on to explain how, from a legal standpoint, much had already been done to define criteria for the types of weapon that should be banned. The question now to be addressed, he said, was whether available medical knowledge could or should be used to give precision to legal criteria by attempting to quantify superfluous injury and unnecessary suffering. The topic was a new one, and the views expressed at the Symposium would lay the groundwork for further work in this area.

Dr Russbach also pointed out that the objectives of the Symposium were entirely in accordance with those of the Geneva Foundation.

Dr Coupland explained the proposed structure of the Symposium and explained that the presentations had been organized around the four key topics outlined below.

Epidemic. The effects of weapons constituted a global epidemic, Dr Coupland explained. What were the responsibilities of the medical profession in preventing such a public health disaster?

Effects of weapons on health. The impact of weapons was generally considered from a legal or military perspective, he explained. Could their effects on health be defined so as to provide a means of communication and a common denominator between the interests of all concerned with the design, use and effects of weapons?

Ethics. Dr Coupland drew attention to the dilemma arising from the fact that information gained from the study of wounds and wounded people could be used not only to improve medical care but also for the development of weapons. How should the medical community react?

Communication. Dr Coupland emphasized the importance of translating both epidemiological data and ethical baselines into law and of communicating the Symposium’s conclusions in a compelling manner to the relevant audiences.