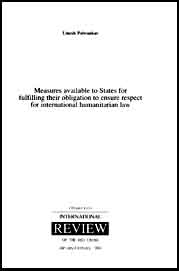 Coercive measures that States may take themselves

5 Yves Sandoz, “It would indeed be unthinkable to see international humanitarian law, whose philosophy it is not to link its application to jus ad bellum, itself become a pretext for armed intervention”. Annals of International Medical Law, No. 33, 1986, p. 47. See also the second and fourth preambular paragraphs in the Preamble to Protocol I additional to the Geneva Conventions. With regard to respect for human rights, “the use of force could not be the appropriate method to monitor or ensure such respect”. Judgment, Nicaragua v. United States of America, ICJ Reports, 1986, paragraph 268. For an overview, with extensive references, of the prohibition of the use of force in international law, see International Law Commission: Third report on State responsibility, Chapter X.A. “The Prohibition of the use of Force” (Doc. A/CN.4/440/Add. 1, 14 June 1991).

It would be useful at this stage to touch very briefly upon the legality, in international law, of the adoption of coercive (albeit unarmed) measures by States vis-is other States. Practice shows that States employ a wide range of such measures in order to exert pressure on other States in retaliation for an act committed by the State against which they are directed. Such measures may be classified in two broad categories, namely retortion and unarmed reprisals.

Retortion refers to acts which are unfriendly, and even damaging, but intrinsically lawful, carried out in response to a prior act which might also be unfriendly but lawful, or internationally unlawful.

Reprisals are acts which are by their very nature unlawful but are exceptionally justified in the light of a prior unlawful act committed by the State at which they are directed. Thus the International Law Commission, which uses the term “countermeasures” to designate such acts, considers the initial illegality to constitute a circumstance which precludes the illegality of the response.6

6 “The wrongfulness of an act of a State not in conformity with an obligation of that State towards another State is precluded if the act constitutes a measure legitimate under international law against that other State, in consequence of an internationally wrongful act of that other State” (ILC Draft Article 30 on State responsibility), Yearbook of the International Law Commission, 1979, vol. II, p. 115. For termination or suspension of the operation of a treaty as a consequence of its breach, see Article 60, paragraphs 1-4 of the Vienna Convention on the Law of Treaties. Also, Arbitral award in the case concerning the Air Service Agreement of 27 March 1946 between the United States of America and France, Decision of 9 December 1978, paragraph 81: “If a situation arises which, in one State’s view, results in the violation of an international obligation by another State, the first State is entitled, within the limits set by the general rules of international law pertaining to the use of armed force, to affirm its rights through counter measures”. Report of Arbitral Awards, Vol. XVIII, p. 417. For an exhaustive study see Frits Kalshoven, Belligerent Reprisals, Sijthoff, Leyden and Henry Dunant Institute, Geneva, 1971, 389pp.

The lawfulness of the measures themselves,7 notably with regard to their content and implementation, is determined not only in terms of the limits dictated by the demands of civilization and humanity, but also in terms of their aim. The aim is neither to punish (we are concerned with countermeasures. not sanctions) nor to seek compensation, but solely to oblige the State which is responsible for violating the law to stop doing so, by inflicting damage upon it, and to deter it from repeating the same offence in the future. Thus, in order to remain lawful, the coercive measures must:

7 This refers chiefly to reprisals. For jurisprudence dealing with the lawfulness of reprisals, refer to the “Naulilaa” and “Lysne” cases, Arbitral awards of 31 July 1928 and 30 June 1930 respectively, Report of Arbitral Awards, Vol. II, p. 1025 and p. 1056. Nevertheless, the considerations which follow also apply, by analogy, to measures of retortion which, although intrinsically lawful, should not however stray beyond the bounds of lawfulness. They must for instance respect the principle of proportionality in relation to the objective pursued. They may not be used for purposes other than to put a stop to the unlawful act which prompted them. However, neither practice nor case law provide any clear indications of the bounds of lawfulness of retortion. For details on lawfulness and related considerations with regard to retortion and countermeasures, see International Law Commission: Third report on State responsibility, Chapter I.B. “Retortion” (Doc. A/CN.4/440, 10 June 1991), and Fourth report on State responsibility, Chapter V. “Prohibited countermeasures” (Doc. A/CN.4/444/Add. 1, 25 May 1992).

- be directed against the State responsible for the unlawful act itself;

- be preceded by a warning to the State in question, asking it to stop the said act or acts;

- be proportional; all measures out of proportion with the act which prompted them would be excessive, and hence unlawful;

- be temporary and therefore cease as soon as the violation of the law by the State in question ceases.9

8 In conformity, inter alia, with Article 60, paragraph 5, of the Vienna Convention on the Law of Treaties. Furthermore, paragraph 4 of the same Article makes reservation for the specific provisions of each treaty applicable in the event of a breach. Under international humanitarian law, prohibitions of certain measures against protected persons are to be found in Articles 46, 47, 13(3) and 33(3) of the Four Geneva Conventions respectively and certain articles of Additional Protocol I, such as, for example, Articles 20, 51(6), 54(4). See also International Law Commission, Fourth report on State responsibility, Chapter V.C. “Countermeasures and respect for human rights” (A/CN.4/444/Add. 1, 25 May 1992) wherein the rapporteur observes that “... humanitarian limitations to the right of unilateral reaction to internationally wrongful acts have acquired in our time... a degree of restrictive impact which is second only to the condemnation of the use of force” (paragraph 78). Among the examples he cites to support his observation, one finds the total blockade of trade relations with Libya declared in 1986 by the United States, which prohibited the export to Libya of any goods, technology or service from the United States with the exception of publications and donations of articles intended to relieve human suffering, such as food, clothing, medicine and medical supplies strictly intended for medical purposes (paragraph 79).

9 This condition ought equally to be read in the light of General Assembly resolution 2131 (XX) of 21 December 1965 on the Inadmissibility of Intervention in the Domestic Affairs of States and the Protection of their Independence and Sovereignty, and resolution 2625 (XXV) of 24 October 1970 on the Declaration on Principles of International Law Concerning Friendly Relations Among States in Accordance with the Charter of the United Nations, both of which clearly condemn the use of economic and political force by States to coerce another State in order to obtain from it the subordination of the exercise of its sovereign rights or to secure from it advantages of any kind.