UNV could also consider downstream linkages to highly localised initiatives of preventive "diplomacy", mediation or conflict pre-emption. Another area relates to demobilisation of the military/militia, and the issues that emerge in the relationship between the military and civil society in developing countries undergoing democratisation and structural adjustment.

As the military disengage from government and hand over to civilian administration or fragment factionally under societal collapse, a challenge is posed, more especially if the forces of micro-nationalism appear on the scene. If and when peace can be restored, how can the military return to barracks, and at the same time be given a constructive role to play in the nation's welfare? How can it be seen to play a positive and productive role, beyond the domain of national security, but sufficient in scope and responsibility to obviate the temptation to usurp civil government? And in the context of demobilisation, how can discharged military personnel be re-integrated meaningfully into civilian life, rather than becoming a destabilising force? These are the challenges UNV specialists are facing in new programmes in this context, underway or beginning in Liberia, Mozambique, Rwanda, Eritrea and Somalia.

To respond effectively requires a new dialogue between governments, military leaders and relief and development agencies, Innovative programmes can be considered to take advantage of the highly organised and disciplined ranks of military manpower to implement infrastructural projects. Donors and military could combine to carry out programmes to repair deteriorating urban infrastructure, renew services, and to extend them to the urban poor (low-cost housing, roads, water and sanitation services, garbage collection, etc.). Army engineering and health personnel could similarly fill gaps being felt as a result of cutbacks on sectoral ministries. A transition phase could witness the military budget compensating for structural adjustment austerity on sectoral programmes, until a gradual re-equilibrium could be restored through the shift of resources from defence spending to socio-economic sectors,

Military personnel may represent an organised work-force, and the potential to capitalise on inculcated discipline (if it remains) for carrying out reconstruction or environmental programmes can be a major advantage. The military usually also contain a range of skills and training (medical, engineering, logistical, catering, etc.) which can be relatively easily converted into civilian use. On the other hand, failure to deal satisfactorily with the conversion of demobilised troops will not only accentuate unemployment, but also shift the burden of family income-generating responsibility increasingly to women. In the short-term it is likely to contribute to family breakdown, female-headed single-parent households, and various social problems.

Since the military are most often barracked in urban areas, the brunt of demobilisation may fall unevenly on already over-stretched urban infrastructure and services, even if, as is often the case in LDCs, the soldiers have been recruited from rural areas (and may contain a large percentage of women, as in Ethiopia, or children, as in Liberia). If they have rural backgrounds, there may be obvious advantages for post-encampment facilitation of their return to rural areas, with e.g. farming start-up packages in lieu of weapons under a disarmament trade-off. Only in more advanced economies could one envisage making use of such labour reserves in urban areas for industrialisation strategies.

It is worthwhile to note the success of food-for-work programmes in Eritrea, since the end of the war, in contributing to the overall rehabilitation of the country. Presently there are two major programmes being implemented which UNDP along with other agencies has been supporting. The first is a programme which employs several thousand demobilised soldiers on infrastructural projects, concentrating-on road and bridge building. The second is a national tree planting programme which also involves ex-fighters, to help combat the serious environmental problems Eritrea has in this area.

UNVs have also been involved in labour-intensive public works programmes, in small-scale enterprise development at community-level; and in community-based participatory environmental programmes that could be pulled together to dovetail with relief/rehabilitation programmes involving those demobilised. Given these and related concerns, UNV has assisting with the demobilisation of military personnel through camp management and other services such as vocational training, under ONUMOZ in Mozambique, and UNOMIL in Liberia. 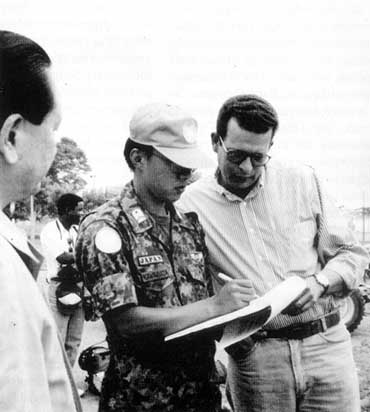