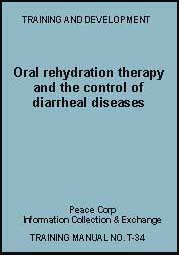 An estimated 500 million children in the developing world suffer from diarrhea three or four times a year. These frequent bouts of diarrhea aggravate malnourishment, increase health care costs, undermine the mental as well as physical development of the children affected, and place a greater burden on the parents and siblings who care for them. One out of every twenty children born into the developing world dies before reaching the age of five from dehydration resulting from diarrhea. The majority of these 5 million dehydration deaths could be prevented by the use of oral rehydration therapy (ORT), a relatively inexpensive solution that can be given in the home.

During the International Conference on Oral Rehydration Therapy (ICORT) in June 1983, top government officials and heads of mayor international health organizations made commitments to increase public access to oral rehydration therapy. One outcome of this meeting was an agreement between the United States Agency for International Development and the United States Peace Corps Washington Headquarters to Involve Peace Corps Volunteers in the promotion and Implementation of Oral Rehydration Therapy worldwide.

The Oral Rehydration Therapy Initiative, a collaborative effort between Peace Corps and AID aims to reduce child morbidity and mortality from diarrhea by promoting ORT at the village level.

The ORT Training Manual was developed to support this initiative with a generic training model designed to be adapted to country specific conditions and needs. The manual is intended for use in inservice training of Peace Corps Volunteers and their Counterparts, and can be adapted for preservice Peace Corps training, to develop the basic knowledge and skills in the broad areas of:

• Prevention and control of diarrheal diseases (CDD) in the context of primary health care activities.

• Use of oral rehydration therapy (ORT) on a widespread basis in rural communities.

• Identification and referral of dehydration cases.

• Improvement of child nutrition through promotion of breastfeeding and nutritional foods during and after diarrhea.

If Volunteers and Counterparts will be working heavily in dehydration assessment and treatment, the training curriculum should be adapted to provide participants with more opportunities to practice skills in the community and local clinic under the supervision of qualified health workers. Sessions 5, 6, and 7 can easily be expanded to include additional hours for observation and hands-on practice with actual cases of dehydration.

Drafts of different parts of this training design were pretested in the Philippines, Nepal, Senegal, Gabon and Mauritania and the outcomes incorporated into this final draft. Guidance with regard to the technical content of the manual was provided by the Office of Health, United States Agency for International Development, the Centers for Disease Control and the World Health Organization.