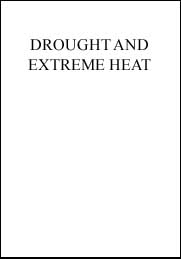 A Drought is an extended period of unusually dry weather. Droughts become severe if several months pass without significant precipitation.

Extreme heat is defined as temperatures that are 10 or more degrees above the average high temperature, and that last for several weeks during the hottest time of the year.

Drought and extreme heat can cause shortages of water and food crops. Parched lands are more susceptible to wildfires during periods of drought.

Droughts can actually result in later flooding; the vegetation dies without water, and as a result, even an average rain can cause flooding.

Droughts and extreme heat are possible anywhere in the U. S. The possibility for long-term droughts is much greater in the western States- excluding the Pacific Northwest.