Shelter and services for refugees and displacees

The turmoil of conflict deprives whole populations of their homes, their livelihood, and their dear ones. The devastation that results is not only physical but deeply psychological and social as well. A first step to the road to recovery is refuge and respite from ongoing trauma and destitution. New refugees fleeing their country en masse, and internally-displaced persons, need immediate survival support, as well as help to re-build their shattered lives.

In Tanzania, Jacques Paquette (Canada) recently spent several months as a UNV Field Officer with the UNHCR Burundi refugee programme in Ngara. His primary task was to encourage and support the overall coordination with local authorities and other relief partners involved in the UNHCR Refugee programme. He was also deeply involved in the continuous preparation work for the reception of new arrivals., in setting up registration programmes, monitoring relief administration/distribution activities and control of ration cards. Keeping relations with the local authorities on an even keel formed part of his everyday work, along with maintaining professional rapport with other agencies present in Tanzania and with both the international and local NGO community. In Liberia, Paul Davis, a UNV specialist from Sierra Leone, has been working as a UNHCR Field Officer. The operational area for which he has been responsible lies on the border between Sierra Leone and Liberia. As both countries are dramatically affected by the war, working conditions are particularly volatile. While trying to bring malnutrition health hazards and other related problems under control, with renewed fighting along the border in Sierra Leone thousands more refugees kept pouring into Liberia and reception facilities had to be set up to cater for this influx. In November and December 1993 alone, an estimated 8,000 new arrivals poured into this particular border region.

Paul Davis assessed the need for clinics, wells, sanitation, seeds and tools and made recommendations to the implementing partners concerned. He supervises the distribution of food and non-food relief items, ensuring that they reach the targeted beneficiaries. Monitoring the registration of refugees and the issuance of ID cards also fell within his working brief. Because the he is very familiar with the culture of the refugees concerned, he has been instrumental on several occasions in defusing conflicts between the authorities, the displaced and refugee communities.

UNV humanitarian relief assignments with UNHCR are usually field-based, with UNVs often acting as the operational link between refugee populations and UNHCR administration in the country concerned. Such UNVs assist with refugee reception, establishment of transit or settlement camps, camp administration and infrastructure. Direct contact with refugees is usually required for case assessment and determination of protection issues. UN Volunteers have now been recruited to assist UNHCR in many countries, for example in Burundi and Tanzania, in receiving Rwandan refugees. 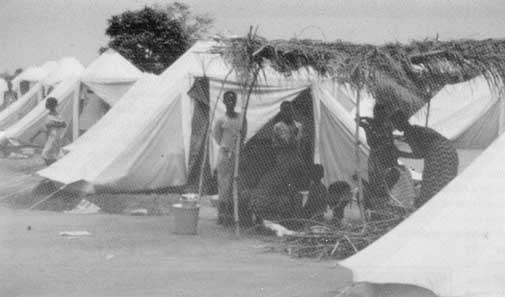 UNVs also work in related technical support to backstop UNHCR field operations. Mohammad Atique Zaman from Bangladesh recently worked as a UNV mechanic on UNHCR's vehicle fleets to ensure the successful delivery of vital emergency relief supplies to displaced populations who had migrated to towns along the Kenya/Somalia border. Essentially, his work concentrated on four main areas: mechanics; management of the spare parts depot; training of local staff, and overseeing the overall running of the vehicle fleets.

Due to the continuing civil war and recent drought in Somalia, many different Somali clans became refugees in Northern Kenya. In response to the crisis, UNHCR in 1992/1993 set up reception centres and camps in towns on both sides of the border such as El Wak, Mandera and Liboi. Rapid availability of spare parts was an area which the UNV specialist identified as an immediate problem and he therefore set up several spare parts depots. Furthermore, he passed on his mechanical skills to twenty local staff. In Liberia, a UNV specialist from Japan, Keiichi Hara, and one from Ireland, James Shelly, serve as mechanics in support of the UNOMIL operation. Over the past few years, mechanics have also played key roles in the mobilisation and maintenance of convoys in the former Yugoslavia, bringing life-saving supplies to victims on both sides to the conflict.