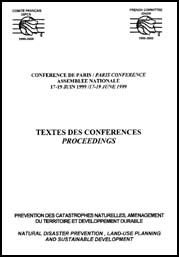 In 1998, Hurricane Mitch devastated four Central American countries, two of which are among the poorest in the world. Nine thousand two hundred persons died as a direct result of the hurricane and millions affected. Nearly eight million Euros were pledged by the European Commission, some of which still remains to be spent. The main channel for international aid was through non-governmental agencies.

This hurricane was not an isolated or an rare event. Natural disasters, due to ecological degradation, rampant urbanisation, population densities, are occurring more frequently and with greater impact. Cyclones, earthquakes, floods seem to occur with devastating regularity and claim more lives and set development back a few years. Certain regions are at higher risk due to geographic and environmental conditions but even taking into consideration those risks, increasing numbers of persons are affected by every successive decade from natural disasters. Tables 1 and 2 display the regional distribution and trends in numbers of disasters and the people affected over time drawn from the statistics maintained by the Centre for Research on Epidemiology of Disasters (Universitatholique de Louvain) in Brussels.

As Table 2 below shows, despite increased flood awareness and cyclone warning measures, the last 10 years has seen >300% increase in the numbers of individuals affected by floods and high winds. Increases - population densities are forcing more and more individuals to live in relatively high-risk areas such as river deltas and constitute one of the major reasons for this. In contrast, droughts and famines have declined by >80% in this time - perhaps reflecting the effectiveness of agricultural and large scale water programmes in Africa.

Table 2:
Annual average number of people reported affected by type of disaster and by period in thousands (1973 to 1997)

Since 1990, humanitarian aid funding increased four fold in one year jumping from 114 million ECU in 1990 to a budgeted 700 million ecus in 19982. Total levels of humanitarian funding stayed between 2-4 billion US dollars per year until 1997. In 1993, nearly 20 percent of EU aid to developing countries was for disaster aid. It is important to point out here that these funds were rarely additions to the total overseas aid normally budgeted by the donor countries but rather an increasing share of the total. For example, the share of humanitarian aid of countries such as USA and Sweden was 22.7 and 14.5 percent of total Overseas Development Aid (ODA) in 1995. Understandably, development aid proponents were discouraged at this shift in balance especially since 1995 was also the year when total ODA dropped to its lowest since 1980 as percent of Central Govt expenditure (highest was in 1992 - 2.08). Furthermore, much of the spending was exclusively for relief and short-term rehabilitation with little or no concern for risk reduction or mitigation for the future. This sudden explosion in the available funds for disaster response had one immediate result: a major increase in the number and size of NGOs concerned with disaster relief. Special consortiums were set up to represent their interests such as VOICE in Brussels. More than 65 percent of ECHO'S budget was spent through NGOs compared to UN agencies, National Red Cross Societies, IFRC and CICR.

2 The Reality of Aid, An Independent review of Development Co-operation, EUROSTEP/ICVA, Earthscan, London, 1997

The typology of NGOs varies significantly on several variables. Disaster NGOs are of all sizes. They range from multinational, corporate type structures such as CARE International or MSF International with several thousand employees and with branch offices in Tokyo, New York and Sydney to NGOs of 5 - 10 persons operating a food collection initiative or collecting money to buy one apparatus for one camp. They also range from secular to those professing a single religious aim and directing aid to the faithful. Budgets can also vary between a few thousand Euros to ones larger than the World Health Organisation. Certain countries channel more than a third of their aid through NGOs, who reflect therefore more explicitly the national policies. In others, the NGOs are less dependent of public funds and raise most of their resources from private, individual donors.

At the start of this proliferation there was little question raised on substantive technical or policy competences of the organisations. The disaster funds had to be spent and the implementing agencies were there to spend it. The situation was considered satisfactory from both points of view. Also humanitarian relief to victims of disasters was largely perceived to be a charitable enterprise and professionalism did not enter into the debate. Even less did enquiry into causes for such devastation or possible means to prevent or reduce the effects take place.

As funding increased and media coverage got better, more and more numerous NGOs arrived on the disaster scene. For example in the cyclone of Bangladesh in 1991, a record number of 60 new NGOs arrived every week for about 6 weeks. In Albania, today there are over 280 NGOs in Tirana. Hotels and rental car companies did booming business. The implications of this flow of NGOs attendant were several. Six major ones are described here as those which have the greatest impact on disaster management on the ground.

First, a frequent lack of coordinating authority among the in-coming NGOs, whether national or international, meant that some areas got excess attention while others none at all. Being largely dependent on voluntary funding, NGOs tend to operate in areas where funding is easily available and visibility was high. Inappropriate aid supplies (e.g. non-vegetarian foods, blankets and plastic tents in high heat conditions, inappropriate medicaments) and a rush of volunteers with more good will than skill can create more problems than resolve them. Several occassions often ended in local personnel having to sort supplies or deal with secondary gastro-enteritis outbreaks amongst volunteers unused to temperature or conditions.

Second, the huge proliferation of humanitarian agencies since early this decade not only aggravated already existing problems of co-ordination in the field but also lowered the quality of work and technical standards. For example, disease outbreak alerts were issued by NGOs in El Salvador and Honduras, which were baseless but nonetheless raised significant funds for response. Repeated campaigns of vaccination on the same population are a frequent occurrence when waves of NGOs arrive in a chaotic area.

Third, implications of furnishing large amounts of aid locally in politically unstable and corrupt conditions without co-ordination or control have perverse results that penalise the victims even further. For example, following the earthquake in India in 1994, renting families whose homes were destroyed received construction materials to reconstruct their homes. After the families employed labour or worked themselves to rebuild their homes, the landlords raised the rents or evicted them.

Fourth, there are increasing demands for greater professionalism and accountability among the NGOs, partly due to the greater and greater amounts of funds channelled through them.

pushing for reform in the disaster policies among donor organisations to give higher priority and emphasis to prevention and development linked activities rather than post -disaster relief. NGOs are a perfect manifestation of free societies and expression of civil liberties. Their strength is their independence and ability to take up challenges that their governments or other organs of civil society cannot. In natural disaster management, one can expect the NGOs to bring about change from a relief dominated approach to disasters to a development dominated one.