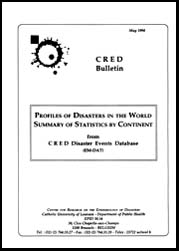 Within the last two decade, disasters in the world have increased both in frequency and in their impact on human settlements. Since 1960, 8111 disasters of natural origins have occurred in the world which have required assistance. Nearly 4 million have been killed as a direct result of these events and about 10 times more have been severely affected.

Better communications and closer global ties have certainly played part in this increase. But rampant urbanisation, significant environmental changes and expanding population growth have made disasters much more destructive. Recent incidents in USA (flood in 1993), India (earthquake in 1993) and Nepal (flood in 1993) bear witness to this fact.

Valid and systematic information on risk of disasters, and their human impact has not been available for planning emergency relief and preparedness within development programmes. Moreover, the quality of data was questionable as was its comparability. More often than not, information was available infragmentary bits from different sources. This lack of a fundamental management tool has been to the obvious detriment of effective relief and mitigation, both at international and national levels. To address this need, the Center for Research on the Epidemiology of Disasters initiated an effort to compile, standardise, validate all disasters requiring assistance or causing 10 dead or 100 affected, with the encouragement and support of the following organizations: Belgium Government (AGCD), International Federation of the Red Cross and Red Crescent (IFRC), DHA/United Nations, World Health Organization (WHO), World Meteorological Organization (WMO).

The database in CRED compiles its records from various sources on a daily basis which it verifies and compares with other information, searches for complementary data and enters into the database. The largest single contribution is made by Food and Humanitarian Agency (Ex-Office of Foreign Disaster Assistance) United States State Department (33 %). The next largest source are major insurance companies (18%) such the Royale Belge, Swiss-Re and Munich-Re. Archival research and situation reports of the DHA/UN provide 16 % of the records. Some governments send, on a regular basis, a listing of their disasters indicating a centralised system of registration at the country level. While in most developing countries there is a central agency (e.g. Civil Defense, Planning Commissions) which co-ordinates emergency action, this is not so in European countries. In most industrialised countries (with the exception of Japan, Australia and New Zealand) basic data are scattered between public agencies according to disaster type and a common source for data rarely exists.

The data presented in this bulletin include both man-made and natural disasters. The main point to be made here regards the difficulties in classifying a man-made event as a disaster. For example, the human impact of a technological accident is very difficult to estimate accurately for a quantitative database. Another example of the difficulties with man-made disasters is the distinction between civil conflict and displaced persons which are frequently inter-related; In addition, quantitative data on these man-made events are very difficult to obtain with any accuracy.

Natural disasters, which form the bulk of our database, are presented in the following categories:

Further details on the definitions and components of other categories (such as man-made disasters) is available in the brochure on EM-DAT database.

This bulletin presents a brief overview of disaster in the world. For each regions, average number of persons killed or affected per disaster is calculated for each type of disaster. This indicates for example, the relative magnitude of human impact of earthquakes compared to floods in a given region.

Standard methodologies for estimating economic damage from disasters remains an area where much research is still needed. Governments, insurance companies, or other agencies involved in relief generally estimate economic damage according to varying criteria and standards. This presents serious difficulties, not only in comparisons across countries but also over time.

The data presented here is based on reported economic losses provided to CRED by the USAID - OFDA (41%), insurance companies (33%), DHA - UNDRO (14%) and Government (6%). There are evidently biases in the data, however they do serve as an indicator of the general trend and magnitude of the problem. Despite our multiple sources that have generated over 9000 events for the database, only 24% have information on economic losses. The averages have therefore been calculated on the basis of only those events that have any losses reported. Due to the excessively wide range of data for variables on death, affected and estimated damage, the graphs are displayed on a logarithmic scale. In-depth research on this data along with supplementary information is underway and analytical comments will be published in a future issues of this bulletin.

The time period of the EMDAT database covers data from 1900 until the present. However, the reliability and coverage of the data increases substantially from 1960 onwards. This is largely due to the establishment of the Office of Foreign Disaster Assistance (1964) in the US and UNDRO (1972) in Geneva, both of which had the management foresight to collect data on a systematic basis. There is a short time lag of a few months before a record at CRED is closed since primary sources (governments, international agencies, insurance companies) rarely finalise disaster statistics until the end of their working year. CRED compiles final statistics on the EMDAT system, from all sources only around the middle of the following year. As this report goes to the press, 1993 has therefore only provisional figures.

The data presented here are basic, essential information that could interest national and international programme managers and researchers. Evidently, for specific purposes, more data and information will be required for which CRED can compile special analytical case studies. We hope that digested and simplified information such as these, despite its caveats mentioned, will be useful for sensitising policy makers and programme managers in furthering the preparedness activities. Furthermore, we also hope that they will bring to attention the need for better reporting and more accurate data in the future to improve relief and preparedness efforts.

Detailed information may be obtained from the CRED (C. Misson, Database Coordinator).