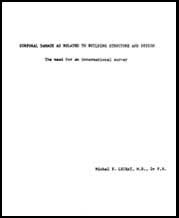 For the purpose of preparedness and management, disasters in general, including earthquakes, may be considered as a time-sequence in five phases:

The anticipatory phase is the time for planning and for such preparedness activities as hazard mapping, preventive technology, disaster training and public education. The pre-disaster phase commences when there are indications of an impending disaster and a prediction based on a probability judgment can be made. It involves the activation of preset warning systems identified during the non-disaster phase which are appropriate for key groups in disaster response and for the general public. The impact phase involves a major disruption of the local community. Though it is characterised by initial chaos, it often includes a remarkable degree of self organisation whose effectiveness can be increased by suitable programmes during the anticipatory phase. The relief phase begins when assistance arrives from outside the disaster area. The effectiveness of such aid may be increased by preparedness and planning. In the rehabilitation phase, short-term relief is progressively replaced by more specific assistance based on an assessment of local conditions. It ends with the restoration of, or an improvement on the conditions prevailing before the disaster. This framework is common to all natural disasters, and to some extent can also be applied to man-made disasters. Intervention can thus be envisaged at various points of entry in the system.

In recent years, the emphasis in disaster management has definitely shifted from post-facto improvisation to pre-disaster planning and preparedness, including prevention and prediction whenever possible. Floods for example are amenable to prevention by appropriate land use, soil conservation, construction of dykes. While hurricanes, typhoons and other strong wind phenomena cannot at the moment be prevented, prediction is possible. Provided the technology is applied and the population is educated to response to warning signals, evacuation or other preparedness measures can be implemented.

It may however happen, and it often happens, that even when the technology for prevention and/or prediction is available, it cannot be applied. Cost and social factors have to be taken into account. It might be too expensive to build dykes against tsunamis. There are also very good reasons for people living in flood-prone areas or on the slopes of volcanoes. Some countries can support a large population because they have floods which irrigate the lands; in countries with an accelerating population growth volcanic soil is good for agriculture, and anyway people may have no other places to go. Then, often, rescue and relief, that is response once the disaster has occurred, is still essential to save what remains to be saved.

Regarding earthquakes, prediction cannot be operational at present. Earthquakes prone areas are well mapped, but neither the time of occurrence nor the exact place can be predicted with sufficient accuracy. Long-term prediction is neither sensitive nor specific. Would less unreliable prediction become possible, it would raise excruciating dilemmas for the decision maker, apart of the perspective of horrendous lawsuits in case of false positive or false negative warnings. Major earthquakes may also occur in low-risk areas where for centuries no disaster has occurred, the more damageable so that the population is not prepared for it. The Eastern United States (Charleston, South Carolina, 1886) is such an area. Short-term prediction is the subject of much talk. Some success has been claimed in China. It is however doubtful that a prediction with a lag time of a few minutes can reach the population in time to prompt effective escaping behaviors, especially in high buildings and in large cities. It also requires an efficient system of communication. Not every country, especially in rural areas, can afford warning system based on computers linked to the national telephone network, like Iceland, or radios and televisions systems delivering emergency messages even when the units are turned off, like Japan.

It means that with respect to earthquakes, we are left with two points of entry into the system, i.e. mitigation of effects, through anti-seismic buildings, and efficient rescue after the impact, that is response and rescue.