In 1996, the European Commission Humanitarian Office (ECHO) launched a regional approach initiative for natural disaster preparedness and prevention; this initiative focused initially on Central America, the Caribbean, SE Asia and Bangladesh. The first phase of this programme involved a diagnostic studies which constituted the basis for reflection and decision-making prior to the ECHO action plans as part of the Disaster Preparedness ECHO (DIPECHO)

As regards SE Asia, and Bangladesh, the diagnosis in the strict sense of the word was carried out by CRED-UCL in collaboration with Luc VROLIJKS, a CRED consultant (Cred/Vrolijks, 1997). The present study is aimed at supplementing this work and lays special emphasis on the consequences of natural disasters in the region, the damage-generating phenomena, the different criteria and levels of vulnerabilities and the risks incurred at regional and national scales. The study also aims at giving, in the same perspective, a graphical and cartographical base useful in the communication and decision-making.

The study entrusted to CIFEG (International Centre for Training and Exchanges in the Geosciences) by CRED-UCL and ECHO was carried out jointly by Robert D'ERCOLE and Patrick PIGEON from the department of Geography of Universite Savoie, Chamb, France. The study is based on a consistent documentation: scientific work, studies and reports collected by CRED-UCL, the United Nations offices in Geneva, the University of Savoie and that of Lausanne, Switzerland. The CRED-UCL Emergency Events Database (EM-DAT) is, too, a key part of the study.

General characteristics of the region under study

The region under study consists of 7 countries: Bangladesh, Myanmar, Thailand, Laos, Cambodia, Vietnam and the Philippines (Fig. 1). These countries have an estimated population of 385 million inhabitants on a surface area of 2,382,000 km2, giving a population density of 162 inhabitants per square kilometre. Between 1960 and 1994, with the exception of Cambodia, all the countries showed high population growth rates (greater than 2% per year). The group of countries considered are far from being homogeneous and a number of differences have been observed especially in terms of surface area, population sizes and densities (Fig. 2). Despite its relatively small size (144,000 km2), Bangladesh has one of the highest population sizes estimated to be about 30% of the sample area and therefore has a very high population density (836 inhab./km2). On the contrary, countries like Cambodia and Laos have relatively low population sizes and low to very low population densities (21 inhab./km2 for Laos). 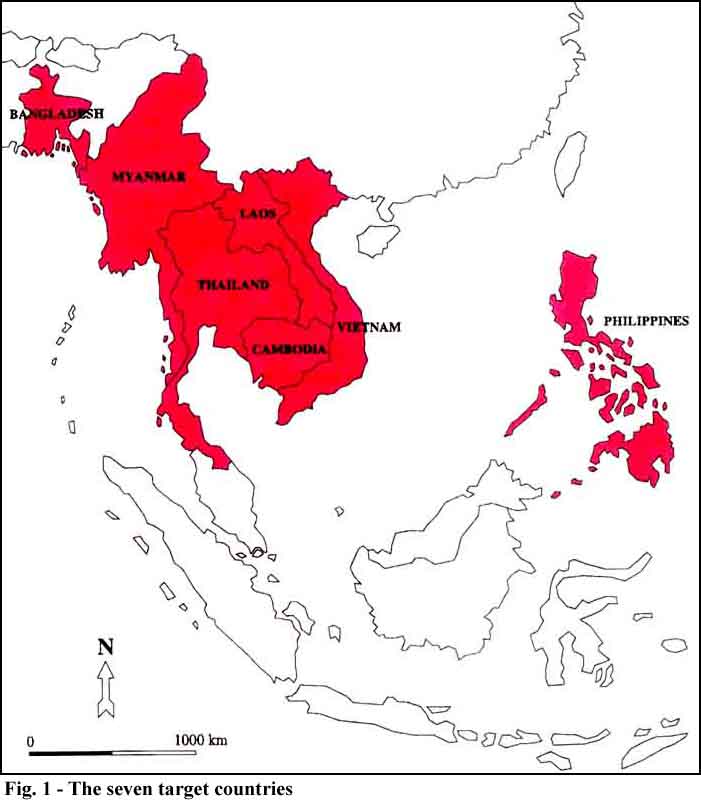 This study consists of four parts.

The first part is an analysis of the consequences of natural disasters in South East Asia and Bangladesh that allows the drawing up of an overall assessment in terms of events, effects on humans and on the economies of the societies concerned.

The second part defines types of hazards and particularly in regard to their nature, frequency and spatial distribution. The analysis is based on a comparison between the potentialities and the phenomena that have occurred. A typological classification of the countries according to their degree of exposure to hazards is finally presented.

The fourth part considers that the global approach to risks is insufficient since the diversities in each country are not taken into account. Therefore with a perspective of actions adapted to prevention and preparedness and considering the different physical and human characteristics, a synoptic assessment of the risks was effected on a national scale in order to identify different territories prone to risks.