The indicator of human development (IHD) is the most synthetic of these indicators. It has been established for each country and gathers together the mean wealth per capita (real adjusted GDP per capita), health (life expectancy), and education (adult literacy). In figure 30, other than the IHD, three indicators that make up this index have been projected. The assumption is that the lower the IDH, the lower the mean wealth, the literacy and the average health state of the population will be while the vulnerability to physical hazards increases. Poverty is, as a matter of fact, one of the major vulnerability criteria. This has been evoked by the studies carried out by different authors of which one of them is NAZRUL ISLAM (1996, p. 381): "normally, the houses of the poors are the worst affected since they are built of weak materials and located on marginal and hazardous sites".

Despite the difficulties involved in evaluating poverty, which "shows a multiplicity of forms/expressions and goes beyond income insufficiency" (PNUD, 1977, foreword) and the limitations of the methods used, UNDP data reveal a contrasted national development of the GDP per capita between 1960 and 1994 measured in 1987 US dollars (PNUD, 1997, p. 178-180). Ambiguity is particularly evident for countries like Thailand or Vietnam since the increase in average income seems to have been accompanied by the development of a very low income-earning population. In their report, NGUYEN QUANG VINH & LEAF (1996) assert that: "the cities of Vietnam have been undergoing a tremendous change since the introduction of the doi moi policies in the late 1980's. One significant outcome has been the growth of informal popular housing settlements." For example between December 1992 and January 1994, the number of residents in the district of Xom Ma (Ho Chi Minh city) increased by 15%. The marginal districts of the former Saigon, that have shown similar demographic developments to those at Xo Ma are quite often subject to floods. High poverty areas therefore are the suburbs of capital cities, which nevertheless does not exclude distant rural areas. Estimates as to the latter areas are rare mainly because of the disinterestedness of the major ethnic groups in the territories occupied by culturally-different populations. Characteristically, the regions where the poors - which cannot dispose of at least 2100 calories a day - stand out for more than half of the total population, are mountainous areas where Viets are by far in a minority (DRAKAKIS-SMITH & DIXON, 1997, p. 30-31).

In other respects, poverty is associated with illiteracy and fatalistic mentalities as concerns risks, thus hindering prevention policies. Poverty has also an effect on housing which constitute a usually high damage percentage in case of disaster. The fact that it principally concerns precarious houses with low individual value, reveals even more the real significance of hazards. HODGSON (1995) underlines that mainly poor people lived in the 790,000 houses destroyed by the 1991 cyclone which devastated Bangladesh: "many of the victims worst affected were people living precariously on poor land, by river banks or on coastal flats".

These indicators as well as the birth and infant mortality rates, put on the same lines as the preceding ones, make it possible to establish a hierarchical organisation of the countries. Cambodia and Bangladesh are at the bottom of the scale while Thailand is the least hindered country. The other countries take up intermediary positions, the less favourable being those of Laos and Myanmar.

Like population growth, population density is a simple indicator of the vulnerability differential even though it is subject to major criticism such as inaccuracy of the statistical results using population data or the fact that these densities are but rough averages that may conceal the real contrasts of population effective distribution. Some of the maps showing a distribution nearest to the reality (Figures 31, and 32 for Vietnam and Laos) try to correct this imperfection. The principle retained is the following: the countries, particularly those with the most unfavourable socio-economic parameters, which have high to very high population densities (>200) are assumed to have higher vulnerabilities. The same is true for the annual growth data for the period 1960-1994. This can, in the same logic, be supplemented by the urban population growth. The urbanization growth rates are generally low (except in the Philippines where this rate is approximately 54%) but the urban growth rates are quite high (from 3 to more than 6 per year).

According to these criteria, Bangladesh is by far the most vulnerable country (with -an exceptionally high density for a country with a surface area of 140,000 km2, a high rate population growth and a very high urban growth). Bangladesh is followed by the Philippines which shows high values for each of these criteria. According to the indicators, the other countries show a globally lower vulnerability despite their disparities notably as for density.

- Bangladesh is the most vulnerable country all the indicators being unfavourable.

- It is followed by Cambodia that is mainly penalised by socio-economic factors.

- Laos and Myanmar are vulnerable because of the socio-economic variables though to a lesser degree than those above.

- Vietnam and the Philippines seem to be slightly less vulnerable than Laos and Myanmar. The former vulnerability lies mainly in its weak socio-economic indicators, the latter's in its demographic criteria.

- The majority of the indicators for Thailand are distinctly more favourable than those of the other countries. It is therefore the least vulnerable country.

By crossing data concerning vulnerability and those concerning natural hazards, it has been possible to define global risk levels. This was done by taking into account the relative variety and intensity of natural hazards, the frequency of disaster, and the socio-economic and demographic criteria of vulnerability. According to their status regarding the different criteria, a value was attributed to each country in order to bring out the risk levels. If, as concerns methodology, this approach is not faultless, any change in a certain number of criteria would not lead to any intrinsic change in the final result. Figure 33 illustrates the conclusions obtained showing three groups of countries, in decreasing order.

- The maximal risk level is reached by Bangladesh and the Philippines. The situation in these two countries is however distinctly different. In the Philippines, the risks are a result of all types of hazards (though cyclones and floods have a dominating frequency), of their high intensity, past or potential, and of a relatively high vulnerability. On the other hand, the destructive phenomena are less varied in Bangladesh (essentially of hydro-meteorological origin) and their frequency slightly low, however the vulnerability is very high. This, to a great extent, explains the greater number of deaths and affected people in this country in the last decades despite the relatively lower number of events registered.

- Myanmar, Vietnam, Laos and Cambodia all have a high risk level but this value is quite lower than that of the countries in the previous group. Here again, a slight difference is to be introduced. The variabilities of hazards are notably more penalizing for Myanmar and Vietnam; the two other countries however show a slightly higher vulnerability. In all these countries the main risk comes from hydro-meteorological hazards even though Vietnam and even more Myanmar are concerned also by earthquake risks.

- Thailand is different from the other countries by its relatively low risk level (the risk is referred to as being moderately high). The destructive phenomena, floods in particular, are not rare in this country which is also occasionally affect by cyclones. The degree of exposure to natural hazards is thus globally comparable to that of the countries in the previous group. However, the level of vulnerability is clearly much lower as shown by most socio-economic and demographic factors. This implies that the ability to respond to risks or crises or at least an ability to absorb the consequences of disasters is appreciably higher here than in the other countries.

Though integrating many parameters constituting risk, this assessment does not take into account the national variety. The hazards are unequally distributed according to their types, just like the human presence varies according to the territories. Considering the relatively limited number of countries studied, it has been possible to identify different territories prone to risks, this approach facilitating any comparisons and diagnoses. It effectively shows the existence of common points and differences regarding the risk assessment in the seven countries. 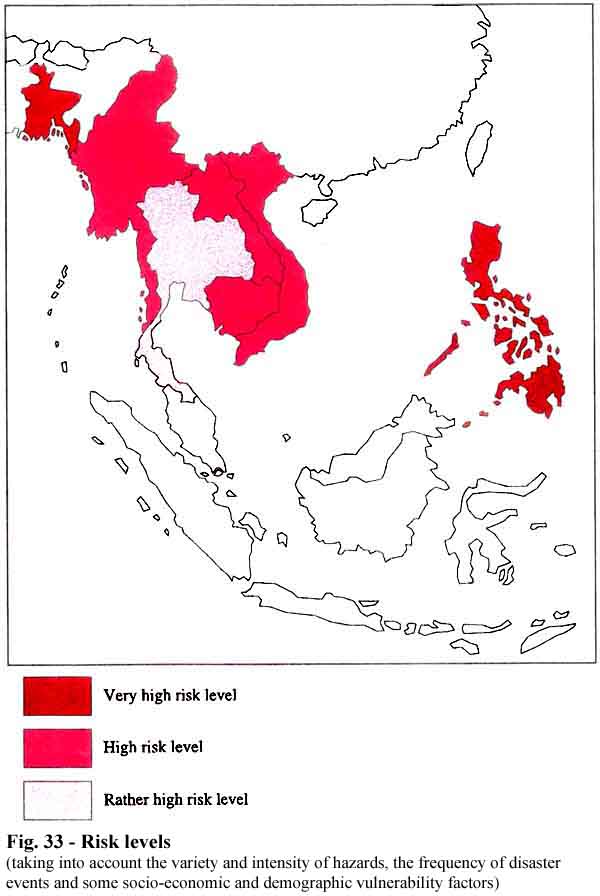 Fig. 33 - Risk levels (taking into account the variety and intensity of hazards, the frequency of disaster events and some socio-economic and demographic vulnerability factors)