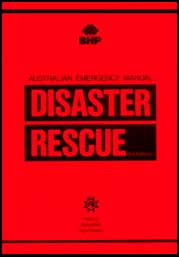 3.25 Two methods of mousing a hook are currently used. The 'standard' method used over the years (Figure 3:13), has an inherent problem. In cases where a sling is attached to a hook, which may be moved so as to cause displacement, the gear or block may become inadvertently twisted so that the sling engages the mousing instead of the hook (Figure 3:14). Therefore care must be taken when using this method. In cases where two or more eyes of slings are engaged by a hook, it is difficult, but not impossible to lash the eyes into the cup of the hook, so that they cannot be displaced accidently. Figure 3:15 shows one method.

The mousing twine is used on the bight for speed of application and strength. It is first hitched to the hook above the bulge of the shank so that it cannot be pulled downward. It is then led towards the cup of the hook, being fixed to the shank again by one or more half hitches prior to the formation of the first figure of eight or diagonal lashing turns. These are passed around the hook on alternate sides of the sling eyes. At least 2 half hitches are passed around the diagonal turns and inside the eyes of the slings to prevent the bights of the diagonal turns from sliding over the bill of the hook.

Fig 3:14 When load is released, sling can jump across mousing