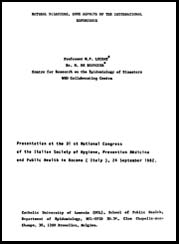 Natural disasters can be defined as ecological disruptions exceeding the adjustment capacity of the affected community (5).

All disasters can be divided into five time phases (5) (9): the predisaster or inter-disaster phase, the pre-impact or warning phase, the impact phase, the emergency, and the recovery phase. Figure 1 shows the classical gap between health needs and available resources when a disaster strikes. Negative effects on health can be decreased by reducing the expected health needs through an alleviation of the risks and by working on a better 'fit' of health resources and needs through an improved efficacy and efficiency of intervention.

Let us go briefly through each phase:

1° The pre-disaster phase, which should better be termed interdisaster phase. This is the time for prevention and preparedness. For most natural hazards, the respective risks according to geographic areas can be mapped. For example, zones of tectonic instability are well identified, where earthquakes are occurring recurrently. China, Turkey, Iran or Italy are, among other countries, situated in such a zone and have with Central and South American States suffered repeatedly from earthquakes with high death tolls. Prevention may be based on two types of measures:

Without insisting on the evacuation measures, because they are generally unmanageable, anti-seismic engineering is quite effective, although the building cost is estimated to increase by some 15 % and the techniques have to be applied to large areas.

Studies conducted in Turkey, and also in Central America, have shown how inappropriate building techniques can contribute to deaths and casualties after earthquakes.

The relatively new habit of using concrete slabs as a roof laid on a wall of adobe bricks has badly influenced the casualty rates in the 1976 guatemalian earthquake (3). Statistics in Turkey drawn from earthquakes of the last 15 years (7) have shown how the number of deaths increases from West to East of the country. This is mainly due to different building methods. Stone houses are markedly safer than adobe constructions.

Data from other earthquakes in the Mediterranean area show that older, traditional buildings were at greatest risk during the earthquakes in Sicily (1968), Skopje, Yugoslavia (1963), Friuli, Italy (1976), and Campania, Italy, 1980.

Getting trapped under the rubble gives the victim about ten times more chance of being injured (6).

There is also a close association between the number of floors and the injury rate. But in Guatemala after the 1976 earthquake (3), or even after the earthquake of 1980 in Southern Italy (6), there was no evidence of a relationship between death or injury, and room, the number of exit doors or the location of people within a room at the time of the disaster.

2° The pro-impact phase, that is the time for warning. Flight is probably the best way to escape deaths or casualties. In China, successful warning saved many lifes from earthquakes (2), and in Managua, Nicaragua (1978) the preceding shocks made people sleep outside which spared them from getting killed.

3° The impact and 4° the relief phase

If first aid is to be effective it must be provided within hours of the disaster; it should therefore be an integral part of primary health care.

Figure 2 shows the proportion of people liberated from the debris after the 1980 earthquake in Italy in function of time and survival. The bulk of the rescue work is done by local people (Time Lib50 = 15 h.) and the probability of liberating people alive after a two days delay is very low.

This indicates that self-help and reliance on the community's own resources night contribute a great deal more to mitigation of damages than belated outside assistance. This has plain implications for disaster preparedness. It suggests that in disaster-prone areas it is well worthwhile educating the people in methods of rescue and adequately training community workers and medical personnel. On the other hand only immediate inflow of trained rescue experts, e.g. army personnel may increase the number of people who can be treated medically by local and incoming health workers.

The rate of people extricated dead from the debris after the earthquake in Italy (1980) is about the same for all age groups exposed. Only the oldest age group experienced a slightly higher mortality (1.5 times the mean) (Table I).

This age specific pattern is not like what is described for Guatemala (1976) (1) where mortality rates were found to be high for the very young and the very old, but relatively low for those aged 15-44 years. A similar age-specific mortality was noted in Nicaragua after the earthquake of 1972.

A study on mid term mortality showed that once people are liberated alive, very few die. Of the 516 injured, in the study sample, only 14 died (27 ‰) in the following 18 months period. This is remarkable because these figures are close to the expected mortality figures for the Italian population in normal times. Medical intervention after the earthquake on those still eligible for medical care was most effective, leaving a very narrow margin for improvement if any.

Fractures are an important part of the casualties. In general each age group and each part of the body are touched evenly (except Guatemala and Nicaragua, about 11 % clavicle fractures, (1)).

Data collected in Guatemala (1) showed that in less than a week the pattern of morbidity in the capital city has returned to pre-disaster level, the emergency phase, that is the period of acute need for emergency primary care, being over within 7-8 days. Following the 1972 Nicaragua earthquake, this phase was over after day 5, the types of patients seen in hospital thereafter being similar to those in any general hospital during normal time.

Effect on the prevalence and incidence of communicable diseases form another important aspect of the picture. Mass immunization are often practiced while the risk of specific diseases is low or nil. The result of such procedures is to divert useful and badly needed personnel from more important activities and to run the risk to increasing the incidence of hepatitis. The respective value of vaccination, protection of environmental conditions, i.e. sanitation and water supply, and early detection of foci of communicable diseases in time of disaster should be carefully evaluated for each disease. Clearly, there is a place for epidemiological surveillance. A good example of the machinery of such surveillance under emergency conditions was given in the aftermath of the Italian earthquake (1980) (4).

5° Finally, there is rehabilitation, that is the restoration of the pre-disaster conditions, or even, as sometimes hoped for, an improvement on previous situation.

I shall not insist on this only to say that long-term rehabilitation starts from the very first moment of relief. Too often, measures taken in a rush during relief (for example provision of inadequate medical care or shelters) can prejudice rehabilitation in the long term.