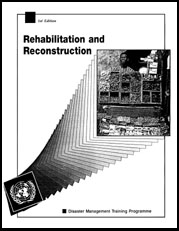 This glossary lists the disaster management terms as used throughout this module. Different usages which UNDP and other users of this module might encounter in other documents are mentioned in the definitions as necessary.

The process of determining the impact of a disaster or events on a society, the needs for immediate, emergency measures to save and sustain the lives of survivors, and the possibilities for expediting recovery and development.

Assessment is an interdisciplinary process undertaken in phases and involving on-the-spot surveys and the collation, evaluation and interpretation of information from various sources concerning both direct and indirect losses, short- and long-term effects. It involves determining not only what has happened and what assistance might be needed, but also defining objectives and how relevant assistance can actually be provided to the victims. It requires attention to both short-term needs and long-term implications.

The occurrence of a sudden or major misfortune which disrupts the basic fabric and normal functioning of a society (or community). An event or series of events which gives rise to casualties and/or damage or loss of property, infrastructure, essential services or means of livelihood on a scale which is beyond the normal capacity of the affected communities to cope with unaided.

Disaster is sometimes also used to describe a catastrophic situation in which the normal patterns of life (or eco-systems) have been disrupted and extraordinary, emergency interventions are required to save and preserve human lives and/or the environment. Disasters are frequently categorized according to their perceived causes and speed of impact. [See: Sudden natural disasters; Slow-onset disasters; Technological disasters; Human-made disasters]

A collective term encompassing all aspects of planning for and responding to disasters, including both pre- and post-disaster activities. It refers to the management of both the risks and the consequences of disasters.

A collective term used to encompass all activities undertaken in anticipation of the occurrence of a potentially disasterous event, including preparedness and long-term risk reduction measures.

The process of planning and implementing measures to reduce the risks associated with known natural and man-made hazards and to deal with disasters which do occur. Strategies and specific measures are designed on the basis of risk assessments and political decisions concerning the levels of risk which are considered to be acceptable and the resources to be allocated (by the national and sub-national authorities and external donors).

Mitigation has been used by some institutions/authors in a narrower sense, excluding preparedness. It has occasionally been defined to include post-disaster response, then being equivalent to disaster management, as defined in this glossary.

Measures that ensure the readiness and ability of a society to (a) forecast and take precautionary measures in advance of an imminent threat (in cases where advance warnings are possible), and (b) respond to and cope with the effects of a disaster by organizing and delivering timely and effective rescue, relief and other appropriate post-disaster assistance.

Preparedness involves the development and regular testing of warning systems (linked to forecasting systems) and plans for evacuation or other measures to be taken during a disaster alert period to minimize potential loss of life and physical damage; the education and training of officials and the population at risk; the establishment of policies, standards, organizational arrangements and operational plans to be applied following a disaster impact; the securing of resources (possibly including the stockpiling of supplies and the earmarking of funds); and the training of intervention teams. It must be supported by enabling legislation.

An extraordinary situation in which people are unable to meet their basic survival needs, or there are serious and immediate threats to human life and well being.

An emergency situation may arise as a result of a disaster, a cumulative process of neglect or environmental degradation, or when a disaster threatens and emergency measures have to be taken to prevent or at least limit the effects of the eventual impact.

The actions taken in response to a disaster warning or alert to minimize or contain the eventual negative effects, and those taken to save and preserve lives and provide basic services in the immediate aftermath of a disaster impact, and for as long as an emergency situation prevails.

This includes, as and where needed: evacuation (pre- or post-disaster impact) and other precautionary measures; fire- and flood-fighting measures; search and rescue; relief; and the establishment of essential communications and transport services.

Precautionary (pre-impact) measures are taken on the basis of established preparedness plans. Post-disaster emergency responses are planned and implemented on the basis of the (post-impact) assessment.

Natural phenomena which occur in proximity and pose a threat to people, structures or economic assets and may cause disaster. They are caused by biological, geological, seismic, hydrological, or meteorological conditions or processes in the natural environment.

A period when there is no immediate threat but long-term actions are taken in anticipation of the impact in the future of known hazards.

The permanent reconstruction or replacement of severely damaged physical structures, the full restoration of all services and local infrastructure, and the revitalization of the economy (including agriculture).

Reconstruction must be fully integrated into ongoing long-term development plans taking account of future disaster risks and possibilities to reduce those risks by the incorporation of appropriate mitigation measures. Damaged structures and services may not necessarily be restored in their previous form or locations. It may include the replacement of any temporary arrangements established as a part of emergency response or rehabilitation.

The period and actions taken following the emergency phase to enable victims to resume normal lives and means of livelihood, and to restore infrastructure, services, and the economy in a manner appropriate to long-term needs and defined development objectives.

Recovery encompasses both rehabilitation and reconstruction, and may include the continuation of certain relief or welfare measures in favour of particular disadvantaged, vulnerable groups.

Actions taken in the aftermath of a disaster to enable basic services to resume functioning, assist victims’ self-help efforts to repair dwellings and community facilities, and revive economic activities (including agriculture).

Rehabilitation focuses on enabling the affected populations (families and local communities) to resume more-or-less normal (pre-disaster) patterns of life. It may be considered as a transitional phase between (i) immediate relief and more major, long-term reconstruction and (ii) the pursuit of ongoing development.

The provision on a humanitarian basis of material aid and emergency medical care necessary to save and preserve human lives and enable families to meet their basic needs for shelter, clothing, water, and food (including the means to prepare food).

Relief supplies and services are provided, free of charge, in the period immediately following a sudden disaster. They may need to be provided for extended periods in the case of slow-onset emergency situations and population displacements (refugees, internally and externally displaced people).

The period immediately following the occurrence of a sudden disaster (or the late discovery of a neglected/deteriorated slow-onset situation) when exceptional measures have to be taken to meet the basic needs of the survivors in respect of shelter, water, food, and medical care.

Sudden calamities caused by natural phenomena such as earthquakes, floods, tropical storms, or volcanic eruptions. They strike with little or no warning and have an immediate adverse impact on human populations, activities, and economic systems.

The extent to which a community, structure, service, or geographic area is likely to be damaged or disrupted by the impact of a particular disaster hazard, on account of their nature, construction, and proximity to hazardous terrain or a disaster-prone area.

For engineering purposes, vulnerability is a mathematical function defined as the degree of loss to a given element at risk, or set of such elements, expected to result from the impact of a disaster hazard of a given magnitude. It is specific to a particular type of structure, and expressed on a scale of 0 (no damage) to 1 (total damage).

For more general socio-economic purposes and macro-level analyses, vulnerability is a less-strictly-defined concept. It incorporates considerations of both the intrinsic value of the elements concerned and their functional value in contributing to communal well-being in general and to emergency response and post-disaster recovery in particular. In many cases, it is necessary (and sufficient) to settle for a qualitative classification in terms of “high,” “medium,” and “low;” or explicit statements concerning the disruption likely to be suffered.

Arrangements to rapidly disseminate information concerning imminent disaster threats to government officials, institutions and the population at large in the areas at immediate risk. They normally relate to tropical storms and floods.

A warning system involves links to forecasting systems, the organizational and decision-making processes to decide on the issuing of particular warnings, and the communications facilities (radio and other) to broadcast the warnings. Their effectiveness depends on the prior education of officials and the population to the meaning of the warnings and the actions each should take.