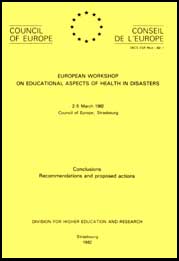 The workshop was aware of the great range of disasters, extending down to large-scale accidents such as train crashes. The form of the meetings was, however, on disasters where the existing structure of life of the community is disrupted overall and resources are overwhelmed by the very scale of the disaster. Among those considered were:

Although the workshop was conscious of the problems posed by nuclear disasters, the issues raised were considered to be sufficiently different to warrant special deliberation elsewhere.

In discussion it become apparent that European health personnel are involved in two major categories of disasters, differing in their location and needs:

- Acute catastrophes may be experienced in many parts of the world; here the prime need is for prompt relief. In practice this means that European workers are largely involved in their own countries’ disaster situations.

- The longer term refugee or displaced persons due to drought or war disasters are, by contrast, much more frequent in third world countries. European workers are generally becoming more involved in such situations through inter and non-governmental organisations.

The two categories of workers who require training are therefore clearly demarcated.