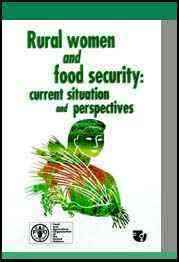 Education is one of the most critical areas of empowerment for women and enhances their contributions to household food security. The relationship between food security and education stems from the fact that educated men and women farmers are more likely to have access to and use information and technology to produce more food, and are more likely to take advantage of extension services and credit facilities. An educated woman is also more likely to provide better health care and nutrition to her family members, and to encourage her children to pursue education. Indeed, there is a strong positive relationship between reducing the gender gap in education and economic growth on the national level (Sadeghi, 1995).

Rural women in the Near East lag far behind men and their urban counterparts in education and training, in spite of major wide-scale campaigns to address this issue. According the United Nations (1991), the North Africa and West Asia region has the second lowest percentage of literate women in the world. In this region, over 70 percent of women aged 25 and over are illiterate. The rural female illiteracy rate in the region is over 90 percent, the highest figure, when compared with other regions of the world. Although the female literacy rate more than doubled between 1970 and 1990, two-thirds of the region's estimated 65 million illiterate adults are women.

Girls receive much less schooling than boys, although the gap is quickly shrinking as a result of compulsory education laws in many countries of the region, and because of large efforts in the building of free government schools in rural areas. In 1960, the enrolment rate for girls was 28 percent. This figure had soared by 1990 to 70 percent (UNICEF, 1996:49). In the rural areas, the gap between boys and girls in primary and secondary school enrolment is larger than it is in urban regions. This is mainly attributed to economic necessity and strong conservative traditions, as well as to the limited number of schools at the village level and the reluctance of parents to send their girls to distant educational facilities. Girls are withdrawn from school at an early stage for marriage and because they can assist their mothers in household and farm work.

At secondary schools, vocational schools and universities, the gap between male and female enrolment is higher, although the number of women seeking higher education in agriculture is increasing in all countries of the region. The number of female students enrolled in higher agricultural education was highest in Jordan (45.1 percent) followed by Morocco (37 percent), Turkey (36.8 percent), Lebanon (35 percent) and Egypt (31.4 percent). In Cyprus, Iran, Iraq, Oman, Tunisia and Yemen, less than 30 percent of students enrolled in higher agricultural education were women (FAO, 1995c). As a result, very few women in the region work in agricultural institutions.