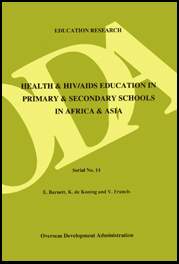 1. This report sets out to describe current policy and practice related to health and AIDS education in primary and secondary schools in Africa and Asia. It focuses on: the health and education context, and the priority attached HIV/AIDS; curriculum content; teaching methods; teacher preparation and the concerns of young people with regards to health generally and AIDS specifically.

2. The report draws on published and unpublished literature as well as empirical work in four countries: Pakistan, India, Uganda and Ghana. The empirical work combines key informant and documentary analysis of stated policy and practice, with detailed work carried out in selected schools in each of the countries. The schools data pays particular attention to the worries and concerns of young people. As such, it may provide a useful starting point for discussion on developing "student centred" health education curricula.

Key issues in the implementation of health education in schools

3. Conclusions from the literature suggest that to date, evaluation of health education in schools demonstrates that it can substantially improve knowledge on health topics. Evidence of effects on behaviour are more limited, and indicate the importance of supporting education with health services, and with paying attention to the broader "health environment" of the school. Evidence of school health education having a direct effect on health outcomes remains problematic, and inconclusive.

5. There is evidence from a number of African and Asian countries to indicate that health education is included in curricula - but that it is generally very limited. There are examples of both "separate subject" and "integrated" health education. The latter appear to be more successful in ensuring that children receive some teaching in this area.

6. Curriculum content follows a fairly standard pattern in many countries - broadly in line with WHO recommendations - and usually includes the following elements: personal hygiene, food safety, nutrition diet, sanitation, and common diseases. Further items which are seen less frequently are: dental hygiene, exercise, drugs, accidents. Sex or population education is usually mentioned in text books but taught superficially, and with considerable discomfort by teachers. HIV/AIDS is included either in sex/population education, or (Uganda) in common diseases. Coverage in the Asian countries is minimal at present, and kept to very basic information, not related to sexual intercourse. In Ghana and Uganda, the coverage is more detailed. Only Uganda appears to be starting to consider moving forward from basic information provision to addressing practical issues connected with safe sex, and with the care of people with AIDS.

7. Teaching methods in all countries predominantly focus on didactic approaches. However, there are examples of more participatory approaches to education, especially in Uganda. There are also a growing range of examples of innovative extra-curricular activities (eg: health clubs, magazines, drama competitions, child-to-child activities). Uganda provides a range of examples - and has experienced the catalytic effect of AIDS education on its broader health education programme. NGOs often play a key role in fostering innovation.

8. Teacher preparation on health education is lacking in all countries studied except for Uganda, where an in-service approach has been in operation since 1987, and pre-service training is now being developed.

9. Whilst there are exceptions to the rule, the "health environments" of many schools in Africa and Asia are generally reported to be poor (often lacking basic hygiene and drinking water facilities, providing no or inadequate food, poor lighting and ventilation etc.).

10. School health services are equally rudimentary, and often lacking entirely. However, there are a growing number of countries experimenting with more targeted health interventions through schools
(eg: deworming; micronutrient supplementation).

11. There have been few attempts to use health needs assessments of school aged children as a basis for health education planning (although Ghana has done some useful work in this area). There is even less evidence in Africa and Asia of researching the concerns of young people in order to aid curriculum planning. The school studies are a first attempt to redress this problem - building on successful work in this area which is becoming commonplace in the UK, Europe and Australia.

12. There are very few examples of on-going monitoring or evaluation work related to school health education programmes. Rather more is available on evaluating mass media campaigns on AIDS awareness.

Conclusions from the four case studies

13. Pakistan (Punjab): Results from both the policy analysis and from the school studies indicate a low level of activity in health education generally, and virtually no evidence of development around AIDS. Young people show a limited awareness or understanding of health issues - although several speak with tremendous feeling and concern about the problems of urban pollution. Due to the official requirement that the children should not be asked directly about sexual knowledge and HIV, it was not possible to engage the school children in the additional draw and write study or the focus group discussions specifically about AIDS and HIV. Difficulties with this aspect of the research are indicative of a variety of serious constraints to development, suggesting that, for AIDS education in particular, it may be preferable to work through non-government agencies initially, until more widespread work becomes acceptable. On health education, a "health intervention" approach may make greater progress and have a clearer impact than would attempts at curriculum development. However, the sustainability of such an intervention would need to be given careful consideration, alongside its benefits (in terms of who is reached) - given low levels of school enrolment.

14. India (Kerala): Evidence from central level (both national and state) suggests quite a sophisticated view of health education in schools, with detailed inclusion in a specialized curriculum, some integration in other subjects, and the development of health clubs for extra-curricular activities. This is not yet however fully apparent in practice. There is some evidence to suggest that detailed teaching around health is often sacrificed for "examined" studies. Attempts to make health teaching more active than didactic have not achieved noticeable success to date - although there is awareness of the need for a more active approach amongst some teachers. In the schools included in the study, health clubs are present in name only. AIDS education in schools is seen to be important and a necessary step - but as yet has not been fully thought through or planned. Evidence from young people showed substantially greater awareness of AIDS than teachers interviewed anticipated - but also showed several important areas of misinformation.

15. Uganda: Uganda has many exciting examples of innovation and development within school health education generally and AIDS education particularly. There is a well established School Health Education Programme, which is supported by policy, by established coordinating mechanisms at central level, and is relatively well researched both from the angle of needs assessment and evaluation. AIDS education is integrated into this work, and is well resourced with innovative materials and specially trained teams of trainers. Programme implementation is reasonably effective, although a number of problems have inevitably arisen - including the need to establish much better local coordination and strengthening of planned but so far insufficiently implemented monitoring and evaluation systems.

Evidence from the young people themselves shows insight into a wide variety of health issues including a detailed understanding of AIDS prevention. There are a number of concerns which stand out including observations on environmental health and sanitation, on different aspects of nutrition, drugs, a variety of diseases, and more personal concerns focused on family life (especially mistreatment at home), and success and failure at school. AIDS was the most frequently mentioned illness (at a stage in data collection where the young people were not aware of our interest in AIDS). This contrasted with the other three countries, where there was little or no general indication of a concern about AIDS amongst young people. In terms of moving forward on AIDS education, there is much to commend in terms of current practice, and obvious areas which now need to be developed, iv including more emphasis on the development of "life-skills", counselling options in schools, training teachers in the use of interactive teaching methods.

16. Ghana: Ghana provides a quite complicated picture on development in health education. There is not the policy development at central level which is evident in Uganda - and yet there is substantial health coverage in the syllabus, which can be described in some detail by teachers, and in rather less detail by students. There are several emerging activities (eg: school health surveys, health intervention programmes, child-to-child developments, ad hoc health clubs), and also an emerging school health unit within the Ministry of Education. However, the basic infrastructure and active coordination between health and education still needs to be developed, and the development of a coherent strategy would help to ensure that different strands of activity become complementary. This is true for AIDS work as well as general health education.

The perspective put forward by the young people places much more emphasis on problems with home, family, and friends (de: more to do with emotional well-being) than on personal health issues suggesting some value in strengthening guidance and counselling services and pastoral roles in schools. Work in AIDS education is needed to support current mass media input. The problems which have shown up here have more to do with emphasis than on mix-information (eg: an apparent preference to dwell upon blood transmission of AIDS, rather than getting a clear understanding of sexual transmission). There is still plenty of work required on basic aspects of AIDS awareness, and valuable work to be done by, for example, some voluntary youth organizations, in finding acceptable ways forward for developing a more skills-oriented approach to AIDS education.