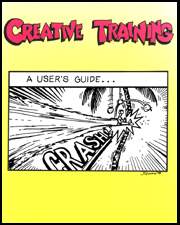 Animated Comics Role-play Activity (ACRA) combines verbal and visual traditions prevalent in learner-centered education. Its use of comics provides a lively and challenging presentation of the situations that happen in life. When used in awareness workshops, participants unravel together their perceptions on themes like environment, governance and gender.

ACRA ensures active interaction because the participants are both performers and scriptwriters involved in a drama of their own making. By acting out the roles of players in a semi-defined story, the participants present their perceptions of a particular reality, act on this simulated situation and share their insights.

ACRA is a technique developed by the Popular Education for People's Empowerment (PEPE), a non-government organization (NGO) based in Manila, Philippines.

2. Prepare the comic balloons as shown below. Make 5-6 sets of these balloons on craft or bond paper. Make them large enough (at least 30 x 20 cm) to accommodate clear and big handwriting.

1. Divide the participants into several groups, one group to act as narrator and the others assigned to the main characters in the story (one group per character).

2. Explain that you will use comic pictures to suggest a scene, and that one group will narrate the story, and the others speak for the characters using comic balloons.

3. Give the narrators the comic frame(s) and overlays, and outline the story to them. Explain that they will alter the scene as they change the overlays.

4. Give the other groups paper or comic balloons and tell them which character(s) they will be. Tell them that they will have 45 seconds to write their responses each time.

5. Ask narrator(s) to set the scene and introduce the story. Then ask one of the character groups to start the dialogue. Give them 45 seconds to write their dialogue line(s) in one of the types of bubble, and then hold it up and read it out loud.

6. Let the other group(s) respond with their dialogue and when appropriate, ask the narrators to change the overlays and tell another step in the story.

7. Stop the activity after achieving the twists and turns of the story.

8. Process the activity through the following questions:

· What did you feel while acting out your role?

· Has the situation or something similar ever happened to you? Has this happened in your community or in your line of work?

· What did you do? What did other people do in such a situation?

· What insights have you gained?

1. You can use paper cutouts as overlays if you have no transparencies.
2. You can also use an overhead projector to display the scenes.