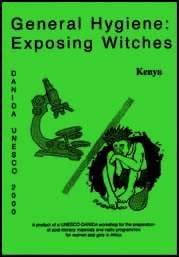 Political leaders and development specialists around the world have recognised that illiteracy - particularly among women - seriously undermines their education and development efforts. Many believe that literacy programmes need revision to render them relevant to women’s lives in today’s Africa. Relevant programmes determine whether women will stay in the programmes long enough to benefit fully from the information and skills they offer.

This post-literacy booklet is one of an ever-growing series of learning materials produced under UNESCO-DANIDA’s Special Project for Women and Girls in Africa. The series presents some sample of the products of the UNESCO Regional and their follow-up National Workshops which took place between 1997 and 2000 in Africa.

During these two-week workshops, African women and men involved in literacy work were introduced to the concept of gender sensitivity and to addressing gender equity issues through basic education. They had, before the workshops began, selected their target communities and carried out needs assessments. The analyses of these assessments at the workshops served as the basis for identifying the priority issues to be addressed in the booklets. Each writer worked on their chosen topic with the support and advice from the entire group and resource persons. The texts were also illustrated with simple line drawings by local illustrators.

The Literacy and Non-formal Education Section, Division of Basic Education of UNESCO edited the text and prepared the design-layout for the final product which will be distributed world-wide.

Though the booklets are intended for use with neo-literate women and out-of-school girls, the messages in the stories and the radio programme scripts that accompany them are also relevant for use as supplementary reading materials in formal schools for readers of both sexes.

The subjects of the booklets, based on the needs assessments, reflect a wide range of needs and conditions of African women - from Senegal to Kenya, from Mali to South Africa, from Niger to Malawi. A list of common concerns has emerged. These include: HIV-AIDS, domestic violence, the exploitation of girls employed as domestic servants, the lack of positive role models for women and girls, the economic potential of women through small business development, the negative consequences of child marriage, and the need for a more equal division of labour between men and women in the home.

Each booklet describes one way of treating a subject of high priority to African women. In the process, the authors have attempted to render the material gender-sensitive. They have tried to present African women and girls and their families in the African context and view the issues and problems from their perspective.

We hope these booklets will inspire readers, as they did their authors, to reflect on some of life’s common situations, problems and issues that ordinary women and men face every day. The questions accompanying each booklet will help readers ask questions and find answers to some of the issues which also touch their own lives. How the characters in these booklets cope with specific situations, their trials and tribulations, can serve as lessons for women and men living together in 21st Century Africa.