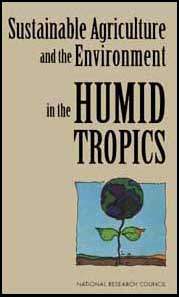 The disciplines, multidisciplinary experiences, expertise, and countries of the world that are represented by the many individuals who have generously contributed to this report constitute a very long list. Because of the efforts of the many who shared ideas and offered background knowledge, the committee was able to expand its views of issues relating to sustainable agriculture and the environment in the humid tropics and benefit from a variety of perspectives.

Among the many individuals whose work was of special significance to this report are the authors of the appended paper, the country profiles, and their collaborators. The descriptive data and analyses presented in the seven country profiles, contained in Part Two of the report, provided much of the foundation for the committee's work. In addition to the authors and their collaborators, the committee acknowledges the contributions of Cyril B. Brown, Purdue University; Avtar Kaul, Winrock International; Daniel Nepstad, Woods Hole Research Center; and Christopher Uhl, Pennsylvania State University. (Both Nepstad and Uhl are associated with the Center for Agroforestry Research of the Eastern Amazon, Belem, Brazil.) Michael Hayes provided valuable editorial assistance in preparing the country profiles for publication.

To broaden its information resources, the committee convened two regional meetings on agricultural and environmental practices and policies in the humid tropics. The first meeting was held at the Faculty of Agronomy, University of Costa Rica, in San Jose. The second was held in Bangkok, Thailand, under the auspices of the Asian Regional Office of the National Research Council.

During the course of its deliberations, the committee sought the counsel and advice of independent scholars and individuals representing a range of organizations. Among those who gave generously of their experience were Robert O. Blake, Committee on Agricultural Sustainability for Developing Countries; Erick Fernandes, Thurman Grove, and Cheryl Palm, North Carolina State University; Douglas Lathwell, Cornell University; Charles H. Murray, Food and Agriculture Organization of the United Nations; Stephen L. Rawlins, U.S. Department of Agriculture; R. D. H. Rowe, World Bank; Roger A. Sedjo, Resources for the Future; and John S. Spears, Consultative Group on International Agricultural Research. The assistance of Andrea Kaus and Veronique M. Rorive, University of California at Riverside, was also helpful to the committee.

Research assistance was provided by three student interns, who were sponsored by the Midwest Universities Consortium for International Activities, Inc. The committee extends special thanks to Joi Brooks, University of Illinois at Urbana, and Jil Reifschneider and Kristine Agard, University of Wisconsin.

The committee is grateful to Curt Meine and Barbara Rice, whose skill and teamwork transformed imperfect and incomplete draft materials into a comprehensive report. We are particularly grateful to Jay Davenport, whose insights and support were invaluable to the committee throughout the course of the study.

And the committee especially recognizes the efforts of Pedro Sanchez, who served as committee chairman until assuming responsibilities as director general of the International Center for Research in Agroforestry, Nairobi, Kenya.