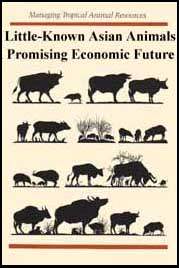 This report began as a brief examination of the domesticated banteng, a little studied bovine that is an important livestock resource in eastern Indonesia. But the study expanded to include other possibly useful but obscure bovines of Asia: the madura (a hybrid between banteng and cattle), gaur, mithan, kouprey, anoa, tamaraw, yak, and yakows-hybrids formed by crossing yaks with cattle. Four pig species were also included (the bearded pig, the Sulawesi warty pig, the Javan warty pig, and the pygmy hog) that are important traditional resources in parts of Asia, as well as the babirusa-a piglike, wild animal of Sulawesi that may have a rudimentary rumen. (Asia also has some interesting, little-known breeds of cattle, water buffalo, sheep, goats, and the common pig, but in this report we have chosen to highlight unconventional species only.)

These animals are unfamiliar to international animal science. This report aims to kindle awareness of their possible promise and to stimulate their introduction into projects in the world's animal research facilities. Only through active investigation will the potential of these species - most of which are now familiar only to a small number of wildlife specialists - become clear. Many are threatened with extinction; their genetic merits should be assessed before it is too late.

Development agencies and governments in the tropics should regard local species, such as those described in this report, as important genetic material for bolstering the long-term success of domestic livestock breeding programs. These indigenous resources can probably be improved genetically to compare favorably with imported livestock, particularly in difficult tropical environments.

This report was prepared after Hugh Popenoe, Chairman of the Advisory Committee on Technology Innovation (ACTI), and Noel Vietmeyer of the ACT! staff visited banteng researchers in Indonesia, northern Australia, and Papua New Guinea in May 1981. More than 90 researchers (see contributor's list) provided information to the report through correspondence.

ACTI is a committee of the Board on Science and Technology for International Development, National Research Council. It assesses unconventional resources and technologies that might prove especially applicable to problems of developing countries. Current titles in the ACTI series Managing Tropical Animal Resources are:

The production of these books has been supported largely by the U.S. Agency for International Development (AID). Program costs for this study were sponsored by AID'S Bureau for Asia, and staff costs by AID'S Office of the Science Advisor, which also made possible the free distribution of this report.

This is an exploratory volume. It will, perhaps, lead in a few years' time to a more complete book on indigenous Asian animals - and perhaps also to similar books on little-known animals of Africa and Latin America. If you have material to contribute to the future edition, please send it to Noel Vietmeyer, JH213, National Academy of Sciences, 2101 Constitution Avenue, Washington, D.C. 20418, USA, who will contact you when any new publication on this subject is planned.