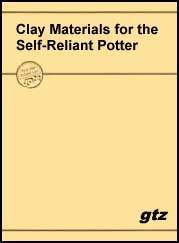 Clay is a product of the continuous weatheringof the Earth's surface. Our study of clay begins with how the planet Earth was formed.

The Earth was created some 5,000 million years ago, according to scientific theory. At first it was a gaseous molten mass, which slowlycontracted. While the mass was still molten, theheavier materials like iron and nickel sunk tothe centre of the Earth. As the hot Earth gradually cooled, a layer of solid materials formed the crust.The crust feels very secure to us, but it is only about 40 km thick, floating on a 3000 km deeplayer of molten materials (fig.6-1).

Slow currents in this molten sea cause whole continents to move at speeds of up to 2 cm per year. Where continents grind against each other, earthquakes and volcanoes occur. The map at fig.6-2 shows how all the big continent shave changed location during the last 200 million years. Africa was then so far to the South tha tit was covered by polar ice masses. The Indian plate moved North, and when it collided with the Asian continent the highest mountains on Earth- the Himalayas - were formed.In this way the crust of the Earth has changed continuously since it was formed. Where we see mountains today there may formerly have beenwide oceans, and tropical forests may have been covered with arctic ice million of years ago. weathering: Weathering also causes major changes. Solidrocks are broken up by the alternate action ofsun, rain and ice. The resulting small rockparticles rocks are carried away by water, and even mountains wear away in a few million years. Clay and many other ceramic rawmaterials are produced by this process.

A mineral is a substance which has a uniform chemical composition, in the form of one or many crystals. Quartz and feldspar are minerals, and so is salt. Salt crystals (sodium chloride) have a cubic shape which can easily be seen under a magnifying glass. When salt is dissolved in a glass of water and left for a while crystals will form slowly as the water evaporates.

Most rocks are made up of several different minerals, though some rocks like gypsum only consist of one mineral. The rock named granite contains the minerals quartz, feldspar and mica, and the individual crystals can be seen clearly with a magnifying glass. Rocks can be arranged in three major groups; igneous rocks, sedimentary rocks and metamor- phic rocks.

When the young Earth slowly started to cool, different minerals formed crystals in the mass of molten rocks (also named magma). A variety of crystalline rocks were formed, according to the different conditions of their locality. Thus the igneous rock called basalt was created at a great depth, and contains little feldspar compared to granite, which formed near the surface.

If the rock cooled very slowly, the crystals had time to grow large, whereas rapid cooling produces small crystals. This process is still going on today where movement in the crust of the Earth causes deep layers of molten materials to rise to the surface. An erupting volcano lets out hot magma on the surface, where it cools quickly. The resulting volcanic rocks have microscopic size crystals, since the rapid cooling allows little time for the crystals to grow.

Sedimentary rocks are made of materials produced by the crumbling of old rocks. All rocks eventually break up in the course of time when exposed to weather, and the broken up rock particles are carried away by water. These particles of clay and sand are transported to lower lying areas, or to the sea where they settle one layer upon the other. In the span of millions of years, the growing weight of sediments causes the deeper layers to compact and gradually turn into rocks, called sedimentary rocks. Much later, the movement of landmasses sometimes turns the whole area upside down, so that the old sea floor, with its sedimentary rocks, becomes a new range of mountains.

Sedimentary rocks like sandstone and shale can often be recognized by their layered structure. Limestone is a sedimentary rock created by the left over skeletons of billions of small animals that lived in the ancient seas. Gypsum is formed by chemical sedimentation, in areas where seawater evaporated on a large scale. This produced a high concentration of gypsum which formed crystals in a fashion similar to the formation of salt crystals in a glass of salty water.

Igneous and sedimentary rocks are sometimes changed into new forms by high temperatures and high pressure. Marble is an example of a metamorphic rock that is formed from a sedimentary rock named limestone.

Fig.8-2 shows how one continental plate moves under another, causing some rocks to be exposed to high temperatures and pressure. Sedimentary or metamorphic rocks melt, and may later return to the surface as igneous rocks. These later will erode to become clay and sedimentary rocks. Fig.8-3 shows this rock cycle graphically.

The formation of clay from rock is a most common event, taking place daily everywhere in the world. If a piece of granite is picked up and broken in two, the fresh faces of the stone will show a shiny surface and the crystals of the different minerals can be identified. The black shaded crystals are mica. The yellow, white or red colored crystals with a pearly shine are different types of feldspar. The clear colorless crystals are quartz. The weathered surface of the granite will most probably show a rough surface with many holes, where the soluble feldspar crystals have been washed away by rain, whereas the less soluble crystals of mica and quartz remain. This is the beginning of the process of changing feldspar into clay.

Weathering breaks up the granite rocks and enables the water to wash away the soluble soda, potash or lime parts of the feldspar. These soluble parts are carried away by water and the soda ends up adding to the salt of the oceans. The process is shown in fig.9-1. Most of the remaining alumina and silica of the feldspar combines with water and forms a new mineral: clay. Some of the silica from the feldspar does not take part in formation of clay and forms instead another mineral known as quartz.

Clays which have not moved from the location of their parent rock are known as primary clays. Kaolin (also called China clay) is a primary clay.

In some cases the parent rock was exposed to steam from volcanic activity or to acid seeping down from above. The acid or hot steam slowly changed the rock into clay, quartz and mica in the same location. Such a deposit may only contain 25% clay, and in some cases where the granite rock is only partly changed the clay content may be 10% or less.

Kaolin clays are pure, without impurities like iron oxide and limestone. Therefore, they have a high melting point (about 1780 C) and they fire to a white colour. Kaolin has little plasticity due to its large particle size.

Clays which have been removed from their place of origin and have settled somewhere else are called secondary clays. Figure illustrates this process; rain washes the clay out from the site of its parent rock and the clay is carried downhill by rivers and streams.

A rapid river can even carry small stones, but as the flow of the river slows down, the heavy particles will start to settle, then the coarser sand, and finally the fine sand. The clay remains suspended in the water and will only settle where the river flows into a lake or a sea. At the mouth of the river, the silt and coarser clay will settle, whereas the fine clay will only settle further away. In this way, the original materials of the erosion process are graded according to their particle size (fig.10-1).

The clay may travel thousands of kilometers before it settles. During transport the clay particles are subjected to the grinding action of pebbles in the streams. This works very much like grinding in a ball mill and makes the clay particles still smaller, thereby adding plasticity to the final clay.

The river or stream carrying the clay will also pick up all kinds of impurities on its way through the landscape. These impurities will later be deposited together with the clay. It is very rare to find a pure secondary clay, i.e. a white firing plastic clay.

The most common impurity is iron oxide (rust) which gives the fired clay a buff, red or brown colour. Iron oxide exists in slightly different forms which may be yellow, red, grey or brown in the raw clay. However, the different iron oxides all turn into red iron oxide (FE2.O3) during an oxidizing firing. The clay may also contain organic matter which was added in the form of leaves and other vegetation from contemporary forests. This organic matter (carbon) gives the raw clay a grey or black colour, but as the carbon normally burns away during firing it does not affect the fired colour of the clay. Black clay is usually not black after firing. Other impurities like feldspar, mica and lime- stone lower the melting point of clay.

In general, secondary clays are plastic and have a lower melting point compared to primary clays, due to their impurities. The quality of secon- dary clays varies from one deposit to another, and even within the same deposit the quality of a clay can vary considerably.