The UNCHS programme slum survey has shown that in Rajkot, 160,000 people live in 28/000 households in the 74 slums localities. The average household size is 5.71.

The population in the slums varies from one locality to another. The distribution of the slum localities in Rajkot in different ranges of population is given in Table 3.1. 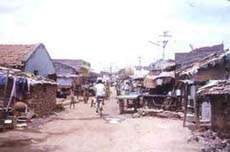 Poor housing, lack of facilities, poverty and illiteracy were widespread prior to the UNCHS programme interventions in Rajkot slums.

Religion and caste play an important role in the social structure of the Rajkot slums. This is normal from the nomenclature itself. Certain slum pockets are known by the caste of its inhabitants. The majority (almost 90 per cent) of the slum dwellers are Hindus, the remaining being Muslims and Christians.

If the capacity to earn and productivity are analysed taking age as a factor, the slum population of Rajkot had the following characteristics. The productive population, i.e. those people who were above 20 but less than 60, is about 53 per cent. The definitely dependent population, i.e. those less than 15 years and those above 60 worked out to about 35 percent. The population falling under the age group between 15 and 19 years is either dependent or productive. This is summarised as follows:

In Rajkot slums, children below school going age form 8.91 per cent and older children (above 6 years) form 3.67 per cent of the total population. The age group 5-17 pre-dominantly consist of school going children and account for 22.7 per cent of the total population. Primary and secondary education is free of cost. Adult education programmes are being arranged under the UBS project through NGOs.

Most of the slum population reside either in pucca or semi-pucca houses. About 10 per cent reside in huts made of kutcha (temporary) materials. Generally a house has one multi-purpose room, kitchen and verandah. The roofing material is either local tile or precast slabs. Because of the limited space, no toilet facility is available. To provide sanitation facilities, the RMC has constructed community latrines and surface drainage for disposal of waste water. Underground sewerage is also available in some of the slum settlements. Solid waste generated by the people is being collected and transported regularly through the city's solid waste management scheme. The maintenance of community latrine is a constant and vexing problem because of which the RMC has implemented two programmes, namely:

1. Conversion of community latrines into pay and use toilets
2. Provision of (low-cost sanitation) individual latrines with 80 per cent subsidy from RMC.

The successful implementation if these efforts has had a positive impact on health and hygiene in the slums. The classification of the slum dwelling units according to type of building material is as follows:

As indicated above, 94 per cent of the hutments in the slums in Rajkot are built of semi-permanent or temporary (kutcha) material. This indicates the poor condition of the dwellings in slum population.