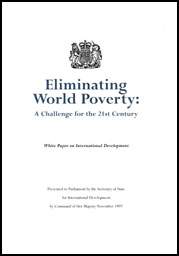 2.8 Of the net development assistance provided by the international community, some 30 per cent is made available through the multilateral development institutions (the World Bank Group, the regional development banks and the UN), the European Union (EU) and the Commonwealth. Half (about £1.1 billion) of our programme is spent multilaterally (see Figures 9 & 10). This allows us to have influence over a much larger area. We cannot have bilateral programmes everywhere. We can, however, use our influence in the multilateral system to increase international commitment to poverty eradication, and work in such a way that our multilateral and bilateral efforts complement each other. 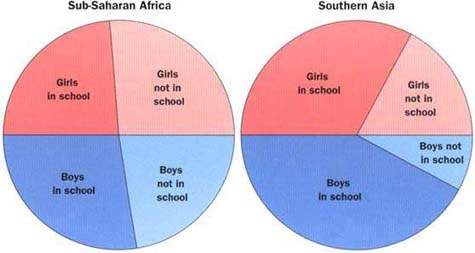 FIGURE 8 - Proportion in Primary School in 1995

Proportion in primary school is the number of enrolled pupils/students aged 6-11 as a proportion of the total population in that age group.

2.9 The multilateral development institutions make a unique contribution to development, not least through the scale of their resources and the influence they can exercise over the policies of partner governments. They can set standards, pioneer new techniques and address sensitive issues which would be extremely difficult for bilateral donors to pursue. Their political neutrality and technical expertise enable them to take a leadership and coordination role on major problems and global issues such as debt reduction, human rights and refugees, gender equality, the environment and the AIDS pandemic.

2.10 The World Bank and International Monetary Fund (IMF) have played a central role in the international development agenda over recent decades. Both institutions will be at the centre of the efforts to pursue the international development targets. We will support a closely integrated approach in which the IMF contributes to the establishment of sound macro-economic and financial policies to encourage pro-poor growth, while the Bank complements these efforts by promoting policy, institutional reforms and projects that focus on the elimination of poverty.

2.11 We will continue our efforts to improve the effectiveness and efficiency of the multilateral development institutions and the European Union’s development programmes. We want to see them adapt to the new priorities, decentralise aid management and enhance the quality of their programmes. We also want to see greater efforts made to ensure a coherent approach across agencies.

2.12 Our first priority is to encourage all the multilateral development institutions to strengthen their commitment to poverty elimination. The World Bank and UN development agencies have made the clearest commitment to the international development targets, which are based on agreements reached at a series of UN Summits. We welcome this commitment. But the targets must be entrenched in day-to-day decision-making. We will use our influence with the EC and the regional development banks to strengthen the poverty focus of their operations and encourage them to set quantifiable targets for poverty reduction, and measure progress towards these.

1. Comprises aid to developing countries, assistance to CEE/CA countries from 1989, all global environmental assistance from 1991 and administrative costs.

1. Comprises aid to developing countries, assistance to CEE/CA countries from 1989, all global environmental assistance from 1991 and administrative costs.

2.13 We will encourage the multilateral development institutions to devote more attention to evaluating and monitoring the output of their activities, and to harmonise their impact assessment systems. We will also encourage them to integrate gender considerations and environmental and social sustainability into their projects, including - in the case of the World Bank and the regional development banks - enhanced support for activities which help the poorest, such as education, health and clean water.

2.14 In the development banks, we will also encourage better-off countries to graduate from low-interest loans to loans on near commercial terms. Eventually, they should graduate entirely from such borrowing so that development lending is concentrated where it is needed. This points to a shift in the use of the more concessional funds away from eastern Asia and Latin America towards the countries of sub-Saharan Africa and South Asia.

2.15 Over 30 per cent of our development programme is spent through the European Union. We will use our influence in Europe, in particular during our Presidency in the first half of 1998, to help shape the way in which these funds are spent. Our aims will be to direct a larger share of resources to the poorest countries, to secure commitments from the Commission and other member states to measurable targets, especially on poverty elimination, and to help increase the effectiveness of these funds. We will play an active and constructive role in the Development Council, in other fora, and in bilateral contacts with the Commission. We will seek in particular to maintain and enhance the position of the poorest countries during the forthcoming renegotiation of the Lomonvention which expires in 2000, and which covers 70 African, Caribbean and Pacific countries.

2.16 We will enhance our support for the role of the United Nations in development and especially for the UN Secretary-General’s recently launched reform package, which we hope will provide the leaner and more effective organisation necessary to deliver the poverty elimination targets set out in the 1997 UN Human Development Report. The Government’s decisions to rejoin the United Nations Educational, Scientific and Cultural Organization (UNESCO) and to reverse the previous Government’s intention to leave the United Nations Industrial Development Organization (UNIDO) demonstrate our strong commitment to the United Nations and our desire to work from within in order to strengthen the system. In the UN, as in all multilateral institutions, we will seek to build new alliances for change and work more closely with our developing country partners to increase the effectiveness of these agencies in meeting the needs of poor countries.

2.17 The Commonwealth will have a full part to play in poverty elimination. Many of those countries in which we are most active and where we will be seeking a new partnership for development are members of the Commonwealth. It has an essential part to play in promoting understanding across a wide and diverse range of countries particularly through its support for education, including the prestigious Commonwealth Scholarships and Fellowships Scheme. Its strength lies in its informality and in its ability to mobilise the political will for poverty elimination.