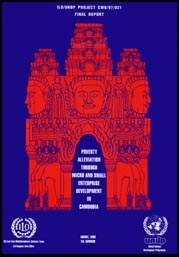 The First Socioeconomic Development Plan 1996-2000 of the Kingdom of Cambodia has established the “framework for the medium-term development of the country”. The Plan has a clear focus on poverty alleviation and, at the same time, lays down some investment priorities with view to promoting longer-term development and industrialisation. The major priorities expressed in the Plan are; reducing poverty and developing human resources, developing the productive base, generating employment through the private sector, increasing domestic self-reliance, strengthening absorptive capacity and regional cooperation.

The main elements of the Royal Government’s development programme in the Plan that are particularly relevant to micro and small enterprise development as well as private sector development are: (i) employment generation, (ii) rural development, (iii) development of the productive base, (iv) human resource development, (v) investment in physical infrastructure, (vi) macro economic stability, (vii) legal and administrative framework and (viii) reintegration into the global economy.

(i) “Generation of employment through labour-intensive manufacturing for export, the promotion of small-scale enterprises and the urban informal sector and the development of tourism.”

This is a clear expression of the Government priority endorsing the needs for micro (albeit using the phrase “the informal sector”) and small enterprise development. It is compatible with the overall focus on poverty alleviation since the key to any long-term and sustained attack on poverty (as well as any attempt to decrease dependence on external assistance) is a growing economy and particularly the growth that generates employment and enhances livelihood.

The Plan further points out that the promising development of medium-scale formal sector manufacturing is not enough to absorb the annual increases in the urban labour force resulting from natural increase and migration as well as the planned civil service retrenchment and demobilisation. Therefore, “a substantial contribution to labour absorption will have to come from small-scale enterprises and informal sector activity of all kinds.”

The industrial development strategy, which will be described in more detail later, includes focuses on labour-intensive, export-oriented industry and industries with linkages to tourism.

The development of tourism, for which the Cambodian potential is large and the micro and small enterprises could potentially play a big role, could be an important means of generating jobs, income tax revenues and foreign exchange quite rapidly in the short term.

(ii) “Achievement of poverty alleviation and broad participation in the development process through a focus on participatory rural development.”

Micro and small enterprise (MSE) activities are a means for people to participate in development through their day-to-day effort in improving their lives. It would facilitate the improvement of people’s livelihood and self-reliance.

MSE development is one of the important components of rural development to achieve increases in (commercially-oriented) farm and non-farm incomes and to help limit rural-urban migration and the transfer of more poverty to the urban areas. Cambodia can learn from a lesson of Thailand and avoid the emergence of another “Bangkok”.

(iii) “Development of the productive base of the economy (through rice production, livestock production and diversification of the commercial agricultural sector).”

Some of the MSEs, particularly micro enterprises in the rural areas, are engaged in agricultural and livestock activities (e.g. mushroom growing, duck raising). The agricultural, forestry and fisheries sector also has an important relevance to MSEs in terms of potential backward and forward linkages; MSEs produce farm instruments, tools and machines and buy agricultural, livestock, forestry and fishery products as their raw materials. It is also important to note that higher income of rural population generates larger market for MSEs4.

4 The mission encountered such an example with a noodle making enterprise whose sales dropped because the farmers (who are their major customers) lost much income due to flood.

(iv) “The upgrading of human skills and their adaptation to those that are commensurate with a modern market economy.”

Skills are simply necessary to operate micro and small enterprises and to generate income. Human resource development is furthermore important for Cambodia to meet the challenges of the market economy in managing enterprises, adapting and developing technologies and to compete effectively with enterprises of neighbouring countries, particularly because such capacities were deliberately destroyed in the late 1970s. It will be essential as the economy will be more reintegrated into the regional and global economies.

Improving road network in quantity and quality will reduce costs of transporting goods and people and result in more economic activities. It will facilitate the expansion of internal and international trade and thus the commercialisation of agriculture.

(vi) “Establishment of macroeconomic stability and creation of the institutions, instruments and policies necessary for prudent, long-term economic management.”

Macroeconomic stability and sound economic management are a prerequisite for the MSE development as well as the private sector development since productive investment, either small or large, domestic or foreign, is made only in a stable economic environment.

The Government aims to establish an “enabling environment” for domestic and foreign investment, through achievement of macroeconomic stability and an appropriate legislative base and provision of generous incentives for investment and physical infrastructure, including electricity.

The present predominance of small-scale and informal sector enterprises is one of the factors that make it difficult for the Royal Government to secure government revenue needed to sustain its programmes.

(vii) “Reform of the administrative and judicial institutions of the State, through reorganization of the public service and more effective liaison between central and provincial administrations.”

Capacity to implement laws and regulations constitutes an essential part of an “enabling environment”.

(viii) “Reintegration of the Cambodian economy into the regional and global economies and liaison with regional institutions.”

Cambodia’s location within an increasingly dynamic subregion and within the East Asian region as a whole is seen to offer great opportunities for the longer-term development. But it could pose as a threat because of potential competition from the economically powerful neighbouring countries. The Government has taken on policies that will be directed towards reintegrating the Cambodian economy into the regional and global economies. In successfully coping with the challenges that this objective poses, raising the education and skill levels of the workforce is essential.

The industrial sector is particularly important for MSE development. The Plan includes a specific industrial development strategy which involves the incorporation of the following key parameters:

· Export orientation (with prospective MFN-status and GSP entitlements as incentives);

· Rural industry (including technical and business advice, vocational training and increasing the availability of credit);

· Tourism-related industry (such as building materials, furniture-making and other wood-based industry, metalworking, food industries and handicrafts); and

In order to stimulate industrial development, the Royal Government will pursue a policy of identifying and fostering selected urban areas as “growth centres”. These will be supported through the provision of facilitating infrastructure such as industrial zones and export processing zones (Phnom Penh and Sihanoukville). Battambang, with its hinterland richly endowed in terms of agricultural and fishery resources and favourable location, is expected to play an important role as a focal point in regional economic growth in the west of Cambodia. Tourism-related industries are expected to develop in Siem Reap, and Kampong Cham is expected to lead the development of the eastern part of the country based on the large rural population, significant rubber plantations and processing plants, sugar, tobacco, soybean and banana cultivation and trade with Vietnam.

The Plan particularly outlines the following constraints to be addressed during the period of 1996-2000:

· Low level of education of the work force compared to other countries in the region;

· Cost of energy, water and telecommunications and access to serviced industrial land;

· Inadequacy of the primary road network; and

· Scarcity of credit, particularly for rural and urban small-scale industry.

These constraints were amongst those quoted to the ILO/UNIDO mission team during the interviews and will be partly addressed more in detail in Chapter 9.