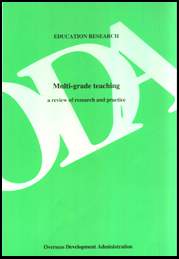 While the provision of primary schooling for children in rural areas has increased over the 1980s, this has been achieved through an increase in the number of one- and two-teacher schools. In the case of the one-teacher school, a teacher can be faced with an age range from ¾ up to 15/16 years, divided into nursery grade (initial) and six grades.

Besides their rural location, a number of other factors influence the multi-grade school. These include

an absence of teacher training. One-and two-teacher schools, located in the most remote rural areas, are considered very low-prestige schools and are allocated the lowest qualified teachers. In the Andean Department of Apurimac, more than 85% of teachers in one-teacher schools have no teaching qualifications (Zu 1989); in the Tambo region in the Central Rainforest, one-teacher schools are staffed by local teachers who have only some years of primary schooling plus a few summer vacation courses. Here class sizes reach 75 students (Heise 1987).

a lack of resources. Rural multi-grade schools are very poorly equipped, not only in terms of the fabric of the school itself but in terms of text books and other educational materials, which in some schools do not exist at all. This poses serious constraints for the teacher who becomes entirely dependent on the blackboard, on which it may be barely possible to write.

The lack of teacher training hinders the use of adequate teaching methodologies, which becomes an acute problem when the teacher is working in a one-teacher school where the student population utilise a diversity of mother tongues depending on their ethnic affiliation

Faced with this situation, a multi-grade teacher will often divide the students into two groups. The first, grades 1 and 2, comprise the monolingual mother tongue students and the second, grades 3 to 6, comprise students with at least some understanding of Spanish. Given that each grade contains students who are repeating the grade and students new to the grade there may be considerable variation in ability within each grade.

Teacher training colleges (Institutos Superiores Pedagos) show little concern for training new teachers to cope with multi-grade classes. This reflects the orientation of teacher training in Peru towards teaching in well equipped urban schools where there is one teacher per grade. Not only is this type of school in the minority but within the education system it is the most prestigious and the most lucrative. The most highly qualified and experienced teachers aim for an urban posting in a Mestizo area where, like themselves, the students are Spanish speaking.

In contrast, the least prestigious schools rural, indigenous one-teacher schools - receive a high percentage of teachers with no training and many such schools find it difficult to get teachers at all. Mestizo teachers arrive with no methodological orientation for multi-grade teaching and no ability to communicate with their mono-lingual students. This situation is linked to the general abandonment and lack of concern for rural regions, in particular those with a high indigenous population. This abandonment encompasses education in general and indigenous education in particular.

Nevertheless, there is a growing concern for improving the quality of primary school education for indigenous peoples in Peru, which has taken the form of a Ministry of Education directive instructing all Instituto Superiores Pedagos to offer training courses for indigenous teachers in intercultural bilingual education. The new courses, however, are designed to encourage teachers to adapt the content of the existing 6 grade curriculum, with its rigid system of grade promotion through formal exams. It does not encourage the development of new styles of pedagogy and classroom organisation which would enhance the task of the multi-grade teacher. The training on these new courses is primarily concerned with developing a satisfactory methodology for teaching Spanish as a second language.

The national curriculum as it stands today provides the possibility for 'unitary' teaching. That is, the curriculum is presented in terms of textbooks for each grade comprising lesson plans and structured in such a way that certain subjects or themes appear through all grades with appropriate levels of ability. However a study in indigenous Amazon schools has shown that teachers appear to lack the ability to organise the official curriculum in terms of thematic units. They work instead with each grade independently and may be dealing with several different topics with several different grades simultaneously (see GaschI>et al. 1987).

The following example from a primary school in the Arakmbut community of San Jose presents a contemporary multi-grade teaching reality in an indigenous area. The primary school is run by two lay-missionary Spanish speaking teachers with no formal teaching qualifications and illustrates the labour intensify of teaching common in many multi-grade schools. The two teachers had divided the students into one class of Initial, Grade 1 and Grade 2, while the other comprised Grades 3, 4, 5 and 6.

The day began with maths and the lesson proceeded in a pattern familiar to the students: Grades 3 and 4 children watched and waited while the teacher wrote fractions on the blackboard for both grades to do together and a sentence explaining what had to be done: "order the fractions according to increasing number, then into decreasing number". The teacher read out this instruction, reminded them of similar work they had being doing the previous day, and then left them to copy everything on the board, including the written instructions, into their exercise books. The teacher then turned her attention to Grades 5 and 6. Once they had been given their work she walked back across the classroom to the group copying the fractions and began to call them to the board one by one to complete fractions. The other children watched and copied so that at the completion of the lesson all the children had perfect answers.

In the second classroom in San Jose the Grade 2 had settled down to copying and completing 2 X table multiplications from the blackboard which kept them occupied for an hour. Meanwhile, Grade 1 worked with the teacher from a colourful poster of a huge grand piano, repeating words which were printed below in Spanish. While the teacher focused most of her attention on this language lesson, she was at the same time overseeing the work of the four Initial Grade students who were restlessly copying over and over again the four words which she had written into their jotters in cursive script.

So, despite the possibility of "unitary" teaching prescribed by the national curriculum, the teachers continue to organise their work as though they were teaching mono-grade. They move continually from one discrete group of students studying one subject to another group, often engaged on a completely different lesson.

Where schools have no supervision and local authority and training college staff never visit, personnel from educational institutions and training colleges have no idea of what it is like to teach in a school in an indigenous community (Heise 1987). Moreover, they have little experience of poorly equipped multi-grade classrooms, as their experience pertains mostly to the relatively privileged urban settings surrounding the training colleges. An exception to this situation, however, can be found in some of the NGO teacher training programmes set up specifically for training indigenous, and bilingual intercultural teachers in the Amazon region. These include programmes such as the Programme for Intercultural Bilingual Education in the Alto Napo River; the Bicultural and Bilingual Experimental Education Project for the Ashaninka of the River Tambo run by the Amazon Centre for Anthropology and Applied Practice (CAAAP); and the Association for the Development of the Peruvian Rainforest (AIDESEP) and the Instituto Superior Pedago de Loreto (ISPL) programme for training indigenous teachers in intercultural bilingual education.

These programmes multi-grade teaching as an integral and important characteristic of the teaching situation in rural schools. Because these programmes have been set up specifically for indigenous teachers, one- and two-teachers schools, lack of teaching materials, lack of formal training, absence of supervision and distance from urban centres become central foci of the programmes. Multi-grade indigenous community schools are not considered remote and low prestige. Furthermore, solutions to the neglect in these schools and communities are sought at the local level and in the schools themselves.

The AIDESEP/ISPL programme has been designed by and for indigenous Amazon teachers working in communities with the same linguistic and ethnic background. An important part of the training course is the production of a new primary curriculum by the trainee designed to suit the indigenous communities and their particular situation. This includes a new pedagogical approach to multi-grade teaching, methodology and classroom practice. It is in multi-grade classrooms in small one or two-teacher schools that the trainee will be most free to introduce and trial his/her new curriculum during the final three years of this training course. Over this period the trainee will carry out teaching practice with on-site support and supervision from a local team of trainers comprising educators, anthropologists, linguists and community members. Unlike other training courses the NGO programmes emphasise the importance of the college coming to the trainee rather an overwhelming emphasis on in-college work.

The new curricula which students on the AIDESEP/ISPL course are each developing focus on problems and issues which are significant for the indigenous community and avoid 'fragmenting the indigenous reality and view of the world by dividing knowledge into discrete subjects' in a manner alien to the society (see Trapnell 1990; 1991). Similarly, they aim to avoid fragmenting students into discrete autonomous grades which do not reflect the way children learn within their indigenous society and makes poor use of both student and teacher ability and potential.

Though there is still very little direct reference to multi-grade teaching in the reports and articles concerning these new NGO programmes, they break from the centralised graded and highly authoritarian primary teaching methods and rigid curriculum propagated by the Ministry of Education. This break suggests that in the future multi-grade teaching may be given more explicit recognition in teacher training in both NGO and Ministry of Education programmes, and that multi-grade classrooms may be recognised as a new potentially rich learning context rather than an unavoidable setback.