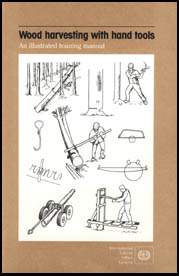 If cross-cut saws are used, a comprehensive tool outfit is required. The saw must be well maintained in order to make the job easy and efficient. Properly maintained saws require less energy in use and increase production.

The saw should be made of high-quality steel. For large trees, a straight-back type of saw is preferable (1a) and for small to medium trees a hollow-back type. The cutting edge should be thicker than the back in order to reduce friction and the risk of "binding". The length of the saw should be 100 cm plus the diameter of the tree. The saw should be fitted with detachable handles (1b) which can easily be screwed on and off. A protective cover (1c) is needed to guard the cutting edge during transport.

Peg-tooth type saws are common because they are easy to maintain (2a).

Raker-tooth type saws are preferred by professional workers. They cut faster but require more skill in maintenance (2b).

Saw teeth must do three things:

- cut through the fibres;
- break loose the cut fibres;
- remove the loose fibres (sawdust) from the kerf.