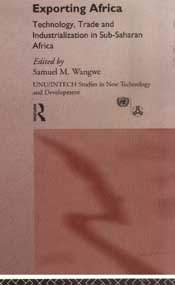 The economic crisis which has hit Africa in the past decade is raising questions about Africa's future position in world trade and whether it has any chance of developing a competitive industrial structure.

Professor Wangwe addresses these questions on the basis of commissioned studies of fifty-five exporting manufacturers in six African countries carried out by local experts of considerable standing in the field. He examines the question of why some firms in the Sub-Saharan economies have been able to maintain their positions in the world market despite generally unfavorable circumstances. In particular the papers seek to understand how these firms have been able to sustain their competitiveness in the face of rapid technological change in the international economy in the context of the threats and promises such change presents to Africa. A case is made for selective complementary investments by governments to build the technological capabilities which are necessary for attaining and maintaining competitiveness.

The country studies present new empirical research and an innovative conceptual framework which will be of interest to academics in the development field and to government and international policy makers.

Samuel M. Wangwe is Director of the Economic and Research Foundation Dar es Salaam. He was Senior Research Fellow at UNU/INTECH between 1991 and 1994.

The books in this series reflect the research initiatives at the United Nations University Institute for New Technologies (UNU/INTECH) based in Maastricht, the Netherlands. This institute is primarily a research centre within the UN system and evaluates the social, political and economic environment in which new technologies are adopted and adapted in the developing world. The books in the series explore the role that technology policies can play in bridging the economic gap between nations, as well as between groups within nations. The authors and contributors are leading scholars in the field of technology and development; their work focuses on:

2 In Pursuit of Science and Technology in Sub-Saharan Africa
J. L. Enos