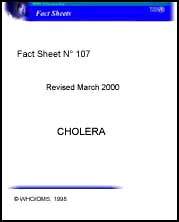 Cholera is an acute intestinal infection caused by the bacterium Vibrio cholerae. It has a short incubation period, from less than one day to five days, and produces an enterotoxin that causes a copious, painless, watery diarrhoea that can quickly lead to severe dehydration and death if treatment is not promptly given. Vomiting also occurs in most patients.

Most persons infected with V. cholerae do not become ill, although the bacterium is present in their faeces for 7-14 days. When illness does occur, more than 90% of episodes are of mild or moderate severity and are difficult to distinguish clinically from other types of acute diarrhoea. Less than 10% of ill persons develop typical cholera with signs of moderate or severe dehydration.

The vibrio responsible for the seventh pandemic, now in progress, is known as V. cholerae O1, biotype El Tor. The current seventh pandemic began in 1961 when the vibrio first appeared as a cause of epidemic cholera in Celebes (Sulawesi), Indonesia. The disease then spread rapidly to other countries of eastern Asia and reached Bangladesh in 1963, India in 1964, and the USSR, Iran and Iraq in 1965-1966.

In 1970 cholera invaded West Africa, which had not experienced the disease for more than 100 years. The disease quickly spread to a number of countries and eventually became endemic in most of the continent. In 1991 cholera struck Latin America, where it had also been absent for more than a century. Within the year it spread to 11 countries, and subsequently throughout the continent.

Until 1992, only V. cholerae serogroup O1 caused epidemic cholera. Some other serogroups could cause sporadic cases of diarrhoea, but not epidemic cholera. Late that year, however, large outbreaks of cholera began in India and Bangladesh that were caused by a previously unrecognized serogroup of V. cholerae, designated O139, synonym Bengal. Isolation of this vibrio has now been reported from 11 countries in South-East Asia. It is still unclear whether V. cholerae O139 will extend to other regions, and careful epidemiological monitoring of the situation is being maintained.

Cholera is spread by contaminated water and food. Sudden large outbreaks are usually caused by a contaminated water supply. Only rarely is cholera transmitted by direct person-to-person contact. In highly endemic areas, it is mainly a disease of young children, although breastfeeding infants are rarely affected.

Vibrio cholerae is often found in the aquatic environment and is part of the normal flora of brackish water and estuaries. It is often associated with algal blooms (plankton), which are influenced by the temperature of the water. Human beings are also one of the reservoirs of the pathogenic form of Vibrio cholerae.

When cholera occurs in an unprepared community, case-fatality rates may be as high as 50% -- usually because there are no facilities for treatment, or because treatment is given too late. In contrast, a well-organized response in a country with a well established diarrhoeal disease control programme can limit the case-fatality rate to less than 1%.

In severe cases, an effective antibiotic can reduce the volume and duration of diarrhoea and the period of vibrio excretion. Tetracycline is the usual antibiotic of choice, but resistance to it is increasing. Other antibiotics that are effective when V. cholerae are sensitive to them include cotrimoxazole, erythromycin, doxycycline, chloramphenicol and furazolidone.

When cholera appears in a community it is essential to ensure three things: hygienic disposal of human faeces, an adequate supply of safe drinking water, and good food hygiene. Effective food hygiene measures include cooking food thoroughly and eating it while still hot; preventing cooked foods from being contaminated by contact with raw foods, including water and ice, contaminated surfaces or flies; and avoiding raw fruits or vegetables unless they are first peeled. Washing hands after defecation, and particularly before contact with food or drinking water, is equally important.

Routine treatment of a community with antibiotics, or “mass chemoprophylaxis”, has no effect on the spread of cholera, nor does restricting travel and trade between countries or between different regions of a country. Setting up a cordon sanitaire at frontiers uses personnel and resources that should be devoted to effective control measures, and hampers collaboration between institutions and countries that should unite their efforts to combat cholera.

Limited stocks of two oral cholera vaccines that provide high-level protection for several months against cholera caused by V. cholerae O1 have recently become available in a few countries. Both are suitable for use by travellers but they have not yet been used on a large scale for public health purposes. Use of this vaccine to prevent or control cholera outbreaks is not recommended because it may give a false sense of security to vaccinated subjects and to health authorities, who may then neglect more effective measures.

The publication “Guidelines for Cholera Control”, available through WHO’s Distribution and Sales Unit, states the following:

“Vibrio cholerae 01 can survive on a variety of foodstuffs for up to five days at ambient temperature and up to 10 days at 5-10 degrees Celsius. The organism can also survive freezing. Low temperatures, however, limit proliferation of the organism and thus may prevent the level of contamination from reaching an infective dose.

“The cholera vibrio is sensitive to acidity and drying, and commercially prepared acidic (ph 4.5 or less) or dried foods are therefore without risk. Gamma irradiation and temperatures above 70 degrees Celsius also destroy the vibrio and foods processed by these methods, according to the standards of the Codex Alimentarius, and

“The foods that cause greatest concern to importing countries are seafood and vegetables that may be consumed raw. However, only rare cases of cholera have occurred as a result of eating food, usually seafood, transported across international borders by individuals.

“...Indeed, although individual cases and clusters of cases have been reported, WHO has not documented a significant outbreak of cholera resulting from commercially imported food.”

In summary, although there is a theoretical risk of cholera transmission with international food trade, the weight of evidence suggests that this risk is very small and can normally be dealt with by means other than an embargo on importation.

WHO believes that the best way to deal with food imports from cholera-affected areas is for importing countries to agree, with food exporters, on good hygienic practices which need to be followed during food handling and processing to prevent, eliminate or minimize the risk of any potential contamination; and to set up arrangements to obtain assurance that these measures are adequately carried out.

At present, WHO has no information that food commercially imported from affected countries has been implicated in outbreaks of cholera in importing countries. The isolated cases of cholera, that have been related to imported food, have been associated with food which had been in the possession of individual travellers. Therefore, it may be concluded that food produced under good manufacturing practices poses only a negligible risk for cholera transmission. Consequently, WHO believes that food import restrictions, based on the sole fact that cholera is epidemic or endemic in a country, are not justified.

All WHO Press Releases, Facts Sheets and Features can be obtained on Internet on the WHO home page http://www.who.int