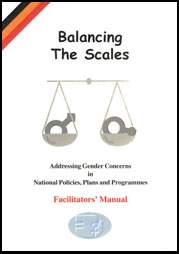 This Facilitators’ Manual is a trainer’s guide for workshops run by the Ugandan Ministry of Gender, Labour and Social Development to address gender concerns in national policy-making and development programmes. It is designed as a companion to the corresponding Participants’ Manual, Balancing the Scales - Addressing Gender Concerns in National Policies, Plans and Programmes. The two manuals, published by the Ministry in June 1999, form the key resource for a series of workshops aimed at developing the gender analysis, policy-making and planning skills of Permanent Secretaries, Directors, Heads of Department and other senior government officers.

Although this training programme has been designed for the top managers and policy-makers in Uganda, its potential scope is much broader. The focus of the manual is on participatory and experiential training methods that stimulate frank and open discussions on gender-related issues and problems. Although most of the exercises and role-plays are East African in their flavour and setting, they cut across all borders - racial and geographical - in the clarity of their message. Gender concerns are, after all, universal concerns.

As a gender facilitator, it is of great importance that you appreciate and adhere to the basic precepts of gender training. Gender training is not purely about women’s empowerment; rather, it is about society as a whole, about attitudes and behaviours towards gender issues - and the need to change certain attitudes and behaviours to create a more progressive and equal society.

This training programme was born from Uganda’s commitment to a gender-responsive development agenda, as outlined in the country’s Constitution and its National Gender Policy, and from the MGLSD’s commitment to breaking through age-old gender barriers. In order to break such fundamental new ground - and to generate a high-level commitment to change - the ministry realised that its training would have to be participatory and interactive, based on the sharing of experiences and ideas, and the promotion of a common, gender-sensitive vision.

The result is a series of training manuals designed to be both informative and interesting. For this reason, each new chapter and exercise in the Participants’ Manual is individually illustrated, and many of the illustrations are replicated as ‘watermarks’ in this Facilitators’ Manual for easy cross-referencing.

All the exercises and case studies have been carefully selected and written to cover the most important gender issues and training points of their respective subjects. At the end of each section in both manuals, you will find a series of ‘Discussion Points’ designed to promote and guide an in-depth discussion of these issues. Clearly, not every point can be covered in a workshop setting - and it will be up to the individual facilitator to decide which subjects can most usefully be covered by their particular participants.

Many sessions in the Facilitators’ Manual also include a comprehensive list of ‘Key Issues’. These ‘checklists’ of vital points are designed as a guide to help you raise the issues that you consider most appropriate and important to your particular workshop - or to the group at hand.

Very few of the exercises or case studies in the manual are compulsory. Many of the sections - for example, those on proverbs, newspaper clippings, and statistics - have a wide range of information grouped under several headings. For this reason, it is important that you take time to study the Participants’ Manual before the workshop, and decide which subjects are most appropriate to the setting and people involved.

Because workshops involving senior officers are often pressed for time, a number of ‘Options’ are offered in this manual to help you keep to a tighter schedule - or to allocate less time to certain issues. In Session 4, for example, the exercises entitled ‘The Choice is Yours’ and ‘Two Families’ are designed to raise similar cultural and moral issues; however, if you have only time for one exercise, the first option will probably be preferable. The Timetables on the following pages recommend a selection of exercises for a three-day and a two-day workshop - although a facilitator could just as easily design a shorter or longer timetable.

As many of the training sessions as possible have been based on real-life situations, which some of your participants may themselves have experienced. Likewise, the sections on planning and analysis methodologies are backed up with examples of how some tried and tested tools have been put to use in the field.

The same experiential approach pervades the chapters on policy-making and management, in which several women employees and leaders recount their experiences as a springboard to a fuller discussion of the influence of gender in bureaucratic settings. The management section also includes a very lively role-play exercise, ‘The Problem Group’, which offers participants the chance to witness and appraise a more animated, physical working environment.

Lastly, the Participants’ Manual covers in some depth the different levels of gender-sensitive policy formulation, and the planning and monitoring tools involved. The closing chapters focus primarily on the Logical Framework Analysis, or ‘Logframe’, which the MGLSD advocates as a central tool for planning and monitoring the gender perspective of development programmes and the gender oriented policies of government ministries - as well as reporting their progress to the ministry and to each other.