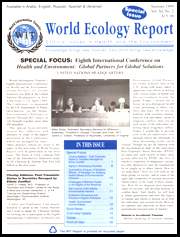 · Philippine President Joseph Estrada on Saturday threatened to defy the dominant Roman Catholic church's ban on birth control, saying the country's rapid population growth had to be checked. In a weekly radio interview Estrada said that with 2.3 percent population growth, the Philippines could have a population of more than 100 million within 25 years, from the current 74.7 million. "That is a big problem. No matter how high our production is... if our production of children is also high, we will always be short of classrooms, of basic services because our population is too large," he said.

· Bacteria That Gorge On Rotting Waste Can Break Down DDT

Chicken and cow manure, old newspapers, straw and wood chips can be used to clean up land contaminated with dangerous chlorinated pesticides such as DDT, according to Canadian scientists at the life sciences firm AstraZeneca.

Finding a practical way to clean up contaminated land is tricky. Digging up soil and moving it elsewhere is no longer acceptable, sealing it in a landfill site is now illegal in the US, and heating it in massive kilns to burn off offending pesticides is expensive. The team at AstraZeneca has come up with an alternative, using local bacteria that feed on organic waste to break down hazardous substances into less harmful by-products in a process called bioremediation.

In a year-long test at an old pesticide factory in Tampa, Florida, AstraZeneca's process, called Xenorem, cut DDT levels in the soil by more than 95 per cent. DDT is considered one of the worst pollutants because its breakdown products, such as DDE, were thought to be almost indestructible. But recent research has shown that DDE can be degraded (This Week, 9 May 1998, p 16) and in the Tampa trial the bacteria reduced levels of DDE, DDD and other chlorinated pesticides to below US Environmental Protection Agency safety limits.

The new technique will remove contaminants at around half to two-thirds of the price of incineration, the next best solution, says Frank Peter, AstraZeneca's director of environmental services. It can also be carried out on site and is environmentally friendly, using natural waste products to help indigenous bacteria gobble up pollutants. "It solves two problems at once," he says. 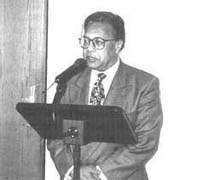 H.E. Ambassador Anwarul Chowdhury, Permanent representative of Bangladesh to the UN, addressing the luncheon on April 23, 1999

· On May 19, supermodel and activist Waris Dirie brought the issue of female genital mutilation to Capitol Hill as part of a briefing on the pending UNFPA funding bill. Senators James Jeffords (R-VT), Harry Reid (D-NV) and Representative Carolyn Maloney (D-NY) joined Dirie at a press conference to urge lawmakers to support House and Senate bills to reinstate the U.S. contribution to the United Nations Population Fund (UNFPA). She emphasized UNFPA's work with nongovernmental organizations (NGOs) to eradicate female genital mutilation, speaking about her own experience as a survivor. Congress eliminated funding last year for the UN Population Fund, for which Dirie is a special ambassador.