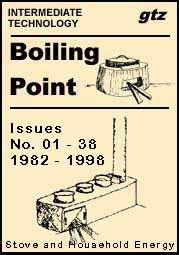 This fourth meeting of 21 key people from the major stove and household energy programmes in the 'North' was attended by representatives of several NGOs and by individuals from FAO and WHO. Its main topic was the contribution which the organizations could make to the implementation of Agenda 21.

The GTZ Household Energy Programme (HEP) submitted a draft of an action paper, and the other organizations will contribute examples of their work (by February 1995). GTZ will then produce a draft publication for approval at the next HEDON meeting in June 1995 in Lund, Sweden. That meeting will consider a permanent office for HEDON.

The World Bank's Third Regional Workshop on Politics, Strategies and Programmes for Traditional Energy, held in Senegal in November 1994 was attended by Dr Petra Wagner.

The HEP team meeting in November.1994 discussed the state of the organization and addressed the following problems and fields of work:

· unpopularity of household energy programmes with funders and national decision makers, and lack of an effective lobby;

· HEP's lack of experience in refugee and emergency aid work;

· HEP's main focus is on heat energy rather than electricity supply;

· HEP's role in relation to afforestation;

· the need for intersectoral collaboration (within and outside GTZ) for work in science and education, forestry, gender issues, energy and transport, refugee help and emergency aid, and health (food security, in-door air pollution and family planning).

Households in Pakistan use about 20.7 million tons of oil equivalent (TOE) a year, which is 54 per cent of its total energy consumption. Biofuels provide 86 per cent of this, and refined fuels such as gas, kerosine and electricity together provide the balance of 14 per cent. In urban households 95 per cent of the energy comes from biofuels. Millions of tons of biomass are obtained from natural vegetation including trees and wood sold in the markets or collected by the families.

The growing shortage of fuelwood has contributed to the rapid depletion of the precious layer of biomass on the hillsides, resulting in soil erosion and, eventually, deforestation. The lengthening daily journeys to collect fuelwood have contributed to increased workloads, especially for women. As Pakistan's population continues to grow, and land becomes more and more scarce, it is difficult to imagine how the next generation of rural families will manage to obtain their daily requirement of household fuel.

People in Pakistan's rural areas are, however, more worried about problems which they cannot handle on their own, problems which hard work, creativity and patience have not yet solved. Issues such as the lack of financial resources, the shortage of health and sanitation facilities, and the scarcity and high cost of education and training are their main concerns. Fuel scarcity is generally seen as a problem of low priority as long as fuel is available in some form.

This is where professional groups and organizations from outside the villages can help. They may not have the means to stop these destructive processes completely, but they can have an impact by slowing down the speed of deterioration, and they are able to draw wider public attention to a very serious problem and perhaps bring in help from other sources.

The market availability of efficient, fuel-saving cooking and heating stoves at affordable prices offers households one way of reducing their fuel needs by about 30 per cent. Information and education on energy issues and discussions about environmental protection at the village and mass media level are greatly needed. Joining hands with people working on income generation, health, and education, and linking village initiatives to them is an essential part of the development process.

Extract from a study by Christina Mundt-Beisel for GTZ

In spite of infectious diseases and a high child mortality rate, the world population is still rapidly growing. One of the many resulting problems is the shortage of fuel for cooking and the associated high rate of deforestation. In Africa, south of the Sahara, every year eight per cent of forested area is lost because of economic uses such as construction timber and industry, and to a lesser extent, as fuelwood. Although private fuelwood consumption is not a main reason for forest loss, it can contribute substantially in arid or semi-arid areas and around large centres of population.

Half of all developing world households cook with biomass, and between 70 and 80 per cent of the population depends on wood as its primary source of warmth and energy. The women, who are traditionally responsible for gathering fuelwood, are forced to spend more time on this task and so have less for more socially beneficial activities.

Successful, improved stove and oven programmes, such as the one in Rwanda, have concentrated on users who would benefit the most, have provided information exchange, and involved participation by constructors, traders, and users during all phases of the programme. It seems more efficient to have mass produced stoves and to provide financial support to the development of stove designs rather than to the buyers. Extension work should be done by women who are already stove or oven users. The positive effects of the improved stoves are better fuel efficiency, reduced pollution, reduced deforestation, financial savings, and improved status for women.

In joint programmes, family planning, health issues, environmental benefits household economy all influence each other. The joint approach of FPP (Family Planning Programme) and HEP (Household Energy Programme) can help to overcome the difficulty of addressing the topic of contraception, informing men and motivating women.

As a first step, aspects of household energy and health care are brought together, and lead to the second step of discussing family planning. The three phases of this joint approach are:

1. Preparatory analysis: data is gathered about cooking habits, fuelwood needs, and the health and nutritional situation.

2. Introductory phase: central points and linkages concerning health and resources are identified tea in-room pollution, and the consequences for health) and solutions are demonstrated. During this phase the confidence of the women and their better understanding of health subjects like pregnancy, child nutrition, and contraception can be addressed.

3 Final phase: the use of improved stoves is surveyed and the FPP is intensified. All questions can be discussed on a broader basis. Positive results with the stoves will strengthen trust and make discussions about contraception easier.

This way a broad basis of trust can be established and support for linkages can be promoted as a step towards greater self-confidence of the women, and towards improved family planning. HEP and FPP can also be introduced through already existing women's groups.

The GTZ-supported Project Foyers Ameliores (PFA), in close co-operation with the Mali Direction Nationale des Affaires Sociales (DNAS), began work in February 1988. Its goal was to disseminate improved metal and clay stoves in 14 towns and in some rural areas.

In 1992, a PFA meeting of governmental and nongovernmental organizations, generated an immense amount of voluntary activity to gather information about the programme. The question is - what caused this sudden desire for closer co-operation between NGOs and government?

All projects working in rural areas have a need for easy exchange of information and ideas, but their isolation often makes this difficult. NGOs particularly face these difficulties, which are intensified because the NGOs also lack financial resources, and rarely receive more than two years of funding. If they had the opportunity to broaden their project activities and make long-term plans they might have greater impact.

Although NGOs do not have the money or other resources to conduct large-scale research or evaluations, they do collect valuable information and identify genuine needs through their grass-roots approach and close contact with target groups. This information may be very useful to other programmes and to funding organizations in the development of more appropriate household technologies.

However, investment in R&D is difficult to justify unless its results are disseminated and applied on a wide scale and shared with target groups. Improvements in methods and the results of appropriate research topics are greatly needed by other NGOs. Stove user interests must be at the centre of all work by stove programmes whether governmental or NGO. Easy and effective, two-way communication channels between the two sides are essential.

Only when the target groups take a personal interest in the creation of the new technology and see its usefulness to them can we expect sustainable development.

Tigray is one of the most densely populated and severely ecologically damaged areas of Ethiopia. After 17 years of war and droughts, about three quarters of the population (mainly small-scale farmers) still depend on relief aid.

The 'Rehabilitation of Food Production' project is part of GTZ's Integrated Food Security Programme in the northern highlands of Ethiopia. The programme aims to transform the food deliveries of the German Ministry for International Co-operation into long-tern food security measures. The target population is about 90,000 in 20,000 small farm households. Ninety per cent of these people are able to support themselves throughout six or eight months of the year. The goal of the current three-year supporting phase is to enable 70 per cent of the households to improve the quality and quantity of food available to them by the end of 1996.

The project strategy is based on 'Food or Cash for Work' measures, as used in the rehabilitation of agricultural production. These will include work such as dam construction, terracing and tree planting to produce long-term environmental improvements.

Since women play the central role in the production and preparation of food this will be a main focus - for example the extension of energy-saving technologies and the reduction in fuelwood use. Assistance will be given to women's groups to grow vegetable gardens and to run grain mills.

Although much has been achieved, the project faces difficulties because of Ethiopia's administrative delays. The staff need more training and experience, the implementing organizations are not yet properly developed and lack finance and equipment. Work plans need more cost evaluation, and field-level administrative staff need more authority and independence. Better training and institution building will be needed to guarantee sustainability.

Report of an evaluation mission in /994

In 1994, Boiling Point No 34 reported GTZ's support for the Tunisian Agence pour la Maitrise de l'Energie (AME), a public organization for the promotion of renewable energy to save woodfuel and protect the forests in the mountainous region of Le Kef. The technologies disseminated include steel lids for the traditional tabouna stove, gas stoves, and steel baking pans - tajines.

It is reported that the lids are worth their price as they save fuel when baking bread, although they tend to blow off and to go rusty.

Gas stoves for bread baking are popular where there is an almost complete absence of fuelwood. However, for the poorer households the cost of the gas and stove is too high, and so cheaper models are being developed. Also, the supply of bottles is unreliable.

The steel baking pan is well accepted and is used on a gas stove or even in the tabouna oven to cook certain dishes but is not popular for baking bread, which is said to have a different taste. A broader range of tajines is being developed and may be more commercially successful.

The present dissemination system stands strongly in the tradition of 'assistance by the government', and the project would like to have more local participation.

It is the woman who determines what is needed in the household even if society views the man as the final decision maker. Women are more sensitive to the problems of wood consumption and de-forestation as they and their children have to collect the wood. The project will survey the energy consumption and habits of the target population.