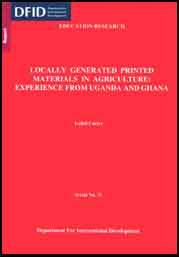 The sources of information fell into two main divisions. Those of major importance were books and information owned by the group, workshops and training sessions attended and local individuals whose knowledge was respected (this included both 'outside experts' and 'indigenous knowledge experts'). (Table 6)

Other named sources with a ranking of less than 20 included: information from commercial companies, group meetings, the Bible, experience, travel, tours, information from head offices and distance education.

Sources of significant but lesser importance included government resource personnel, contact through letters or visits to organisations both within country and overseas and use of a nearby library or resource centre. Interestingly, minor and little used sources included the ordering of relevant books which in well resourced countries would be expected to come near the top of the list. In addition the use of libraries and resource centres received a very low ranking. However, their seeming irrelevance may rather have reflected their lack of availability (Menou, 1991; de Horowitz, 1993; Mzeyimana-Kerpen.1993).

Surprisingly, printed information owned by the groups varied little between the three categories and was almost as important for small informal groups as for large, well funded groupings. However, RPAs had virtually no access to resource centres or the opportunity of purchasing books. Access to training workshops was higher for GOs and NGOs, presumably since they were more likely to be informed of the availability of such courses and secondly, were more likely to have the resources to enable staff to attend. Government resource people such as extension agents and local knowledgeable individuals were of considerably more importance to RPAs and GDOs than for larger GOs and NGOs. All categories of groups indicated that they made good use of letters to organisations. GOs and NGOs had much better access to resource centres and were more likely to be able to purchase necessary books. They also tended to be less dependent on government resource people and other organisations. The overall ranking places books and other printed information in priority of place in terms of information sources used, for all three categories of groups. This was a finding of some significance for this research.

Four out of the five most important sources were exogenous to the respondents and, given that individuals with expertise might be both exogenous or indigenous to groups, this figure is may be slightly higher. Outside information was thus seen as highly significant and valued by all categories of groups. These results gave no indication of the value attached to indigenous knowledge from outside the

Missing data 6 cases local community which may be shared either by development workers or local newsletters and the comparable value attached to what could be termed 'scientific' information from outside sources. This was an area which needed to be further investigated during the in-depth research.

Given the focus of the research on printed information, postal survey respondents were asked to assess the availability of reading materials within their target communities. (Table 7)

Some interesting observations emerged here. Firstly only a tiny minority of respondents (3%) saw their target communities as having good access to reading materials. Nearly half (41%) lacked good access to reading materials of any kind. Nearly a quarter believed their access was restricted either through lack of purchasing power or the lack of material in local languages. Nearly a third were believed to have no interest in reading materials because they were not literate. It is worth noting that these were the perceptions of the organisations providing information; not of the target communities themselves and these perceptions needed further investigation during Phase II. These figures, admittedly from a sample group, nevertheless may serve to indicate the extent of the famine of printed information in many developing countries and to highlight the difficulty people have in maintaining literacy when there is so little to read.

8 Other comments included: no materials on the subject of development, an increasing interest in vernacular languages and unawareness of how to order materials.

(Table 8) A quarter of respondents (25%) were satisfied with the information they recently obtained on a specific topic. Those who lacked access to useful contacts were very few, maybe revealing that everyone knows somewhere to turn to for advice but would often like more contacts. 14% lacked funds to purchase relevant books and information, a figure that was significantly higher for GDOs and RPAs. Overall, 75% were dissatisfied with their information sources for one reason or another.

When cross-tabulated with income and region, there were no significant relationships apparent -revealing that perceptions of information access were not always linked with income or geographical location. When the three categories were looked at individually, surprisingly, it was the RPAs who seemed most content with their access to outside information; possibly a reflection that their horizons were limited by the available sources in their immediate area?

(Table 9) Part of the postal survey sought to probe respondents' attitudes towards the manner in which information was presented. The majority of respondents found access to outside information a problem, with two thirds unable to obtain information in the local language and just over a third finding information too expensive or lacking good contacts. Just under a third (27%) found the available information difficult to understand. Only a quarter (24%) were relatively well-resourced with adequate access to information and often without enough time to read all available information. Only 15% of groups had funding to enable them to purchase necessary books.

TABLE 9 - Attitudes to presentation of information of postal survey respondents

When the three categories are compared, all RPAs lacked funding to purchase books and found material more difficult to understand. They also found it hardest to find good contacts. Staff in GOs and NGOs were better able to make good contacts, though they had considerably less time to read available materials.

When cross-tabulated with the number of expatriate staff, some significant differences did emerge. For example, very few groups (5%) with expatriate workers agreed that information was either too expensive or difficult to understand.

Newsletters, both national and international, are one source of outside information which is often available free of charge, irrespective of geographical location. Access to Footsteps newsletter was a common factor amongst all respondents. The role of newsletters proved a significant one in providing information. (Table 10)

These results are interesting when compared with the average information overload common in industrial countries (Hamelink, 1995; UNDP, 1998). Of the 5% who reported they lacked time to read the newsletters they received, nearly all were in high income groups. The distribution of newsletters was similar for all three categories.

Readers were asked to name the two most useful newsletters they received. A total of 81 individual newsletters were named - the majority of which were only mentioned by one reader - and they included 31 newsletters in local languages. Not surprisingly perhaps, as it was the one they all had in common and because this might be an area where respondents were trying to include the 'right' answer, 123 listed Footsteps as one of the most useful. Table 11 indicates those newsletters mentioned by 5 or more respondents. 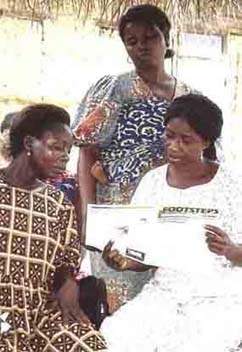 Newsletters were a valued and regular source of new information.

Newsletters were grouped together under the categories and sources shown in Table 12. This serves to illustrate the considerable range of available newsletters. A third of newsletters were from local or regional sources within developing countries, the remaining two-thirds from industrial country sources. All newsletters listed that were familiar to the researcher, were known to be available free of charge to those working in developing countries. Given that newsletters were among the first sources of information listed as most useful and that so many were freely available, it was apparent that they were an extremely valuable and regular source of new information.

5.5.5 Use of information from Footsteps

86% of respondents indicated that they had used information from Footsteps articles, of which over half had used three or more different ideas and nearly a fifth too many to mention. Of these, 54% provided clear evidence of the uptake of this information and a further 22% felt it likely that some people had implemented the new ideas but were unsure of the evidence to prove this. More research would be needed to investigate how often further supplementary information from other sources was also available to respondents. However, these findings indicate a readiness to implement new ideas from a printed source in isolation from other sources of information.

The final part of the postal survey looked only at those groups who were involved in production of printed materials and was completed by 60% of respondents. The results of this are given in Section 7 which looks at the production of locally generated training materials (page 55).