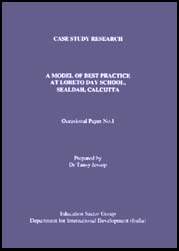 The orthodox literature on 'best practice' identifies excellent schools as those whose notable achievements include academic progress, the development of sound personal and social values, quality relationships between pupils and teachers, achievements in the sporting or cultural arenas, good resourcing, and the constant search to lead the way in education by striving to improve performance in all of these areas (DES, 1977; Gray and Wilcox, 1995). Beyond these performance indicators are crucial dimensions related to a school "knowing where it is going and what it is about", that is, having a visible and explicit ideology or overarching goal which is understood by all and becomes part of the collective will of the school (Gray & Wilcox, 1995, p. 19; Handy & Aitken, 1986, p. 17; Rudduck, 1991). The more powerful the goal in terms of its larger significance, its ability to challenge while still being feasible, the more it will galvanise school members in quest of its attainment (Bradford & Cohen, 1984, cited in Handy & Aitken, 1986). In the literature on education in the developing world, 'best practice' is often defined as a 'quality' issue, where the fundamentals relate to efficiency (making better use of available resources); relevance to the needs and context of learners, and what has been described as something more, that is, the indefinable of taking education beyond efficiency and relevance into the realm of values (Hawes and Stephens, 1990, p. 22).

Alternative perspectives on 'best practice' tend to draw a closer relationship between schooling and society, and implicitly ask the question: What is education for? The very notion of schooling as a taken-for-granted exercise, somehow delinked from the bigger issues of society like democracy, freedom, equality and human rights or conversely, exploitation, oppression, and inequality is questioned by these analyses (Postman and Weingartner, 1969; Freire, 1972; Meier, 1995). In searching for a model of 'best practice' which embraces both the quality issues of the nineties in the form of good academic results and personal/social development, as well as the critical human rights issues of the day, one is looking for a model that brings together equity and quality, rather than making them mutually exclusive 6.

What is unique about Loreto Sealdah is its ability to straddle these two forms of 'best practice' simultaneously. The school measures well against conventional criteria such as the academic results in the West Bengal Exam Board public examinations, where more than 50% of Year XII pupils attain a first class pass annually, while a proactive concern for social justice is the keystone of the school programme. Even more interesting is the school's ability to defy the logic that social class really counts in the success or failure of a school (Bernstein, 1971, 1973; 1975; Meier, 1995, p. 97). The question for the researcher interested in good practice must be how the school is able to ensure good academic standards with a non-selective intake and a non-competitive ideology. What is distinctive about the values, the school ethos, the teaching and learning, the teachers, the learning materials, and the culture of the school that promotes learning in spite of its flouting conventional selection and social class norms?

It is to these questions that the next section will turn.