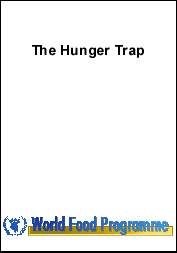 In households facing continuing hunger, babies in mothers'wombs, the newborn and young children do not receive adequate nutrition. This results in inadequate development of physical and mental capacities of the new generation.


A physically and mentally weak new generation is doomed to continue being hungry. It will have no chance of escaping from poverty. Poverty stays because hunger has made it dynastic.


A hungry mother is the first link. What maternal malnutrition can do to a child is devastating. It is a virtual guarantee of low birthweight, stunted growth, susceptibility to disease, and, too often, intellectual impairment. Mothers with small physical stature, who themselves have been victims of hunger and poverty, tend to give birth to small babies. Why this happens may be due to nutritional reasons (insufficient nutrition to the foetus) or physiological reasons (growth potential of a foetus may be constrained in a small woman). Whatever the reason, the relationship between maternal size and birth-weight is strong and consistent. [23]


Low-birthweight babies begin life disadvantaged. The potential damage from being born undernourished is compounded when further undernourishment occurs during infancy and early childhood. The first taste of poverty for a newborn is the scanty milk that comes from a malnourished mother. An anaemic mother has neither the quality nor the quantity of breast milk needed to help a low-birthweight baby. Early weaning is the usual way out but this puts the child at severe risk of infections and disease. [24] Without breastmilk, an infant's immune system does not develop properly. The infant becomes prone to such diseases as malaria, respiratory tract infections and pneumonia. A hungry mother means not just a hungry child but a sick and hungry child.


Protein-energy malnutrition during the early stages of a child's life can lead to permanent impairment of central nervous system functions. Iodine deficiency in utero and iron deficiency during infancy may even also cause permanent neurological damage. [25]


A person's physical work capacity is determined by his entire nutritional history. Early nutrition and the extent of freedom from infections leave a deep imprint. Resources permitting, some catch-up growth may occur during later childhood or adolescence, but this process is slow and often inadequate.


How an adult recognizes, thinks about and reacts, both mentally and physically, to situations is primarily fashioned by the degree of childhood development of cognitive and motor capacity. Such development is seriously affected by undernutrition, both of energy and nutrients. Studies from developing countries and developed countries as well have shown that treating undernutrition during early stages of life can enhance motor and mental development. [26] Such treatment would also reduce the differences in cognitive development due to high and low socio-economic class. Malnutrition and infections also do not allow proper school achievement by children; they affect cognitive processes such as attention and concentration. There is evidence that children who suffer from nutritional deficiencies and infections perform badly in aptitude tests. [27]


Undernourished children adopt behavioural patterns to conserve energy. These leave an imprint on the capacity to work in adulthood. Reduced physical activity is a first natural response to low energy intake. If small children are inactive and slow-moving, sleeping or lying down most of the time, these are not demonstrations of ""laziness" but reflections of behavioural adaptation to hunger. Inactive children with retarded growth do not make productive adults.


The price that undernourished children will have to pay is low productivity and low earning ability as adults. Almost always, this price is paid.


For children and mothers, the impact of inadequate food at the household level is compounded by intra-household inequities in food distribution. Often their food requirements receive a lower priority relative to the food needs of the more physically productive adults. Adults in assetless households, who seek wage employment, cannot find work easily unless they have enough nutrition to perform satisfactorily for employers. Hence, unequal food distribution in the household becomes a necessary evil.


A study of poor households in the Central Province of Sri Lanka observed that infants and children began receiving their required amounts of food only after the total food availability in the household was sufficient to ensure a minimum of 1800 calories per day per working adult. [28] Without a preference for the breadwinners, the very survival of poor households may be at stake.


Hunger has a long arm that reaches from childhood to adult life and even to the generations that follow.


What can be done?