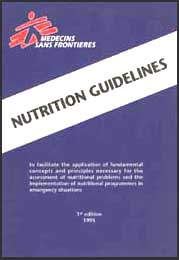 The analysis is composed of two parts:

· A descriptive analysis, which consists of building distributions according to the variables.

· An interpretive analysis where cross tabulations are used to make comparisons between groups.

The analysis uses the weight/height index values. There are two approaches when analysing and presenting results:

- the first approach estimates the proportion of children with W/H index falling below a cut off value.

- the second approach describes the whole distribution of children according to index values (= standard prevalence).

These two approaches are complementary. If the survey's objectives are to quantify the number of children who may benefit from an intensive feeding programme or from supplementary rations based on a cut-off value of the index, the first approach is the most appropriate.

However, if the objective is to assess the overall impact of a programme on the whole population of children, the second approach is preferred.

In this Part, we will only develop the first approach.

Description of the sample

The first step in the analysis is to describe the sample, by describing the distribution of characteristic variables. This will indicate if the sample is made up from eligible children. For example, a distribution according to age will give the proportion of children less than 6 months or more than 59 months, which should not have been included in the sample. An age pyramid can demonstrate an under-representation of an age group in the sample (see Annex 9).

An under-representation of an age group, such as the 6-17 months group, in the sample may reflect a higher mortality in this subgroup, but may also reflect the fact that these children were not present on the day of the survey.

In the same way, a distribution according to sex allows us to verify that both sexes are equally represented, and hence, that no selection bias has occurred.

A cluster sample survey has been carried out. The expected prevalence was 12%, the desired precision was 4%. The required sample size was 254 x 2 = 508 children, implying 30 clusters of 17 children (510 children). The following distribution according to age and sex was observed.

Expression of results with their confidence intervals

In our example the distribution by sex is not statisticaly different from an even distribution.

In our example, W/H and oedema were distributed as follows:

The two main signs of acute malnutrition described in the chapter concerning the antropometric measures are: a decrease in the value of the W/H index and the presence of oedema. The combination of these two signs and a cut off value for the index are used to define 2 classes of malnutrition:

Then these steps are repeted using - 2 Z-Scores as the cut off, in order to determine the number of the children who are defined as globally acutely malnourished (39 in our example). Again this result is expressed as a proportion of the whole sample (39 /510 + 7.6%).

In our example,the following figures are obtained:

The above formula concerns random sample or systematic sample surveys. In a cluster sample survey, the exact formula for the precision uses the prevalence observed in each of the clusters in order to take into account the design effect.

pi: proportion observed in the cluster i

In our example, calculation of the precision gives the following:

Therefore, a 95% confidence interval is:

Results would be presented as follows:

Proportion of children with oedema = 0.4%

Global acute malnutrition defined by an index < -2 Z-Scores or presence of oedema: 7.6%

Severe acute malnutrition defined by an index < -3 Z-Scores or presence of oedema: 1.0%

These results can also be expressed for a sub-group of the children, based on age, in order to avoid masking malnutrition in this group by including them in a broader group.

Global acute malnutrition defined by an index < -2 Z-Scores or presence of oedema:10.7%

Severe acute malnutrition defined by an index < -3 Z-Scores or presence of oedema: 0.8%

Expression of results with their confidence intervals

If a correction was used for calculating the sample size because the sample was more than 10% of the size of the total population, the value of n appearing in the above formulae should be the one before the correction in order to calculate the precision.

A corrected formula exists (quadratic method) which should be used for proportions close to 0% or 100%:

Some variables can be cross-tabulated. For example, nutritional status (defined according to a cut off value of the weight/height index) and the date of arrival in the camp.

Nutritional status according to the date of arrival

Such a table only gives an indication of the trend. The sample size will often not allow a stratified analysis.

Interpretation of the results in context

NOTION OF A <<SNAPSHOT>>

Figures obtained through a single cross-sectional nutrition survey only reflect the nutritional status of the population at the moment of the survey, in a certain region. Taken alone, these figures do not give any indication of the trend, whether the nutritional status is improving or deteriorating. Additional information, collected at the preparatory phase, will allow the interpretation of the results in context.

The proportion of malnutrition observed in the sample can be compared to malnutrition rates observed in a previous survey. If there is information from different surveys, some idea of the trend in nutritional status can be inferred. One can only conclude that there was a statistically significant difference between two surveys if confidence intervals do not overlap. Hence, in our example a previous survey had shown a rate of malnutrition of 15.4% + 4.4% (11.0% to 19.8%). The current situation is significantly better, since the lower limit of the first survey (11.0%) is greater than the upper limit of the current one (10.9%).

Information about infanto-juvenile mortality may suggest that a number of malnourished children have died in the past few months. The significance of the survey figures will depend on context factors such as the level of mortality and the timing of the harvest. Complementary information will help in interpreting the results. A stable nutritional situation with moderate levels of malnutrition may deteriorate rapidly if there is an outbreak of measles or a high seasonal transmission of malaria.

A <<Standard recipe>> does not exist for interpreting nutrition survey results. Interpretations and recommendations cannot be based on observed figures only.

However, when the level of malnutrition reaches certain values, emergency actions have to be taken. These actions focus on the children who are classed as malnourished by anthropometric indicators as these indicators are associated to high risk of mortality. In a population where more than 2% of children present oedema, action directed towards these children should be taken without delay. In the same way, a lower limit of the confidence interval of the proportion of children presenting an index value < - 2 Z-Scores of more than 10% depicts an alarming situation.

Survey results may be used to assess the current nutritional situation, to see if nutrition programme objectives have been reached and rates of malnutrition have been reduced. However, this measure of the impact of a programme does not allow us to assess the reasons for success or failure in reaching the objective. The anthropometric survey is just a tool which is part of a more global approach.

Writing of the report / recommendations

A report on the survey should be written as soon as preliminary results are available. Such a report should indicate the procedure used in defining the survey.

The first page should include a short summary (1 page), covering the objectives of the survey, the methodology used, the main results and recommendations. It is meant for the use of people in charge of the population in order to make appropriate decisions guided by the findings of the survey.

In the introduction, the context in which the survey was carried out should be described. What population was surveyed, at which period, in which geographic area.

Furthermore, any relevant information concerning the status of the population should also be reviewed. Nutrition programmes, surveillance data, morbidity and mortality information are included.

OBJECTIVES OF THE SURVEY

The objectives of the survey should be clearly stated. What was measured, in which population and why?

The choice of a cross-sectional survey is justified by the necessity for getting information in a short period of time. The sampling frame must be indicated as well as all parameters used, such as error risk, expected prevalence and expected precision.

The type of measuring instruments used should be noted. For example, the weight was assessed using a Salter spring scale, to the nearest 100 grams.

· Training of the data collectors

The schedule of the training and its duration should be mentioned, including the realization of a standardization test, if it was possible.

Distribution of the sample, according to age and sex is the first stage of the analysis. The mode of expression of indices should be recorded as well as the definition of grades of malnutrition used. Distribution according to the indices is presented.

INTERPRETATION OF THE RESULTS, DISCUSSION

The discussion puts the results back into the context. Comparison can be made with previous surveys, or surveys from a similar situation. Tentative explanations may be suggested at this stage.

A report should always include recommendations. A nutrition survey is meant to promote rational decision making. As an example, an intensive feeding centre might be recommended in the area if the proportion of children with severe acute malnutrition is high. On the other hand, an active screening programme through home visits can be proposed if the number of malnourished children found during the survey is much higher than the number of children currently seen in an ongoing feeding programme. A global approach might be recommended if the whole population is suffering from malnutrition. However, if the situation is demonstrated to have improved, one can recommend the interruption of a "vertical supplementary programme" and the integration of the nutrition programme in the daily MCH activities of the health system.