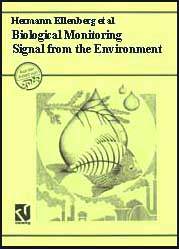 With the growing environmental problems in both the industrialized and the developing countries, suitable methods are needed for monitoring of the environment and pollution levels. In view of the inherent limitations on what can be learned from discrete physicochemical measurements, and because of the practical difficulties which these must overcome in developing countries, it is important to investigate whether "bioindicators" could be used alternatively and/or as a complementary approach for environmental monitoring in tropical and subtropical ecosystems. The aim of this volume is, accordingly, to search for possibilities and to point out approaches which could be used in future to identify and give greater consideration to ecological restraints that must be obeyed by development projects. In this context, toxin related problems are not the only aspect deserving of attention.

By necessity, each of the following articles represents nothing more nor less than an expression of the well-founded opinions of an individual who has been concerned with the topic at hand for a lengthy period of time. It would go beyond the scope of this book to include either a comprehensive discussion of individual aspects with consideration of all of the relevant publications, or a synthesis of all five papers. We have endeavored, above all, to point out possibilities. They are intended to give the reader inspiration and ideas, if he or she is involved in dealing with the consequences which human activities have for the environment and environmental monitoring.

Nearly all of the experts contacted have made generally acknowledged contributions to the use of bioindicators for specific applications. However, most of these men and women have expressed basic skepticism and disapproval towards attempts to indiscriminately generalize biological monitoring techniques that have proven their worth under specific environmental conditions. In particular, they have reservations towards the attitude that biological monitoring is primarily a relatively inexpensive method of monitoring temporal and spatial trends in environmental change. This attitude may be justifiable up to a certain point, provided that precisely defined field and laboratory methods are available. However, this is normally the case only after lengthy and staff-intensive research work, often involving intensive use of expensive equipment, has already been performed. Knowledge derived from such efforts exists in only a small number of countries. There is an even greater lack of essential prerequisites in many developing countries compared to some industrialized nations, especially as concerns knowledge of species and their natural history.

The most urgent task thus appears to be the establishment of and continuous support for research teams whose members possess knowledge of regional sociological, economic and ecological factors, as well as an extensive theoretical background. Even in Central Europe, few such research groups exist. They have already been publishing their results for many years, pointing out the irreversible ecological changes which could be brought about within the space of just a few human generations. Yet it was not until fairly recently that their warnings began to be taken seriously, and for this to happen political movements at the so-called grassroots level have had to force our so-called leaders to increasingly take them into account in their well-meant planning and forecasts.

Politics, industry, legislation and the classical natural sciences are all dominated by the belief that it is fundamentally possible to demonstrate clearcut relationships between causes and effects. The sad truth is, however, that monofactorial causal relationships are rare in ecosystems. As a consequence of this, ecologists usually look upon scientific results differently than the above-mentioned groups. From their experience with complex, highly intricate ecological structures, ecologists tend to take a cautious, perspicacious and reserved approach to things. Only in exceptional cases can the immediate effects, and much less the long-term impact, of direct and indirect intervention in ecosystems be predicted or demonstrated with the certainty and clarity demanded by politics, industry and legislation.

In societies that are characterized by competition, vacuums - even those of an argumentative nature - are quickly occupied by groups of individuals whose actions are governed first and foremost by what is likely to further their own personal advantage. This is no different in nature; no unoccupied ecological niches are left vacant for idealistic reasons there either. Instead, if at all possible they are filled and exploited. The yardstick for measuring the success of such "action" in nature is whether the organisms in question manage to produce young that are in turn capable of reproduction. At the limits of the capacity of a biotope to support a given species, this aim is striven for by the parent generation with enormous expense of energy, and is accompanied by losses in the next generation that are difficult to accurately predict in any specific instance. Even the most highly specialized "C strategist" ) maximizes the number of its offspring as far as possible under the given circumstances.

It can thus be seen that a number of practical problems are urgently in need of solution in order to permit a consensus to be reached by all concemed on the results of ecological research. Optimization of the future limits to be placed on utilization of natural resources is something only human beings can strive for, and then only if understanding of ecological relationships goes hand in hand with the achievement of compatible behavior at the sociological, economic and political levels. If the individual is to preserve the high status which has hitherto been awarded to him in human society, then this cooperation must be put into practice much more effectively than has been the case in the past. In nature, by contrast, need and misery are everyday events.

The author would like to thank Dr. PLUSCHKE and with him GATE and the Deutsche Gesellschaft fhnische Zusammenarbeit (GTZ) GmbH, who organized this project, for giving him the opportunity to present his points of view here. He also had occasion to personally visit and/or hold lengthy telephone conversations with a large number of experts in these and related fields. In addition to all of the authors of this volume, I owe special thanks to the following persons:

These contacts, study of current literature, and travel for the purpose of this project took place for the most part during the fall and winter of 1984/85. This is also true for the majority of the coauthors. Only Dr. Bretthauer, the limnologist, was later invited to present a contribution on his field of specialization. The authors' papers were discussed at two workshops, in 1985 and early 1988, organized by the GTZ. Appropriate coverage of the literature up to about 1984 has been achieved in the majority of the contributions. Updating was possible only in some cases. Nevertheless, the main lines of thinking and of practical work developed and diversified particularly rapidly during the late seventies and early eighties, most of which are referred to by the authors. Therefore we think that a publication today is worthwhile in that it may encourage readers the world over to focus their interest on the dwindling natural resources of life. It is hoped that it will stimulate them to ask questions as to how to become aware of and monitor change and the impacts of pollution in ecosystems, and how to help nature persist and recover in spite of growing human populations and so-called developments in technology and agriculture which all too often burden our ecological environment, the environment which at the same time is the basis of our lives.