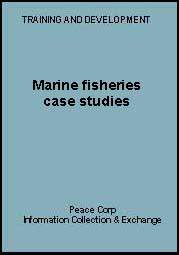 Appendix A: Limitations of Data

Most of the background information used in developing the material presented in the case studies was found in Peace Corps files, including those of the office of Programming and Training Coordination, country desk officers, and the ACTION Library. Some materials were received from returned Peace Corps volunteers involved in those projects studied as well. Most of the statements male in evaluating success and failure of Peace Corps marine fisheries projects came from Peace Corps evaluations; however, some statements made are based upon the perceptions of returned volunteers themselves, especially when no formal evaluations were ever made. Perceptions change over time, and most volunteers contacted agreed that they were perhaps remembering only the very good or very bad aspects of their tours. Thus these case studies should not be considered as the final verdict in any case, but as the perceptions of evaluators, programmers, trainers, staff, and volunteers involved in marine fisheries projects. There were also gaps in the data that could not be filled.

Data from returned volunteers was gathered through telephone conversations and letters. Volunteers were asked questions to start their thinking about projects, some of which occurred 18 years ago. Others merely talked about projects, giving their own views with little prompting from the researchers. A sample questionnaire used for this purpose follows.

1. Flow many volunteers were in your project? At the beginning? At the end of two years?

2. What pre-Peace Corps education, training and experience in marine fisheries did you have?

3. What training did you have prior to placement in-country?

4. What was your primary job as a volunteer? Your secondary job?

5. Did your project have clearly defined objectives? Did you know what these were?

6. What were the objectives of the project? Were PC objectives the same as those of the host country?

7. Was there support for the project? From PC? From the host country government? What kind of support:

8. If not working for the government, who provided support and guidance for your project?

10. Did you complete your project? Why did you and other volunteers in your program leave the project:

11. Did you perceive problems during the course of the project? If so, did you make recommendations to the Peace Corps? To the host country government?

12. Were such recommendations acted upon? Did such actions improve the situation? Why or why not?

13. Did you have enough to do? Was your job dependent upon outside support?

14. In your opinion, did the project fulfill original objectives of PC? Of the host country government? Why or why not? How?

16. What was your group's feelings about continuing the project in your country? In another country? What is your feeling about this?

18. Is the project still going on? If not, why do you think it stopped?

19. Any further comments on training, abilities of volunteers to do the job, support from PC, host country, private donor organizations, other volunteers, and evaluations of PC projects.

20. Can you suggest other people in your program who should be contacted for information?