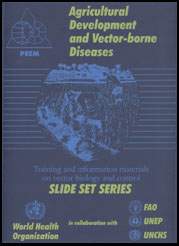 At its 7th meeting at FAO, Rome in 1987, the joint WHO/FAO/UNEP Panel of Experts on Environmental Management for Vector Control reviewed the effects of agricultural development in its broadest sense on vector-borne diseases. In addition to its traditional focus on water resources development for irrigation, the Panel focused its discussions on other aspects of agricultural development: cropping patterns, chemical inputs, the introduction of new varieties, mechanization and items pertaining to fisheries and forestry. A few years later, at its 1990 meeting, also in Rome, an in-depth review of the links between livestock management and human vector-borne diseases was carried out.

Several technical recommendations emerged from both meetings and, in particular, the collaboration with some of the CGIAR institutions was strengthened as a result. The WARDA/PEEM/IDRC Research Consortium Project on the association between rice production systems and vector-borne diseases in West Africa would not have taken shape so fast without this review, and progress towards the implementation of health research activities in the Environment and Health Programme of the International Irrigation Management Institute in Sri Lanka would have missed an important impulse.

The information collected for and generated by the 7th PEEM meeting was published in the FAO publication Effects of Agricultural Development on Vector-borne Diseases (AGL/MISC/12/87). The Panel recommended that, in addition, a set of visual training aids be developed for use in awareness creation, training and education activities. The production of this slide set was commissioned in 1992. After review and further refinement, a final, prototype set was ready by 1994, but it was not until 1996 that, thanks to the financial support of the United Nations Environment Programme, a first batch of slide sets could be produced for marketing.

The health dimensions of the extensive environmental change we are witnessing in the last decades of the 20th century are complex and probably only matched by the health dimensions of the extensive social change occurring at the same time. In all parts of the world, policy and decision makers are grappling with a transfer from a strictly economics-driven development to true sustainable development. This slide set aims to help them and future professionals to visualize specific agro-ecotypes, relate them to their local conditions and develop effective preventive solutions to equally specific local health problems.

The Panel of Experts on Environmental Management for Vector Control (PEEM) was established in 1981 as a joint activity of the World Health Organization, the Food and Agriculture Organization of the United Nations and the United Nations Environment Programme. The Panel’s objective is to create an institutional framework for effective interagency and intersectoral collaboration by bringing together various organizations and institutions involved in health, land and water development and the protection of the environment, with a view to promoting the extended use of environmental management measures for disease vector control in development projects. The PEEM Secretariat is located in the Division of Operational Support for Environmental Health of WHO in Geneva, Switzerland.

In 1991 the three agencies were joined by the United Nations Centre for Human Settlements (UNCHS/Habitat) and the Panel’s mandate was expanded to include health issues relating to human settlements in the context of development and the provision of drinking water supply and sanitation, and urban environmental management for disease vector control. At the time of publication of this slide set, the global PEEM network consists of 40 experts and fifteen collaborating centres representing a range of relevant disciplines.

The WHO Slide Set Series on vector Biology and Control contains twelve sets, eight of which concentrate on a single vector or group of vectors. Of the remaining four, the present set and the set on Environmental Management for Vector Control have been prepared under the auspices of PEEM.

The production of this slide set was commissioned from Mr Tom H. Mather, CEng MICE, who designed the set’s structure, collected the slides and drafted the captions and accompanying text. Within the limited resources available, Mr Mather was able to successfully carry out his assignment, drawing on his many contacts dating back to his position as Service Chief, Water Resources, Development and Management in FAO, Rome. The photo libraries of both FAO and WHO proved valuable sources of material, but many others contributed and these inputs are individually acknowledged at the start of each section, where the slides are listed. The accompanying text was further developed by Hans Verhoef, at the time Associate Professional Officer in the PEEM Secretariat and currently Research Associate of Wageningen University in the Netherlands. Jacob Williams, Associate Professional Officer in the PEEM Secretariat at the time of publication of this set, assisted in completing the text with disease profiles and in its assembly.