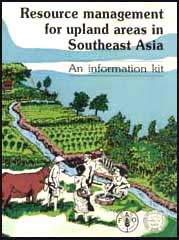 This form of low-input agriculture and fallow management is common in Southeast Asia, particularly in rice, taro and cassava-based systems. It is also commonly referred to as swidden cultivation. If managed properly, it can be considered a sustainable practice, particularly in sparsely populated areas. In this system, the underbrush is cut, then most of the trees are felled. Certain tree species are left to stand and branches are pruned. In most places, underbrush is burned; but in parts of Papua New Guinea, no-burn practices are used. The branches and leaves are slashed and may be laid along the contour. Food crops are then planted using minimum tillage practices, such as dibble or digging sticks.

Slah and no burn

Slowly releases nutrients from the forest biomass to the soil (no-burn practice in Papua New Guinea).

Minimizes direct impact of raindrops on soil surface (no burn).

Optimal planting density cannot be obtained on sloping land due to difficulty of planting.

· Not suitable for fallow under 10 years due to existence of undesirable weedy species. (Papua New Guinea)

· Suitable only in areas with low population density.