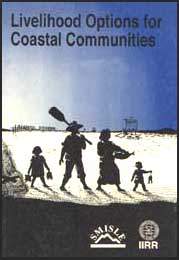 Throughout the world, coastal areas are under increasing pressure from human activities and burgeoning populations. An estimated two billion of the world's population depend on marine resources for protein, settlement and income. In developing countries, more than half of the population is in coastal zones. This effectively exacts tremendous demands on the coasts for food and other economic purposes. The ensuing scenario depicts a significant deterioration of the coastal environment.

The Philippines is no exception to this reality. The country's marine waters are five times greater than its land area. Its territorial waters total 220 million hectares, 26.6. million of which are considered coastal. Add these to the coastal land areas in the more than 7,000 islands of the Philippines and one can approximate the natural resources available to its people. However, the high rate of population growth— estimated at 2.4 percent from 1980-1990—and the practically unmanaged economic activities typical of developing nations have contributed greatly to the poor state of the Philippines' marine resources.

Destructive fishing methods, such as cyanide and blast fishing, and the use of nets with very small mesh sizes have been widely practiced for the past several years in response to a growing need for food and income. Unfortunately, these methods are quite deadly in their efficiency; for they facilitate greater harvest not only of needed resources but also of unwanted species, e.g., juveniles. If allowed to grow to maturity, these juveniles will provide future needs. Destructive fishing likewise inflicts a lot of damage to the surrounding areas to the detriment of valuable resources.

Similary, tourism—in spite of its advantages—poses a threat to the country's marine resources. The government, in its effort to push the nation to economic security, actively promoted tourism. However, the country is not quite prepared to adequately address the industry's potential negative impacts, such as unchecked collection of corals, illegal trade of endangered species, etc.

To date, coral reefs with excellent growth cover approximate only five percent. Vital mangrove areas throughout the country have shrunk to less than one percent of its area in the 1920s. Not suprisingly, fish yield data show that Philippine capture fisheries suffer from considerable overexploitation.

The Philippines' archipelagic nature is such that 80 percent of its provinces are surrounded by the sea and 65 percent of the towns are considered coastal. With the increasing threats of overexploitation, overpopulation and a worsening poverty situation, coastal resources management becomes imperative.

An integral part of coastal resources management is the provision of access to livelihood opportunities that help reduce pressure on coastal resources by utilizing previously untapped resources. However, the implementation of any technology requires not only technical training but preparing the community as well. Potential users should be duly informed of the advantages and disadvantages of the technology, in view of its economic impacts and current environmental conditions.

This publication—Livelihood Options for Coastal Communities—arose from perceived existing problems in Philippine coastal areas, particularly in Sulu, Basilan and TawiTawi. The aim of this book is to provide access to various livelihood activities feasible in the said areas. An IIRR study has yielded insights into the nature of the coastal resources-related concerns. The present work summarizes the necessary information gathered during the year of study in the three provinces mentioned earlier.

This book will hopefully be useful for teachers and extension workers engaged in information dissemination and technology transfer in coastal communities.