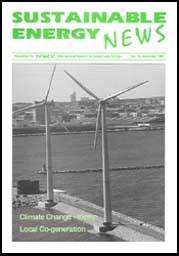 A number of organisations in the INFORSE network participated in UNESCO's 5th World Conference on Adult Education (CONFINTEA V) in Hamburg in 1997, having been invited by UNESCO to develop the environmental theme in adult education for the next century. These organisations agreed to launch an initiative to help environmental organisations to gain better access to and cooperation with media at all levels. The aim of this is to increase political awareness and the effectiveness of popular education activities.

"Media" was understood as covering traditional media such as drama, storytelling, dance, etc., as well as more 'modern' media such as radio, newspapers, television, video, the Internet, etc.

The initiative will bring together people working with media and with environment to create dialogue and mutual inspiration, exchange information about experiences, and develop cooperation projects, All of this will be done in the framework of a five-year programme.

An INFORSE task force is now preparing a workshop to be the first event in the initiative. The objective of the workshop is to create a platform for a future cooperative programme among environment and media people and to increase participants' knowledge of how environmental education and awareness can be achieved via 'living pictures', i.e., video, film, and television.

The workshop is tentatively scheduled for 18-22 June 1998 in Denmark, just before "Environment for Europe", the 4th Pan-European Conference of Environment Ministers, June 23-26, hus,
Denmark.

The INFORSE Secretariat welcomes proposals and ideas for the workshop as well as for the 5-year programme.

On January 26-30, '98, the INFORSE coordinators will meet at ENDA in Dakar, Senegal. Among the topics to be discussed are a new INFORSE Action Plan with follow-up of adult-education activities, south-south cooperation, and new themes for INFORSE cooperation as well as campaigns.

Proposals from INFORSE member organisations are welcome and will be discussed during the meeting.
Proposals should be sent to the INFORSE Secretariat, and must be received by January 9, 1998.