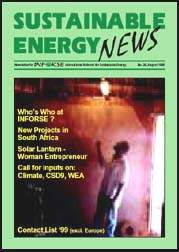 In the EU Commission, two directives are under preparation that will affect the development of renewable energy in the EU. The most advanced is a revision of the EU Directive of State Aid, regulating which kinds of subsidies and other measures the EU countries can have to support, e.g., renewable energy and energy-efficiency solutions. It sets an important framework for national policies for sustainable energy and should be studied carefully, when published. The text of the directive is currently being negotiated in the Commission. It is likely to be proposed from the Commission to the EU countries after the new Commission is in place in September.

The other upcoming directive will regulate renewable energy in the open electricity market. As mentioned in Sustainable Energy News No. 25 (May’99), the Commission published a working paper and invited comments on the issue in the spring.

The EU Energy Ministers welcomed the initiative at their meeting in May, and asked the Commission to go forward with a directive. They recommended a directive that would set a framework for national policies, and that would not require any single system for all countries.

Sources:
Greenpeace European Unit and others.