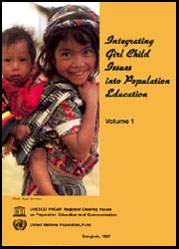 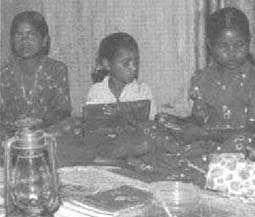 Of the approximately 130 million out-of-school children, about 81 million are girls. Two-thirds of the estimated 948 million illiterate adults worldwide are women.48

All surveys and research findings reiterate that investing on educating girls and women is the best possible investment for development. Educated women are better able to perform their roles within the household, in the workforce and in the community.

Experts agree that education of girls and women is associated with reduced fertility. But to have a strong impact on fertility a girl must have completed primary school and have some secondary school education. With only literacy or with a few years at the primary school level education, fertility does not decline because it is not likely to delay marriage or increase awareness or modern birth control methods. But secondary level schooling is likely to delay marriage and increase a woman's awareness. Many studies have shown a correlation between girls having eight years of education and the use of contraception.

The most important link between female education and reduced fertility is the effect of education on the age at marriage. Delayed marriage delays the first pregnancy and the effect of this on the macro level is significant. Moreover, delayed first pregnancy reduces the fertile span in a woman's life. “In Brazil, for example, the average family size for women with secondary education is 2.5 children, compared to 6.5 children for women with no education.”49

Education improves a woman's awareness of her own worth, and the worth of daughters. The number of children and the number of sons which women consider desirable, decreases with increase in education. They are less likely to be influenced by family pressure and are aware of opportunities and fulfillment beyond motherhood.

There is considerable evidence that total fertility rate and infant mortality are strongly linked. Moreover, mortality of female children, especially in households with scarcity of resources, is likely to decline when mothers have some education. This is partly because values may change and partly because educated girls have the potential to get paid employment.

“Each additional year of schooling for girls has been found to result in decline in child mortality in the range of 5 to 10 per cent.”50

In Sri Lanka, the total Fertility Rate is 2.4 children per woman and infant mortality rate is 19; in the Republic of Korea, the rates are 1.8 and 17 respectively.51

3. Better health, nutrition and improved quality of life of family

They are likely to take more care about the diet and nutrition of the family and follow sound standards of hygiene.

Women who have received some education are able to help their children to acquire basic educational skills of numeracy and literacy. They are more aware of the value of educating girl children.

They are likely to use their time more efficiently and be more receptive to new ideas.

Employment opportunity and earning capacity improves with education. In India for example, earnings of women who had completed high school were one and a half times greater than those without any education and women with technical training earned three times more than did illiterate women.52

Studies show that each extra year at school gives a girl the potential to earn 10 to 20 per cent higher wages.

When a woman has access to a stable sources of income and need not depend on her children's labour, her perception changes. Children no longer represent a source of income but rather a cost; this gives a further incentive for fertility control.

A high level of socio-economic development is associated with women's access to education. Educated women are in better control of their own lives and are better able to take care of their children. They have wider opportunities and higher earning power. As more and more girls are educated, they can be the catalysts of development.

Chart 19: Women, the focus of the nineties

Some Beneficial Effects of Women’s Education

A woman’s education is the single most important factor in determining how many children she bears and whether they survive.